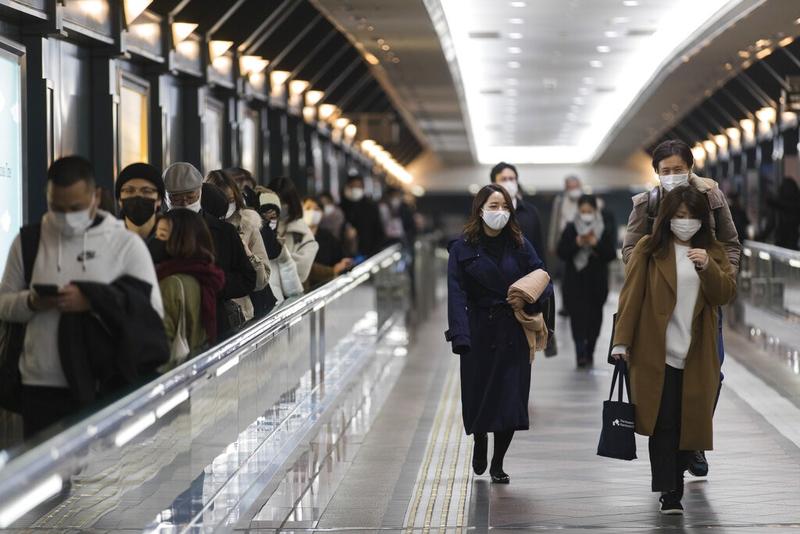 People wearing face masks to prevent the spread of the coronavirus walk towards a train station in Tokyo, Japan, Jan 22, 2021. (HIRO KOMAE / AP)

MELBOURNE / RAMALLAH / SINGAPORE / MANILA / NEW DELHI / BANGKOK / ULANBAATAR / TOKYO - Japan's COVID-19 death toll topped 5,000 on Saturday, according to the latest figures released by the health ministry and local authorities, as the country battles to contain a resurgence of infections.

By prefectures, Osaka has the highest number of deaths with 812, followed by Tokyo's 770 and Hokkaido's 561.

The capital Tokyo reported 1,070 new cases on the same day, the smallest daily increase since Jan 12.

The drop comes as Japanese officials next week are set to examine the effectiveness of the nation’s strategy to contain the spread of the coronavirus.

Prime Minister Yoshihide Suga declared the emergency for Tokyo and adjacent areas on Jan 7, with residents requested to avoid going out after 8 pm and bars and restaurants to be instructed to close at that time, to address an alarming surge in cases.

While the areas under the emergency that is set to run until Feb 7 have already been expanded once, there are chances it may be extended, and the areas under its purview could be broadened yet again.

While declaring the emergency earlier this month, Suga indicated it would take two weeks for the effects to show up in daily infection numbers. On Friday, which marked that point, Tokyo reported 1,175 virus cases, indicating that the explosive growth being seen in new infections appears to have at least blunted. That also brought, for the first time, the seven-day case average below the level it was at the day the emergency was declared.

The Department of Health (DOH) of the Philippines reported on Saturday 1,797 newly confirmed COVID-19 cases, bringing the total number of confirmed cases in the Southeast Asian country to 511,679.

The DOH said there was no evidence of community transmission following the detection of the more contagious COVID-19 variant first found in Britain in 17 patients in the Philippines.

On Friday, the DOH said the country has detected 16 new cases of the UK variant. Of the 16 patients, three have already recovered, the DOH said. 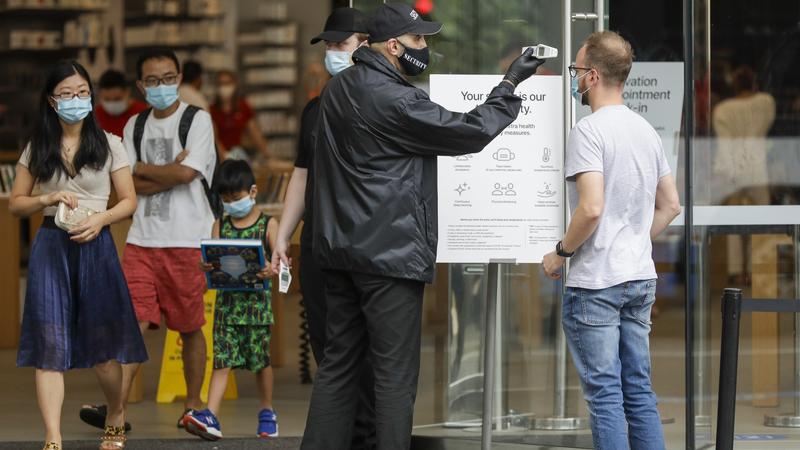 A security guard takes the temperature of a customer at a shopping precinct in Sydney, Australia, Sunday, Jan. 3, 2021. (MARK BARKER / AP)

Domestic border restrictions are gradually easing across Australia as the nation reported zero locally transmitted virus cases for a sixth straight day, a sign that authorities are successfully containing clusters which reared up in Sydney just before Christmas.

The Western Australian state government said it would soften its lockdown policy toward New South Wales and Queensland from Monday, but travelers would still be required to test and isolate for 14 days upon arrival. Meanwhile, Victoria, which notched its 17th consecutive day of zero locally acquired cases, relaxed restrictions to allow most Sydneysiders entry to the state, where further social distancing regulations limiting gatherings were also wound back.

There were three new cases recorded among international arrivals in hotel quarantine in Victoria, the state’s health department said. One of those was associated with the Australian Open, said the state agency responsible for quarantining overseas travellers.

Meanwhile, three people in hotel quarantine associated with the Australian Open have tested positive for the highly transmissible coronavirus variant linked to the United Kingdom, officials said. The three are not players, the quarantine agency said.

Australia has fared better than most developed economies in the pandemic through swift border closures, lockdowns, strict hotel quarantine for travellers and widespread testing and social distancing. It has had some 28,700 cases in total, the overwhelming majority in Victoria, and 909 deaths.

Education Minister Alan Tudge said that the return of international students to the country is dependent on the availability of vaccines.

"These numbers are expected to rise substantially in the coming weeks, as we continue to ramp up our vaccination capacity and operations, while maintaining the highest standards of safety," he said at a press conference.

According to Gan, Singapore will begin its first phase of community vaccination next week for the seniors.

He also noted that there was an increase in the number of locally transmitted cases. "In the past week alone, there were an average of three cases in the community a day," he said, adding that four clusters have been discovered recently involving mainly workplace and household transmissions.

On Friday, Singapore reported one case of community transmission and 14 imported cases, bringing the total number of confirmed cases to 59,250.

Thailand on Saturday reported 198 new coronavirus cases, including 18 imported ones, bringing its total number of infections to 13,302.

One additional death was reported, taking the total number of coronavirus-related fatalities to 72, a COVID-19 taskforce said. 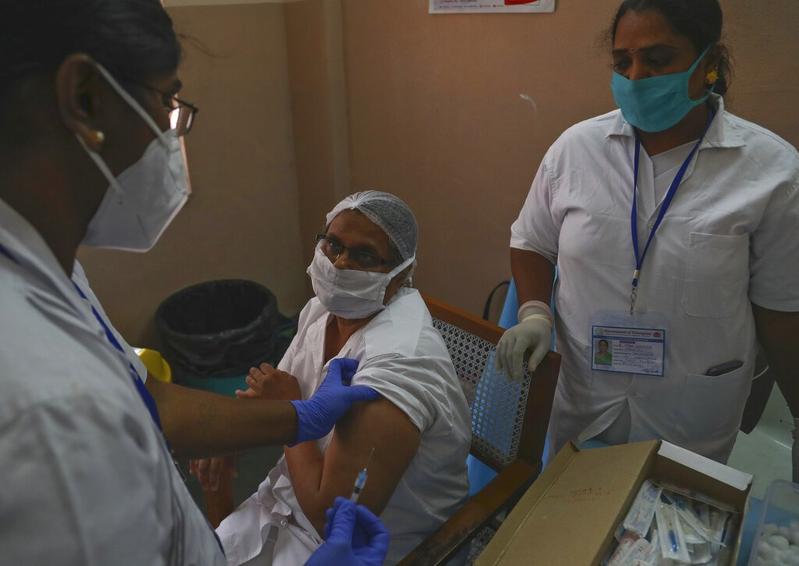 The India government on Saturday said that more than 300,000 people were vaccinated against COVID-19 in a day for the first time since the nationwide vaccination drive kicked off last week.

The highest number of vaccinations was carried out on Friday.

Nearly 1.4 million people have been inoculated, according to the ministry.

There are still 185,662 active cases in the country, while 10,300,838 people have been discharged from hospitals after medical treatment.

So far, more than 1.3 million people have been vaccinated across the country since the nationwide vaccination drive kicked off last Saturday.

Mongolia registered 19 new COVID-19 cases in the past 24 hours, bringing its tally to 1,611 with two deaths, the National Center for Communicable Diseases (NCCD) said Saturday.

The new cases were locally transmitted, the NCCD said in a statement, adding that 28 more patients have recovered from the disease.

Mongolia further eased it's COVID-19 restrictions on Saturday, allowing all clothing markets and hair salons in the capital Ulaanbaatar to reopen, the State Emergency Commission said.

Meanwhile, a ban on all kinds of gaming, religious and entertainment services, bars, saunas and mass gatherings such as sports events and cultural activities in the city will stay unchanged, according to the authorities.

Palestinian health officials warned on Friday of the spread of a new coronavirus strain in the Palestinian territories after recording the first 17 cases of the new variant.

"The new strain of the coronavirus is considered to spread more rapidly among the population. Also, it may infect all ages of the people," Health Minister Mai al-Kaila said.

The minister said the health ministry recorded 12 additional fatalities, 494 new COVID-19 cases, and another 792 recoveries in the Palestinian territories.

Turkish President Recep Tayyip Erdogan announced Friday that 10 more million doses of COVID-19 vaccines are expected to arrive from China by the end of this week.

Speaking to reporters after Friday prayers in Istanbul, Erdogan said that the second batch of the vaccines, developed by the China's Sinovac, has been approved. 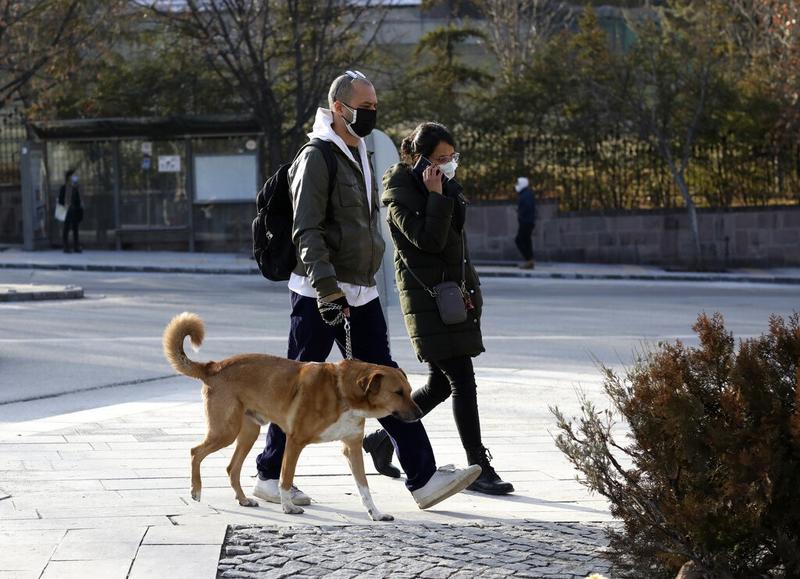 People wearing masks walk on a street in Ankara, Turkey, on Jan 22, 2021, ahead of the start of a two-day weekend curfew. (BURHAN OZBILICI / AP)

Israel will be launching a COVID-19 vaccination operation for all high school students aged 16 and over, the Ministry of Health said on Friday.

The vaccination drive, which will cover more than 300,000 students, is expected to begin in the coming days.

The number of people vaccinated against COVID-19 in Israel has surpassed 2.46 million, or 26.5 percent of its total population, since the vaccination campaign began on Dec 20, 2020.

Of the new cases, 589 needed to be hospitalized, Sima Sadat Lari, spokeswoman for Iran's Ministry of Health and Medical Education, said at her daily briefing.

She said that another 75 deaths were registered, raising the death toll to  57,225.

A total of 1,151,676 patients have recovered while 4,134 others were currently in critical condition.

The ministry said seven more deaths were logged, raising the death toll to 12,984.

The Qatari health ministry on Friday reported 263 new COVID-19 infections, raising the total number of confirmed cases in the Gulf state to 148,521.

The ministry said another 141 patients have recovered, bringing the overall recoveries to 144,619, while the number of fatalities remained at 248.