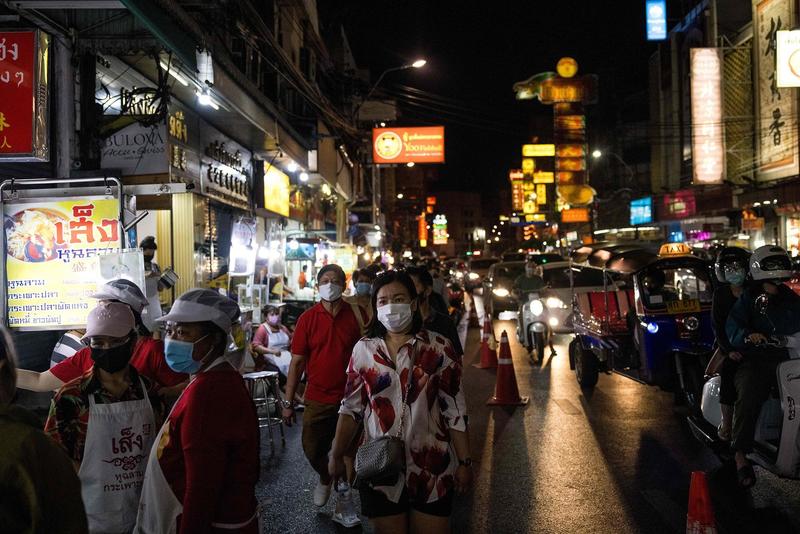 Thailand’s Food and Drug Administration granted the approval for the vaccine on Thursday, Health Minister Anutin Charnvirakul said by phone. AstraZeneca is the first coronavirus vaccine developer to win approval in Thailand, which also has ordered shots developed by China’s Sinovac Biotech Ltd.

“Now we’ll have to wait for the vaccines to be shipped to Thailand, which we’re speaking with the company about,” Anutin said.

Thai government has ordered 61 million shots of AstraZeneca vaccine, which has won approvals for emergency use in countries including India, the UK and Brazil. The regulatory nod will also open the door for imports by private Thai companies for administering the doses to people who can afford to pay.

Thailand, which was relatively successful last year in containing the pathogen, is betting on wider availability of the vaccine to revive its tourism-reliant economy that’s devastated by the pandemic. The Southeast Asian nation has set a target of inoculating at least 50 percent of the nation’s population before the end of 2021 as it battles a new wave of infections that’s seen total cases almost triple in the past month to almost 13,000.

Bangladesh on Thursday received 2 million doses of COVID-19 vaccine "Covishield" developed by Oxford University and AstraZeneca as a gift from India.

At a ceremony in Dhaka, Indian High Commissioner to Bangladesh Vikram Doraiswami handed over the vaccine, manufactured by Serum Institute of India, to the Bangladeshi side.

The Bangladeshi government has already decided to procure 30 million doses of the COVID-19 vaccine from Serum Institute of India.

The first shipment of imported doses is expected to arrive in Dhaka by Jan 25.

Bangladesh reported 584 new COVID-19 cases and 16 new deaths on Thursday, making the tally at 530,271 and death toll at 7,966, the Directorate General of Health Services (DGHS) said.

Brunei recorded 260 days without local COVID-19 cases on Thursday, with the national tally of confirmed cases remaining at 174.

According to Brunei's Ministry of Health, no more recoveries were recorded, keeping the total number of recovered patients at 169. There are two active cases still being treated at the National Isolation Center.

A total of 33 imported cases have been confirmed since the last local infection case was reported on May 6, 2020.

Meanwhile, there are currently 623 returned overseas travellers in mandatory isolation at the monitoring centers provided by the government.

There have been three deaths reported from the COVID-19 pandemic so far in Brunei.

Indian Prime Minister Narendra Modi will get a coronavirus shot in the second phase of the country’s inoculation campaign, broadcaster NDTV reported on Thursday citing sources, as many states struggle to meet targets partly due to fears over possible side-effects.

India's COVID-19 tally rose to 10,610,883 on Thursday as 15,223 new cases were registered during the past 24 hours, said the latest data from the federal health ministry.

There are still 192,308 active cases in the country, while 10,265,706 people have been discharged from hospitals after medical treatment. It was the first time on Wednesday, in nearly seven months, when the number of active COVID-19 cases in the country fell below the 200,000-mark.

Indonesia has given the first dose of COVID-19 vaccines to 60,815 people in the first week of its mass inoculation program. The Southeast Asian nation aims to inoculate 181.5 million people, about two-thirds of its population, by the end of the year to curb an infection that has sickened over 900,000 people across the country and killed more than 26,000, the highest in the region.

The pandemic has so far claimed 57,150 lives in Iran, up by 93 in the past 24 hours, said Sima Sadat Lari, spokeswoman for Iranian Ministry of Health and Medical Education, during her daily briefing.

Of the newly infected, 677 were hospitalized, Lari added.

It also reported six new deaths, raising the death toll from the infectious virus in Iraq to 12,968, and 1,909 more recovered cases, bringing its total recoveries to 574,920.

It also reported ten more cases of the new COVID-19 strain, bringing the total number of patients tested positive for COVID-19 variants in Israel to 169.

Lebanon is facing a very dangerous pandemic situation amid an unprecedented increase in the number of infections and the inability of hospitals to receive an increasing number of COVID-19 patients.

Health Ministry Director-General Noor Hisham Abdullah said in a press briefing that eight of the new cases were imported ones, and the rest 3,162 were local transmissions. 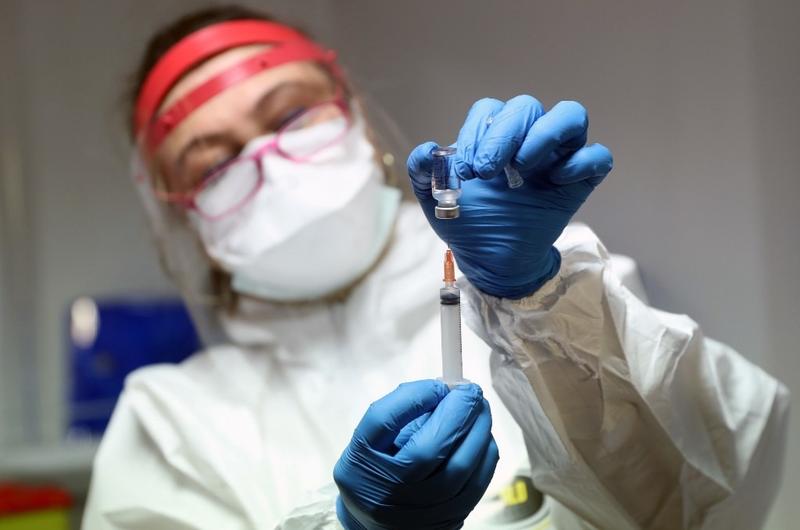 A health care worker prepares a dose of the CoronaVac vaccine at a nursing home in Ankara, on Jan 19, 2021. (ADEM ALTAN / AFP)

Mongolia added 16 COVID-19 cases in the past 24 hours after 12,940 tests had been conducted across the country, the National Center for Communicable Diseases (NCCD) said Thursday.

The latest cases were locally transmitted or detected in the country's capital Ulan Bator, Amarjargal Ambaselmaa, head of the NCCD's Surveillance Department, said at a daily press conference.

Mongolia has confirmed a total of 1,584 COVID-19 cases so far, including more than 1,100 locally transmitted ones.

Meanwhile, 13 more patients have recovered from the disease, taking the total to 1,046.

Myanmar expects to start inoculating its nearly 55 million population from next month, the Health Ministry said on Wednesday. The nation expects to receive the first batch of Covid-19 vaccines from the Serum Institute of India in the coming weeks, according to Khin Khin Gyi, director of emerging infectious disease at the ministry.

In Qatar, 271 new COVID-19 infections were announced, raising the total number of confirmed cases to 148,000, while 132 more recovered from the virus, bringing the overall recoveries to 144,350. The fatalities remained 248 in the Gulf state for the third day running.

South Korea reported 401 more cases of COVID-19 as of midnight Thursday compared to 24 hours ago, raising the total number of infections to 73,918.

The virus spread showed signs of moderating this year, but the daily number of infections hovered above 100 since Nov. 8 owing to small cluster infections in Seoul and its surrounding Gyeonggi province as well as imported cases.

Of the new cases, 122 were Seoul residents and 133 were people residing in Gyeonggi province.

Twenty-one were imported from overseas, lifting the combined figure to 6,031.

Sri Lanka fully reopened its borders to tourists and international arrivals from all countries on Thursday. 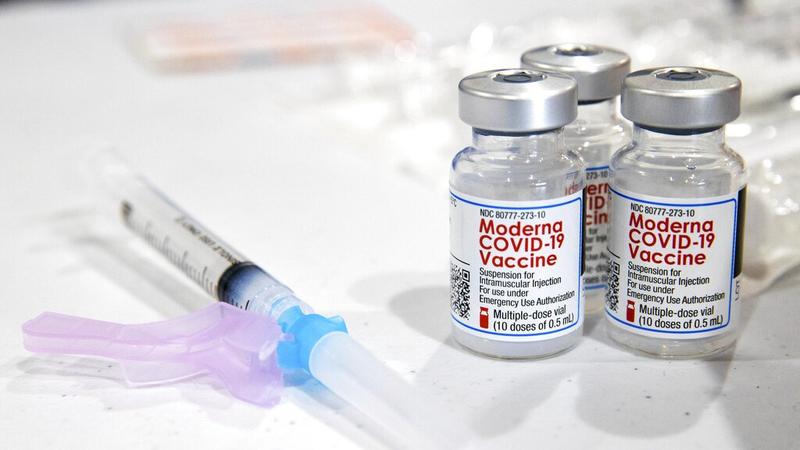 In this Jan 9, 2021 file photo, vials of Moderna's COVID-19 vaccine are placed next to a loaded syringe in Throop, Pennsylvania. (CHRISTOPHER DOLAN / THE TIMES-TRIBUNE VIA AP)

The Philippines is nearing a deal with Moderna Inc. for as much as 20 million vaccine doses as it monitors a post-holiday spike in coronavirus cases outside Manila.

A supply deal with Moderna will likely be finished this month, Carlito Galvez, who leads the vaccination program, said in a televised briefing on Thursday. The nation is also expecting to receive fewer doses from the World Health Organization-backed Covax Facility, he said.

Infections outside the Manila capital region are rising. “People went back to the provinces during the holidays and had festivities, so that may have contributed to the increase,” Health Undersecretary Maria Rosario Vergeire said at the same briefing.

Dubai has suspended non-essential surgery for a month and live entertainment in hotels and restaurants until further notice as coronavirus infections surge in the Middle East trade hub.

The decision to postpone certain surgeries, which takes effect midnight on Thursday and could be extended, was aimed at ensuring the preparedness of health facilities to manage COVID-19 cases, Dubai’s health regulator said in a circular published on Wednesday.

Dubai’s tourism department issued a circular, seen by Reuters, suspending entertainment in hotels and restaurants after recording an increase in violations of coronavirus precautions.

Daily cases in the United Arab Emirates hit a record 3,506 on Wednesday, the highest in the Gulf Arab region where daily tallies in each of the other five states have fallen below 500.

Turkey announced on Wednesday that the country has so far vaccinated 1.04 million citizens during the first week of its nationwide mass inoculation program against COVID-19. Meanwhile, Lebanon registered 64 COVID-19 deaths, the highest daily increase recorded for the second consecutive day.

The vaccination process started across Turkey on Jan. 14 with the vaccines developed by Chinese company Sinovac. Over 1 million healthcare workers were among the first group to get vaccinated, followed by citizens living and working in nursing homes, disabled care centers, and care homes.

Meanwhile, Turkey plans to resume face-to-face education in mid-February with the "highest capacity possible" amid the ongoing mass vaccination process against COVID-19.

Vietnam recorded two new confirmed cases of COVID-19 on Thursday, raising its total tally to 1,546 with 35 deaths, according to its Ministry of Health.

Both new cases are Vietnamese citizens who recently entered the country from abroad and were quarantined upon arrival.