India 'could produce 500m vaccines a month for export'

A vial of the Covishield vaccine, developed by Oxford-Astrazeneca Plc and manufactured by Serum Institute of India Ltd, in a cool box at a vaccine center in the Bandra Kurla Complex hospital in Mumbai, India, Jan 16, 2021. (PHOTO / BLOOMBERG)

TOKYO / KABUL / DHAKA / SEOUL / DUBAI / JAKARTA / JERUSALEM / BISHKEK / KUALA LUMPUR / MALE / YANGON / SINGPAORE / BANGKOK / HANOI - India says it can increase its production of COVID-19 vaccines to 500 million per month for export, as it fields interest from the UK, Belgium, and countries across the Middle East and Africa seeking access to cheaper inoculations.

The South Asian nation has the capacity to boost the production of AstraZeneca Plc’s vaccine being produced locally by the Serum Institute of India Ltd as well as an indigenously developed shot, on expectations that demand will rise by the end of this week, according to people with knowledge of the matter, who asked not to be identified as talks are still in progress. South Africa, Kenya and Nigeria are among African nations in talks for supplies, they said.

New Delhi on Wednesday began shipping out vaccines to six neighboring countries - Bhutan, Bangladesh, Nepal, Myanmar, Maldives and Seychelles - and is waiting for regulatory clearances from Sri Lanka, Afghanistan and Mauritius to send out the shots, the Indian foreign ministry said in a statement Tuesday. The ministry’s spokesman did not immediately respond to requests for comment.

More countries from Europe have shown an interest in procuring vaccines produced in India given the US$35 average cost of the Pfizer Inc-BioNTech SE and Moderna shots, according to officials. Serum, the world’s largest producer of vaccines by volume, can ship out the Astra vaccine priced between US$5-10 per dose.

The Pune-based company can currently push out 65 million COVID-19 shots a month but has the capability to increase that to 100 million doses, an official at Serum said, asking not be named because the information was private.

The number of active COVID-19 cases in India fell below the 200,000-mark on Wednesday, showing a steady decline amid the pandemic in the country, said the federal health ministry.

A total of 125 new COVID-19 cases have been registered in Afghanistan over the past 24 hours, bringing the total number of patients in the country to 54,403, a statement of Public Health Ministry said Wednesday.

The statement said that nine patients died over the period, bringing the number of COVID-19 related deaths to 2,363.

The leader of the Australian Capital Territory (ACT) has flagged mandatory coronavirus vaccines for high-risk settings.

Andrew Barr, the Chief Minister of the ACT, said that there was merit in requiring people entering high-risk settings such as aged care facilities to be inoculated against COVID-19.

"We've had some discussions at national cabinet level around certain occupations that it would be a prerequisite," he was quoted by The Canberra Times on Wednesday.

The official data showed that 15,410 samples were tested in the last 24 hours across Bangladesh.

According to the ministry, 9,755 more patients were discharged from hospitals, bringing the total number of recoveries to 763,703.

Meawhile, overseas Indonesians who tested positive for COVID-19 rose to 2,835, as four more new cases were registered, according to the Foreign Ministry on Wednesday.

All the new positive cases were reported in Germany.

The pandemic has so far claimed 56,973 lives in Iran, up by 87 in the past 24 hours, said Sima Sadat Lari, spokeswoman for Iranian Ministry of Health and Medical Education. A total of 1,131,883 people have recovered from the disease in Iran, while 4,272 remained in intensive care units.

Iraq on Tuesday approved the emergency use of China's Sinopharm and British AstraZeneca vaccines to contain the spread of COVID-19 pandemic. Meanwhile, Israel decided to extend nationwide lockdown for 10 days.

The Iraqi Ministry of Health said in a brief statement that the Iraqi National Board for Selection of Drugs (NBSD) approved the emergency use of the two vaccines.

Iraqi Ministry of Health spokesman Sayf al-Badr told Xinhua that the Chinese vaccine, developed by China National Pharmaceutical Group (Sinopharm), "conforms to the NBSD standards, and therefore the Iraqi state approved it for use inside Iraq."

Israel's cabinet decided on Tuesday to extend the weeks-long nationwide lockdown by 10 days until Jan. 31 to curb the spread of the COVID-19 pandemic.

The cabinet also decided that travellers entering the country will be required to present a negative coronavirus test taken within 72 hours before their flight. 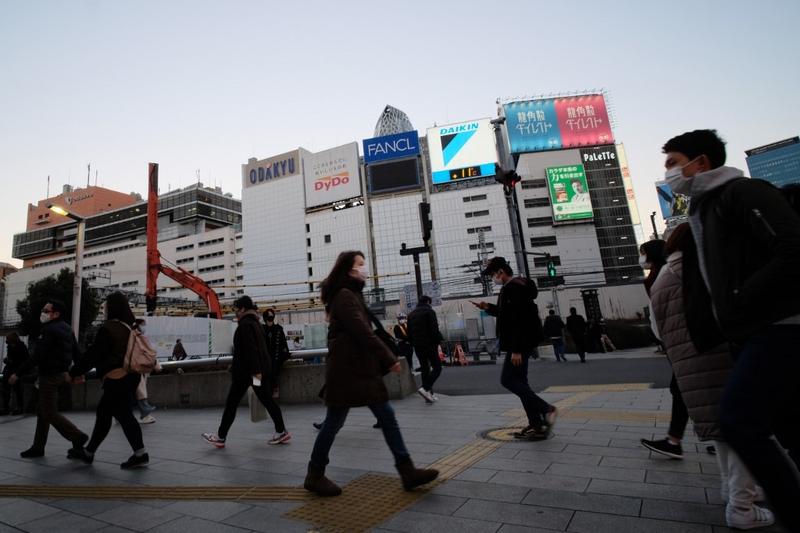 Pedestrians walk on a street in Tokyo's Shinjuku district on Jan 13, 2021 under a state of emergency over the COVID-19 coronavirus pandemic. (KAZUHIRO NOGI / AFP)

With an additional supply of vaccine doses for 12 million people, the Japanese government has made agreements with US pharmaceutical company Pfizer Inc to receive the drugmaker's COVID-19 vaccine doses enough for a total of 72 million people within this year, the health ministry said Wednesday.

The additional supply added to the country's agreement last year with the drugmaker to acquire doses for 60 million people, which accounted for roughly half the country's population of 126 million.

According to the Yomiuri Shimbun newspaper, the Japanese government hopes the majority of adults will be vaccinated by July, when the Olympic Games are slated to open.

The health ministry plans to start inoculating medical workers from the end of February, aiming to vaccinate about 50 million people in priority tiers by the end of April befroe starting giving doses to the general public in May.

Japanese Prime Minister Yoshihide Suga said Wednesday that Japan aims to start the vaccinations "as soon as possible," as the country is struggling to curb the spread of the virus amid a resurgence and the mounting pressure on the medical system.

The Tokyo metropolitan government reported 1,274 new cases of COVID-19 in the capital, marking the eighth successive day the daily tally has surpassed 1,000 cases and bringing the cumulative total to 89,188 infections.

The number of patients in Tokyo designated as being in a "serious condition" increased by five to a record 160 patients, the metropolitan government said.

Kuwait announced 578 new coronavirus infections, leading its tally of COVID-19 cases to 158,822, while its death toll rose by two to 950. The Kuwaiti Health Ministry also announced the recovery of 440 more patients, taking the total recoveries to 151,936.

According to data of the Republican Headquarters for Combating COVID-19, 124 more recoveries were registered over the past day, taking the count to 79,373.

The pandemic has so far claimed 1,392 lives in Kyrgyzstan, up by two in the past 24 hours, said the headquarters.

Lebanese Prime Minister Saad Hariri urged on Tuesday all the Lebanese to take serious precautionary measures against COVID-19 to protect their families, according to a statement by Hariri's office.

Health Ministry Director-General Noor Hisham Abdullah said in a press statement that five of the new cases are imported and 4,003 are local transmissions.

Eleven deaths have been reported, pushing the death toll to 630.

Around 100,000 doses of the AstraZeneca vaccine shipped by an Air India flight arrived in the Maldives. The shipment was a gift from the government of India.

President Ibrahim Solih, in an official statement, thanked the Indian government and Prime Minister Narendra Modi for the vaccine donation.

Solih said that the Maldives government has procured enough vaccines and will provide them free of charge to all citizens and residents in the Pacific island country.

The number of COVID-19 cases rose to 135,721 in Myanmar on Wednesday, according to a release from the Health and Sports Ministry.

A total of 478 new infection cases with 11 more deaths were confirmed in the country in the past 24 hours, the release said.

The death toll increased to 2,997 while 119,314 recovered patients were discharged from hospitals as of Wednesday.

New Zealand has reported six more cases of COVID-19 in managed isolation since the last media statement on Monday, according to the Ministry of Health on Wednesday.

The newly reported imported cases came from South Africa, Britain, Zimbabwe, the United States and Russia. There are no new cases in the community.

One of these cases is classified as historical and deemed not infectious, said a ministry statement.

The Qatari health ministry on Tuesday announced 225 new COVID-19 infections, raising the total number of confirmed cases in the Gulf state to 147,729. Qatar's overall recoveries increased by 203 to 144,218, while the fatalities remained at 248. 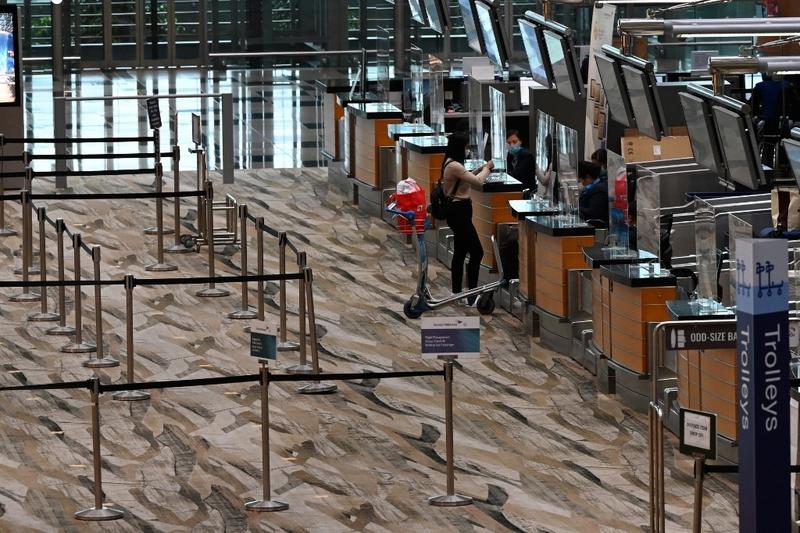 A passenger checks in at the departure hall counter of Changi International Airport terminal in Singapore on January 14, 2021. (ROSLAN RAHMAN / AFP）

Singapore Airlines Ltd. has set up pre-departure coronavirus tests for passengers through its booking platforms as part of efforts to revive travel demand destroyed by the pandemic.

People flying from Singapore as well as those traveling to the city-state from Jakarta and Medan in Indonesia can take tests at clinics and get results within 36 hours. If negative, they can be used for travel, according to a statement from Collinson Group, which is working with Singapore Airlines on the program.

The trial service began Tuesday and is due to run until mid-March. Collinson said it has performed more than 90,000 COVID-19 tests for travelers in partnership with airlines and several UK airports, including London Heathrow.

Moon made the remark during his tour to the COVID-19 vaccine production plant of SK Bioscience, a pharmaceutical unit of SK Group in Andong, North Gyeongsang province, about 270 km southeast of Seoul.

South Korea reported 404 more cases of COVID-19 as of midnight Tuesday compared to 24 hours ago, raising the total number of infections to 73,518.

The daily caseload was slightly up from 386 on the previous day, but it stayed below 500 for three straight days.

The daily number of infections hovered above 100 since Nov. 8 owing to small cluster infections in Seoul and its surrounding Gyeonggi province as well as imported cases.

Of the new cases, 135 were Seoul residents and 126 were people residing in Gyeonggi province.

Thirty-one were imported from overseas, lifting the combined figure to 6,011. 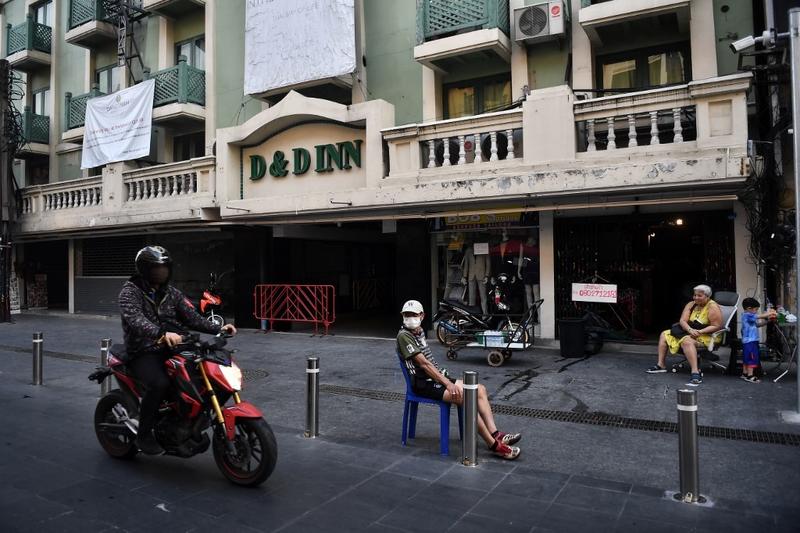 People sit in front of a shuttered hotel on Khao San Road, once a popular tourist destination before the COVID-19 pandemic, in Bangkok on Jan 19, 2021. (LILLIAN SUWANRUMPHA / AFP)

Thailand’s capital and some other provinces are considering relaxing restrictions on businesses and travel in coming weeks amid a decline in new coronavirus cases in certain regions.

Chiang Mai, the most-populous province in northern Thailand, lifted a ban on alcohol in restaurants from Wednesday, while Bangkok Metropolitan Authority is set to meet on Thursday to consider reopening businesses including massage parlors and gyms.

Thailand on Wednesday reported 59 cases of COVID-19 and one more death, according to the Center for the COVID-19 Situation Administration (CCSA).

The Department of Health (DOH) of the Philippines on Wednesday reported 64 new COVID-19 deaths, pushing the total death toll to 10,042.

The fatality rate in the Southeast Asian country now is at 1.98 percent, the DOH said in a daily bulletin.

A total of 765 more patients recovered, raising the total number of recoveries to 466,993.

"We have a determination to open schools as of Feb. 15 with the maximum capacity possible when we observed the current situation of society, families, parents, and children," Selcuk said in an interview with the CNN Turk broadcaster.

He noted that there has been a significant expectation at the point of opening school with face-to-face learning in public.

Turkey had previously switched to online education in high schools due to the growing COVID-19 cases.

Turkey on Tuesday started vaccinating the people residing or working in nursing homes against COVID-19. Turkish Health Minister Fahrettin Koca said on Monday the vaccination campaign, which kicked off on Jan 14, would also cover people in disabled care centers and care homes, as well as citizens aged 90 and above.

Vietnam recorded four new cases of COVID-19 on Wednesday, bringing its total tally to 1,544 with 35 deaths, according to its Ministry of Health.

All the new cases are Vietnamese citizens who recently entered the country from abroad and were quarantined upon arrival.