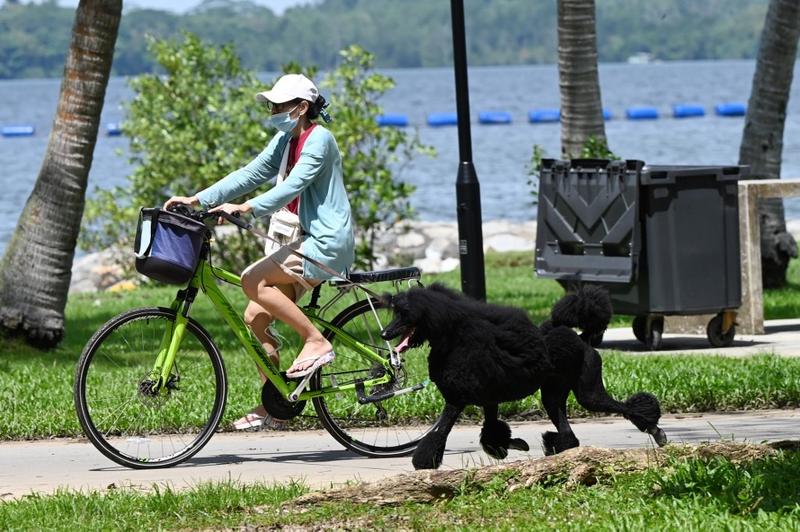 A woman cycles while her pet dog runs alongside her at a park in Singapore on Jan 15, 2021. (ROSLAN RAHMAN / AFP)

KUALA LUMPUR / JAKARTA /  DUBAI - Singaporeans should toss their yusheng raw fish dish into the air quietly in the traditional lohei celebration as they usher in the Year of the Ox, according to measures the government announced to keep a lid on the virus pandemic.

“Diners should also avoid raising their voices, at all times” and wear masks, the ministry of health said in a statement Friday. “The lohei should be done without any verbalization of the usual auspicious phrases.”

The government appealed for restraint during the Lunar New Year period, when families typically do multiple rounds of home visits. People should limit themselves to two household visits a day, and each household won’t be allowed to receive more than eight “distinct” visitors a day, starting from Jan 26. The government will also postpone the start of sports competitions among schools.

Sri Lankan authorities on Friday granted approval for the emergency use of the Oxford-AstraZeneca vaccine for COVID-19, Minister for Pharmaceutical Production and Regulation Channa Jayasumana told local reporters.

This the first time Sri Lanka has approved a vaccine for emergency use in the island country. 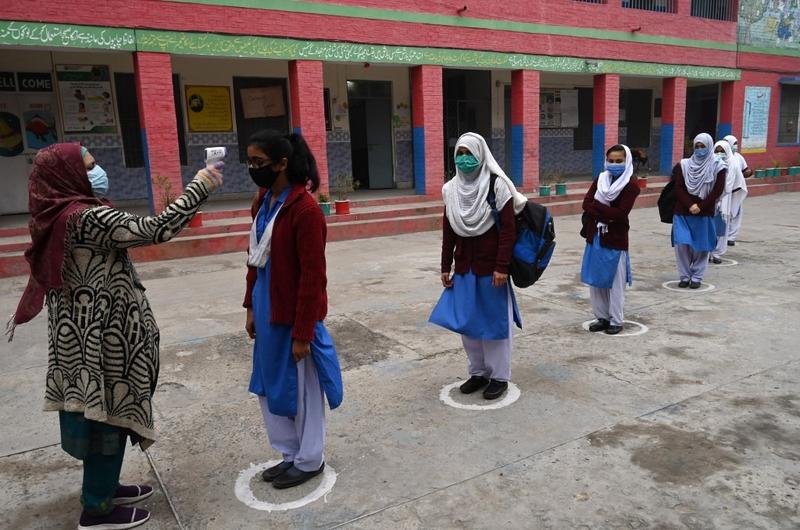 A teacher (left) checks the body temperature of students wearing facemasks upon their arrival at a school in Lahore on Jan 18, 2021, as the govt reopened educational institutes from grade 9th to 12th after remaining closed as a preventive measure against the COVID-19 pandemic. (ARIF ALI / AFP）

CanSino Biologics Inc. has offered 20 million shots to Pakistan as it gets ready to release efficacy results from phase III trials there, according to its local partner.

The Chinese maker of the single-shot vaccine will give Pakistan preferential access and pricing, said Hasan Abbas Zaheer, technical adviser at AJM Pharma Pvt., the local partner. It has already applied for approval from Pakistan’s drug regulator. The company also plans to cut the cost of procuring the vaccines by 25% by filling the vials locally.

Pakistani Foreign Minister Shah Mahmood Qureshi called for coordinated international actions, learning from each other's experiences, and pooling resources to respond to the adverse influence of the COVID-19 pandemic.

Speaking at the 17th Asia Cooperation Dialogue (ACD) Ministerial Meeting on Thursday, held in a virtual format, Qureshi said that his country is open to share its experience in effectively combating the pandemic, according to a statement from the Foreign Ministry of Pakistan.

Qureshi also emphasized the need for COVID-19 vaccine to become easily and equitably accessible to all, the statement said.

The Indian government said on Friday that over 1 million healthcare workers have been vaccinated against COVID-19.

As of 7:00 a.m. local time Friday, around 1,043,534 people have received the vaccination under the countrywide COVID-19 vaccination exercise, the federal health ministry said, adding that during the last 24 hours, 237,050 people were vaccinated in 4,049 sessions.

According to the official data, the death toll mounted to 153,032 as 163 COVID-19 patients died since Thursday morning.

There are still 188,688 active cases in the country, while 10,283,708 people have been discharged so far from hospitals after medical treatment. It was the first time on Wednesday, in nearly seven months, when the number of the active COVID-19 cases in the country fell below the 200,000-mark.

According to the ministry, 8,357 more people were discharged from hospitals, bringing the total number of recovered patients to 781,147.

Indonesia recorded its highest COVID-19 toll since the outbreak began as movement restrictions were extended for two more weeks in Java and Bali.

The authorities confirmed 346 deaths in the 24 hours through midday Thursday, taking the total to more than 27,000.

A total of 1,144,549 people have recovered from the disease in Iran, while 4,168 patients remained in intensive care units.

Israel will widen its vaccination drive to high school students from the age of 16, beginning next week, the Health Ministry said late Thursday. The decision is intended to help facilitate matriculation examinations. Until now, the government has given preference to older age groups, gradually reducing the minimum age to 40. More than 27 percent of the population has received a first dose of the Pfizer-BioNTech SE vaccine, and close to 10 percent, a second dose.

Israel's Ministry of Health reported 7,575 new COVID-19 cases on Thursday, bringing the total cases in the country to 582,293.

The number of people vaccinated against the COVID-19 in Israel has surpassed 2.4 million, or 25.8 percent of its population, the ministry said.

Japan’s vaccine programme chief on Friday walked back on a goal to secure enough targeted supplies of COVID-19 vaccines by June, one month before the planned start of the Tokyo Olympics.

Taro Kono, the newly installed head of Japan’s inoculation push, told reporters that “old information” was behind a spokesman’s comments on Thursday that the government expects to have enough vaccines for its targeted population by mid-year.

Kuwait reported 570 new COVID-19 cases, raising the tally of infections to 159,834, while the death toll remained at 951. The Kuwaiti Health Ministry also announced the recovery of 406 more patients, taking the total recoveries to 152,826.

In Lebanon, the COVID-19 ministerial committee approved on Thursday the extension of the 25-day lockdown, which started on Jan. 7, until Feb. 8, in hope to curb the spread of the pandemic.

Caretaker Prime Minister Hassan Diab urged the health minister to draft a strategy for vaccination and the measures that must be adopted after lockdown to prevent resurgence of infections.

Lebanon's total COVID-19 infections soared by 4,594 to 269,241, while its death toll climbed to 2,151 with the addition of 67 new deaths, the highest daily surge since the pandemic outbreak last year. 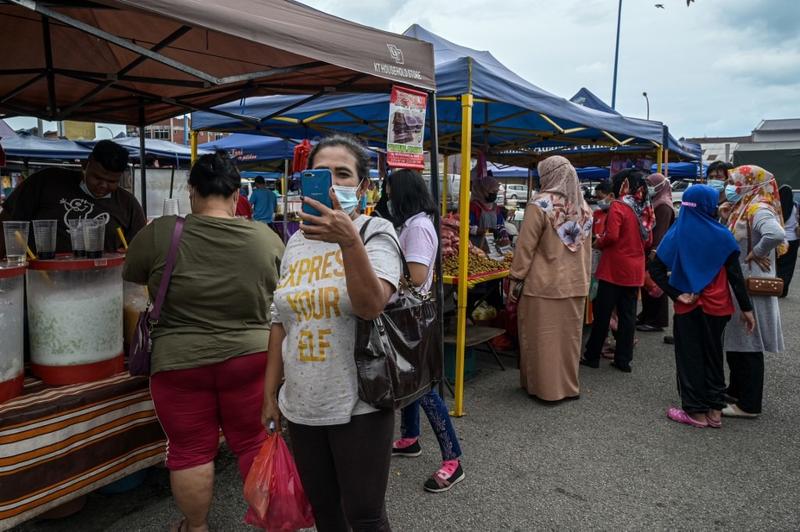 People visit a market in Karak, in Malaysia’s Pahang state, on January 20, 2021, ahead of the final night of the market before closing due to restrictions to halt the spread of the COVID-19 coronavirus. (MOHD RASFAN / AFP)

Malaysia extended movement restrictions in six states and federal territories by more than a week amid surging coronavirus cases. The Movement Control Order -- the nation’s strictest form of lockdown -- was due to end Jan 26 but will continue until Feb 4.

After the restrictions were extended, Resorts World Genting, the hilltop casino, said it will close for two weeks.

Health Ministry Director-General Noor Hisham Abdullah said in a press statement that six of the new cases are imported and 3,625 are local transmissions.

Another 18 deaths have been reported, pushing the death toll to 660.

Some 2,554 patients have been released after recovery, bringing the total cured and discharged to 132,706, or 75.3 percent of all cases.

Mongolia reported eight new COVID-19 cases in the past 24 hours, bringing its national tally to 1,592, said the country's National Center for Communicable Diseases (NCCD) on Friday.

"A total of 15,546 tests for COVID-19 were conducted across Mongolia yesterday and eight of them were positive," said Amarjargal Ambaselmaa, head of the NCCD's Surveillance Department, at a press conference.

Seven of the latest confirmed cases were found in people who had close contact with previously confirmed cases in the country's capital city Ulan Bator and another one was a doctor of the NCCD, said Ambaselmaa.

Myanmar has ordered 30 million doses from Serum Institute of India -- which manufactures a vaccine developed by AstraZeneca and Oxford University -- and is in talks with Chinese manufacturers. It expects to receive jabs for 20 percent of its 55 million population from the global Covax facility.

Earlier this week, the International Monetary Fund’s resident representative cautioned Myanmar not to ease virus restrictions too quickly even with local cases falling.

New Zealand reported nine cases of COVID-19 in managed isolation since the last media statement on Wednesday. There are no new cases in the community.

The newly imported cases came from the United States, Britain, United Arab Emirates, India and Kazakhstan, and have remained in managed isolation facilities in Auckland and Christchurch, according to the Ministry of Health on Friday.

In Oman, the health ministry reported 169 new COVID-19 infections, raising the total confirmed cases in the country to 132,486.

Its total recoveries surged by 128 to 144,478, while the death toll remained unchanged at 248 for the fourth day running, according to a ministry statement.

Saudi Arabia recorded 212 new infections and four more deaths, raising its total COVID-19 cases to 365,775 and its death toll to 6,342. The total number of recoveries in the kingdom rose to 357,337 with the addition of 160 new recoveries.

South Korea reported 346 more cases of COVID-19 as of midnight Thursday compared to 24 hours ago, raising the total number of infections to 74,262.

The virus spread showed signs of moderating this year, but the daily number of infections hovered above 100 since Nov. 8 owing to small cluster infections in Seoul and its surrounding Gyeonggi province as well as imported cases.

Of the new cases, 113 were Seoul residents and 102 were people residing in Gyeonggi province.

Thirty-two were imported from overseas, lifting the combined figure to 6,062.

Thailand confirmed 309 coronavirus cases on Friday, mostly via active testing, according to Center for the COVID-19 Situation Administration (CCSA).

Of the total new cases, 297 were domestic ones while 12 others were those who had returned from abroad, CCSA spokesman Taweesin Visanuyothin said.

The Philippines is relaxing movement restrictions on minors in areas under the lowest quarantine level, a move supported by economic managers despite warnings from the Health Department. The lowest age allowed to leave homes was changed to 10 from 15 in places under modified general community quarantine, presidential spokesman Harry Roque said.

Local governments in areas under the second-lowest quarantine level, like those in the capital region which accounts for nearly half of coronavirus cases, are also “enjoined to adopt the same relaxation of age restrictions.”

The Department of Health (DOH) of the Philippines reported on Friday 2,178 new COVID-19 cases, bringing the total number of cases in the Southeast Asian country to 509,887.

The death toll climbed to 10,136 after 20 more patients died from the viral disease, the DOH said. Meanwhile, 250 more patients recovered, raising the total number of recoveries to 467,720.

The rate of pneumonia in Turkish COVID-19 patients stands at 5.1 percent, and the number of seriously ill patients was 2,704 in the country, said the ministry.

On the government-to-government basis, a total of 1.5 million doses of the Covishield vaccine, manufactured by Serum Institute of India (SII), arrived in the country and were handed over to the Medical Research Department under Myanmar's Ministry of Health and Sports.

Dr. Tun Myint, deputy director-general of Yangon Region's Public Health Department, said the vaccines, which will be enough for 750,000 people, will be transported to the central cool chain room and distributed to regions and states starting Saturday morning.

The priority groups to get inoculated include frontline health workers, volunteers, key members of the union government and members of the Union Parliament as well as high-risk groups, the elderly and people with underlying diseases, and people residing in places with high density of population, State Counsellor Aung San Suu Kyi told the public on Thursday.