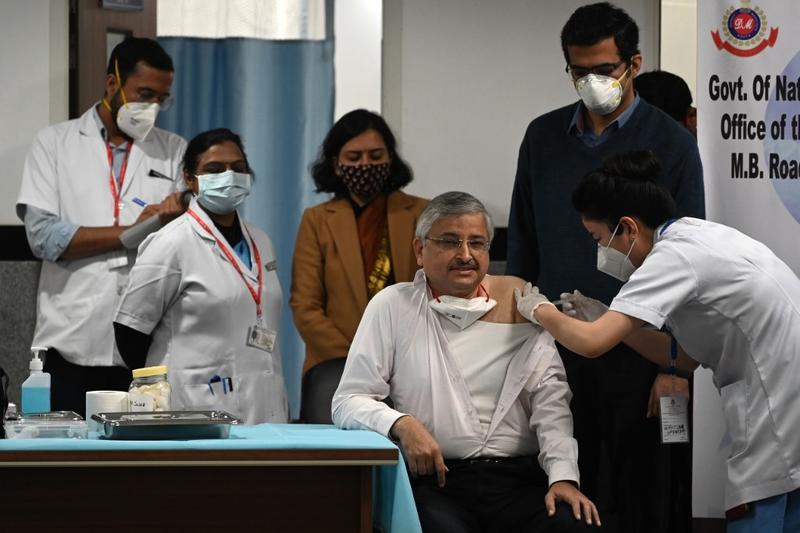 A medical worker inoculates a colleague with a COVID-19 vaccine at the All India Institute of Medical Science (AIIMS) in New Delhi, India, on Jan 16, 2021. (SAJJAD HUSSAIN / AFP)

Modi, who addressed healthcare workers through video conferencing, will not immediately take the vaccine himself as India is initially prioritizing nurses, doctors and others on the frontline.

“These vaccines will help India win the battle against the virus,” Modi said, adding that Indians should get the shots and not pay heed to any anti-vaccine propaganda.

Modi said a total of 30 million people would be given the vaccine in the first phase of vaccination, and nearly 300 million would be reached out by the end of the second phase.

TV footage showed people applauding as vaccines were being taken inside the vaccination centers and administered to the recipients. 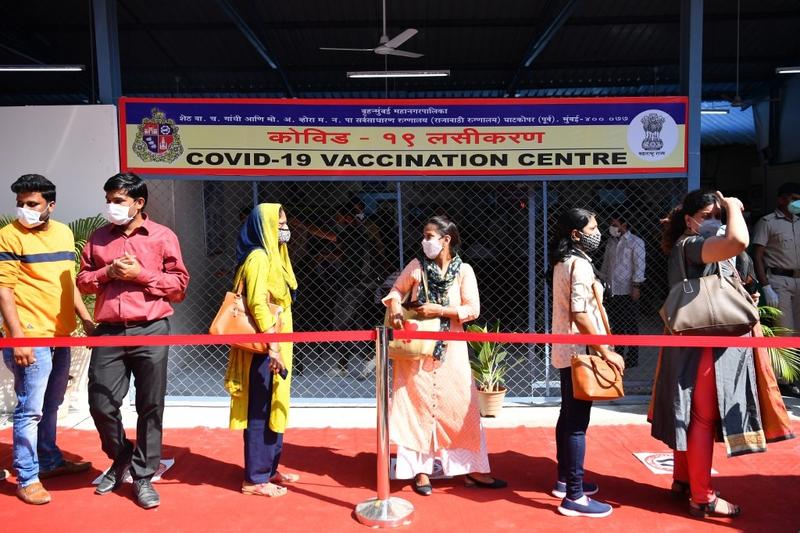 The start of the campaign came on a day the country reported 15,158 new cases, bringing the cumulative caseload to 10,542,841, according to the latest data from the federal health ministry.

According to the data, the death toll rose to 152,093 after 175 additional fatalities were logged. There were still 211,033 active cases in the country.

As many as 295 new cases and 10 deaths were registered in the national capital Delhi through Friday.

On the first day of inoculations, around 100 people will be voluntarily vaccinated in each of the 3,006 centers in the country, the government said this week, calling it the start of the biggest such campaign in the world.

“This will be the world’s largest vaccination programme covering the entire length and breadth of the country,” Modi’s office said in a statement this week.

First to get the vaccine will be health and other frontline workers, such as those in sanitation and security, followed by people older than 50 or deemed high-risk because of pre-existing medical conditions.

Two coronavirus infections were reported on Saturday on a flight to the Australian Open, forcing two weeks of strict hotel quarantine for all the tennis players and entourage on board.

An aircrew member and an Australian Open participant, though not a player, traveling from Los Angeles to the tennis tournament recorded positive test results for COVID-19, authorities in the host city Melbourne said.

Emirates is suspending flights to Australia’s three largest cities due to “operational reasons,” the airline announced. The last flights to Melbourne, Sydney and Brisbane will be on Jan 20

The two people have been transferred to a specialist health hotel, and 66 other passengers will now undertake a 14-day hotel quarantine, Victoria’s state government said in a statement.

A total of 24 tennis players are among those passengers who are now in hotel quarantine, Tennis Australia said.

The inbound infections came as Australia recorded a single locally acquired case. The case, in western Sydney, is thought to be linked a known cluster in New South Wales, the most populous state, health officials said.

Australia, which logged 20 infections hotel quarantine overnight, has been one of the world’s most successful nations in managing the coronavirus spread, with about 28,700 infections and 909 deaths.

In another development, Emirates is suspending flights to Australia’s three largest cities due to “operational reasons,” the airline announced. The last flights to Melbourne, Sydney and Brisbane will be on Jan 20 and customers for those cities will not be accepted for travel at their point of origin. Emirates did not say when the flights would resume.

South Korea will extend current social distancing guidelines in the densely populated capital and surrounding areas for another two weeks as they have significantly curtailed infections, Health Minister Kwon Deok-cheol said on Saturday.

The alert level for the greater Seoul area will be maintained at 2.5, the second highest, while the rest of the country will be kept at 2, Kwon said. Current measures were due to expire Jan 17.

While continuing the restrictions, which include a ban on private gatherings of more than four people and shutting down most establishments and shops at 9 pm, some venues that have been forced to close, such as cafes, gyms, and karaoke bars will resume operation if they apply strict prevention measures, Kwon said.

South Korea will impose a “special quarantine period” for two weeks from Feb 2 in the run-up to the Lunar New Year holidays to prevent another wave of infections. The government urged people to refrain from visiting families and homes during the vacation.

The Korea Center for Disease Control and Prevention (KCDC) reported 580 new cases as of midnight on Friday, bringing total infections to 71,820, with 1,236 deaths. 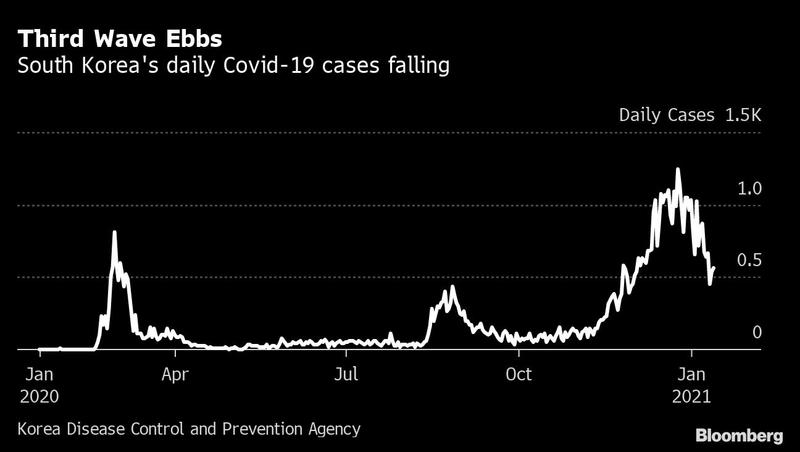 Also on Saturday, the US Forces in Korea (USFK) said it has imposed a shelter-in-place order on two of its largest bases - US Army Garrison Yongsan and Camp Humphreys - until Tuesday after a cluster of infections.

Camp Humphreys in Pyeongtaek, south of Seoul, is the largest US military base overseas, housing the USFK headquarters and thousands of troops, civilian workers, and their family members.

It was not immediately clear how many cases have been reported at the two bases, but USFK said six people tested positive on Friday.

Of the new cases 209 were local infections and 21 were imported.

Meanwhile, one more death was also reported, lifting the death toll to 70.

The Department of Health (DOH) of the Philippines on Saturday reported 2,058 newly confirmed COVID-19 cases, bringing the total number of infections in the country to 498,691.

The death toll climbed to 9,884 as eight more patients have died, the DOH said.

It added that another 406 patients have recovered, raising the total number of recoveries to 460,133.

Tokyo reported 1,809 infections of the new coronavirus on Saturday, its government said.

Azerbaijan will allow cafes and restaurants to open their doors to customers from Feb 1 but other coronavirus lockdown restrictions will be extended until April, the government said on Saturday.

Measures to stem the spread of the virus were introduced in late March and have been extended several times, with borders closed as the number of new cases keeps rising.

Shopping malls will stay closed and the metro service in the capital Baku will remain suspended.

As of Saturday, the country of about 10 million people in the South Caucasus had registered 226,549 confirmed cases and 2,983 deaths.

The total number of COVID-19 cases in Mongolia has increased to 1,512, the country's National Center for Communicable Diseases (NCCD) said Saturday.

A total of 21 new locally transmitted cases were reported in the past 24 hours, the center said in a statement.

The latest confirmed cases were detected in the capital Ulan Bator, it added.

The country has so far recorded two COVID-19-related deaths and 909 recoveries.

The death toll rose by one to 947, the ministry said.

It also reported that 268 more patients have recovered,  taking the total recoveries to 150,329.

More than 600,000 health workers in Turkey have received their first doses of the COVID-19 vaccine developed by China's Sinovac during the first two days of the country's vaccination program, data from the Turkish Health Ministry showed on Friday.

Turkey reported on Friday 8,314 new COVID-19 cases, including 921 symptomatic patients, bringing the tally to 2,373,115, according to the ministry.

The Iraqi Ministry of Health reported on Friday 805 new COVID-19 cases, bringing the cumulative caseload to 606,991.

The ministry also said that 10 more deaths were recorded, raising the death toll to 12,932.

Meanwhile, Sayf al-Badr, spokesman for the ministry, warned in a press release of rumors in some local media reports about the spread of a new strain of the virus in some Iraqi provinces.

"We deny such reports and any news not issued by the relevant authorities about the coronavirus pandemic," al-Badr said. "If there are any positive or negative developments, the Ministry of Health and authorized persons are the only parties that have the right to give information." 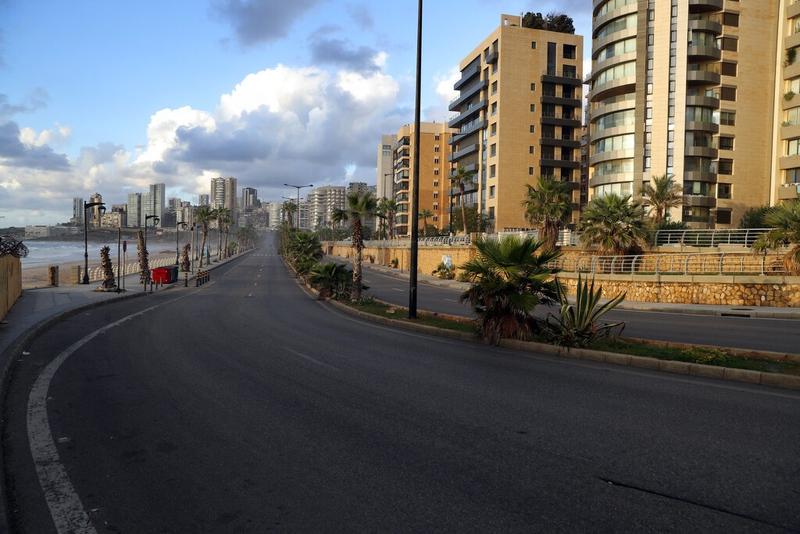 This Jan 15, 2021, photo shows an empty street in Beirut, Lebanon, amid a locdown imposed to curb the spread of the coronavirus. (BILAL HUSSEIN / AP)

Lebanon registered on Friday 6,154 new COVID-19 cases, the highest daily increase in the country, raising the tally to 243,286, the Health Ministry reported.

Earlier on Friday, Lebanon passed a law that will allow the emergency use of COVID-19 vaccines.

House Speaker Nabih Berri said the new law allows medical companies and the private sector to import the vaccines for the fight against COVID-19.

Lebanon will buy 2 million doses of the Pfizer vaccine, with the first shipment expected to arrive by mid-February.

The number of people vaccinated against COVID-19 in Israel has exceeded 2 million, the Ministry of Health said on Friday.

Israel has vaccinated more than 21.5 percent of its population of about 9.3 million in less than a month since the vaccination campaign began on Dec 20.

The death toll reached 3,910 after another 50 fatalities were logged, while the number of patients in serious condition increased from 1,117 to 1,135, out of 1,818 who are hospitalized.

It is the highest number of patients in serious condition since the start of the pandemic in the country.

Meanwhile, the number of active cases among Israeli soldiers reached 1,594, the Israeli Defense Forces said, the highest morbidity figure in the Israeli army since the outbreak.

Singapore's Ministry of Health (MOH) reported 30 new COVID-19 cases on Friday, bringing the total number of confirmed cases in the country to 59,059.

Of the new cases, 29 were imported while the remaining one was a case of community transmission.

The death toll remained at 29.

A total of 174 more patients have recovered, bringing the overall recoveries to 143,435, death toll remained at 246, according to a ministry statement quoted by QNA.

Myanmar's COVID-19 death toll rose to 2,926 after 14 additional deaths were reported, according to a release from the Health and Sports Ministry on Friday.

Another 513 new infections were registered in the past 24 hours, bringing the tally to 133,378, according to the release.

Bangladesh has again extended the closure of educational institutions, except madrasas (Islamic religious schools) to prevent further spread of the COVID-19 in the current cold weather.

The Ministry of Education said in a statement Friday that all educational institutions will remain closed till Jan 30, instead of Jan 16.