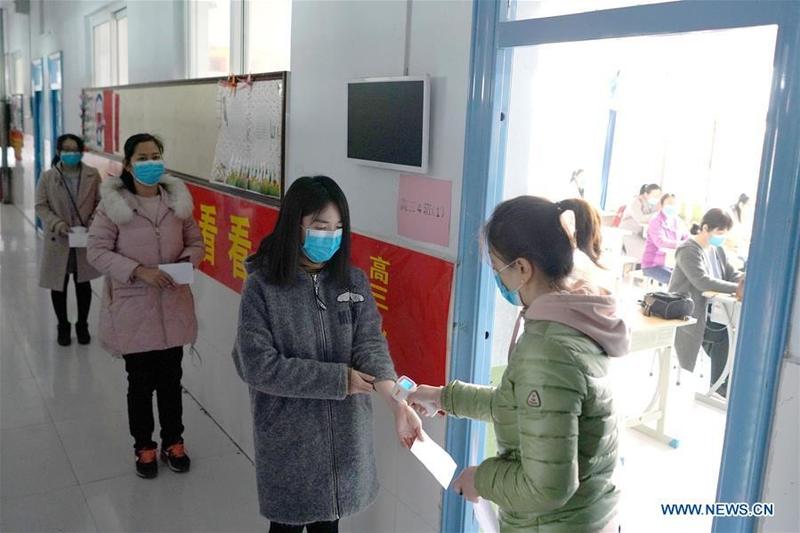 Teachers acting as students stand in line to have their body temperature checked before entering a classroom during a drill conducted in preparation of class resumption. At a school in Xingtai city, north China's Hebei province, April 2, 2020. (MOU YU / XINHUA)

WUHAN/BEIJING - Wuhan, the epicenter of the novel coronavirus outbreak in China, on Friday asked its residents to stay at home and avoid nonessential outings as the city guards against a rebound in the outbreak.

The government of Wuhan, capital of Hubei province, said in a notice that the city's residential communities will continue closed-off management, and residents passing through communities' entries must have their temperatures checked and wear a mask.

In the notice, the government warned against slackening vigilance amid the increased flow of people and influx of non-locals.

Wuhan, which has been virtually sealed off since Jan 23 to contain the epidemic, is expected to lift outbound travel restrictions on April 8. The city's public transportation has partly resumed service, and there are visibly more pedestrians and vehicles on the roads.

Preventing a rebound in the outbreak, however, remained "an arduous task," according to the notice, citing the emergence of asymptomatic patients, patients who test positive again after being discharged from hospitals and new cases in people arriving from abroad.

The government demanded enhanced efforts to track down and timely quarantine and treat COVID-19 cases and their close contacts, according to the notice.

Hubei reported only one new confirmed case of COVID-19 in the past week, but on Thursday, 51 new asymptomatic patients were registered there, up from 37 on Wednesday.

The province saw four new deaths, which were all reported in Wuhan, on Thursday.

The province also confirmed 51 asymptomatic COVID-19 patients Thursday, bringing the total to 742, all of whom had been put under medical observation by the end of Thursday.

The National Health Commission said it received reports of 31 new confirmed cases on the Chinese mainland on Thursday, of which 29 were imported

A total of 141 COVID-19 patients were discharged from hospital after recovery Thursday. Among the 987 patients being treated in hospital, 239 were still in severe condition and 110 others in critical condition.

The commission demanded continued prevention efforts in communities, workplaces and households to guard against an epidemic rebound as the country faces rising risks of imported cases.

"With a growing number of imported cases, China is still facing risks of sporadic locally-transmitted cases and even local outbreaks of COVID-19," said Mi Feng, spokesperson for the commission, at a press conference.

Mi's remarks came after the commission said it received reports of 31 new confirmed cases on the Chinese mainland on Thursday, of which 29 were imported.

Two new domestic cases were reported in the provinces of Liaoning and Guangdong, the commission said.

Also on Thursday, four deaths were reported on the mainland, as well as 12 new suspected cases, all of them imported, according to the commission.

On Thursday, 163 people were discharged from hospitals after recovery, while the number of severe cases decreased by 50 to 379.

As of Thursday, the mainland had reported a total of 870 imported cases. Of the imported cases, 160 had been discharged from hospitals after recovery, and 710 were being treated with 19 in severe conditions, said the commission.

The overall confirmed cases on the mainland had reached 81,620 by Thursday, including 1,727 patients who were still being treated, 76,571 patients who had been discharged after recovery, and 3,322 people who died of the disease.

The commission said that 135 people were still suspected of being infected with the virus, all of whom were from abroad.

60 new asymptomatic COVID-19 cases were reported on the mainland Thursday, including seven imported ones

Also on Thursday, 60 new asymptomatic COVID-19 cases were reported on the mainland, including seven imported ones. Seven asymptomatic cases, all imported ones, were re-categorized as confirmed infections, and 101 were discharged from medical observation including five imported cases, according to the commission.

The commission said 1,027 asymptomatic cases were still under medical observation, including 221 from abroad.

A total of 154 patients in Hong Kong, 10 in Macao and 50 in Taiwan had been discharged from hospitals after recovery.