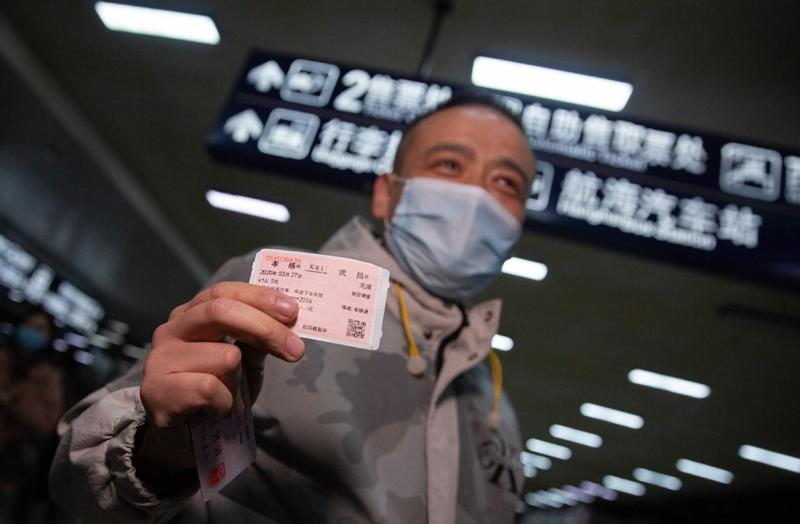 After being apart for more than two months, Xia Fan finally saw her boyfriend at 2 am on Saturday at Wuchang Railway Station in Wuhan－the city that had been in a lockdown since Jan 23 due to the novel coronavirus outbreak.

"He told me not to come as it's too early in the morning, but I spent the last two months waiting for his return from Shiyan. I could not bear one more second," said the 25-year-old nurse from Zhongnan Hospital of Wuhan University.

"The moment I saw him, I felt so reassured. With more people and energy injected into the city, I believe Wuhan will recover soon," she said.

Over 260 inbound trains broke the two-month silence of the 17 train stations in Wuhan on Saturday－the first day the country's major rail transportation hub reopened to passengers after the lockdown, bringing more than 60,000 people back to the city, according to China Railway Wuhan Group

Over 260 inbound trains broke the two-month silence of the 17 train stations in Wuhan on Saturday－the first day the country's major rail transportation hub reopened to passengers after the lockdown, bringing more than 60,000 people back to the city, according to China Railway Wuhan Group.

Though the number of trains arriving in Wuhan stands at only one fourth of the usual number, the reopening of the stations allows people to come back through the country's vast railway network, the company said, adding that there will be an increasing number of inbound trains to take back more people.

From April 8, the stations in the city will begin their outbound train service as well, it added.

Wuhan is also going to restart civil aviation services as the virus outbreak continues to subdue.

From April 8, Wuhan Tianhe International Airport will resume all passenger and cargo flights on domestic air routes except to and from Beijing, while other airports across the province have already operated flights since Sunday, according to the Civil Aviation Administration of China.

Data from Qunar, an online travel service provider, showed that there are more than 30 domestic routes linking the cities of Yichang, Xiangyang, Enshi, and Shiyan in Hubei, and almost all of the tickets for flights on Sunday were sold out.

There are not many remaining tickets for the flights departing from Wuhan on April 8 either, which are all full-price economy class, it added.

With Wuhan lifting its travel restrictions in an orderly manner, its cargo and logistics transportation is also resuming. On Saturday, a China-Europe freight train carrying 50 cargo containers left Wujiashan Railway Container Station in Wuhan en route to Central Europe for the first time since the outbreak began.

READ MORE: Delivery getting back to normal in Wuhan

Nearly 90 percent of all goods aboard were produced locally in Wuhan, including 166.4 metric tons of medical supplies such as medical fabrics, as well as auto parts, electronics and telecommunication cables, according to China State Railway Group.

The train is expected to arrive in the German city of Duisburg in about 15 days. The goods will then be transported to Germany, France, Hungary, the Czech Republic and Poland for pandemic control and construction projects.

The normalization of the China-Europe freight service serves as evidence that the city's logistics and production is gradually recovering, and will become a strong backstop for commerce and trade, said Tu Shanfeng, board chairman of Wuhan Port and Shipping Development Group.

He added that more freight trains ferrying goods between the two regions will be in place in the coming days.