By Cang Wei in Nanjing and Shi Baoyin in Zhengzhou 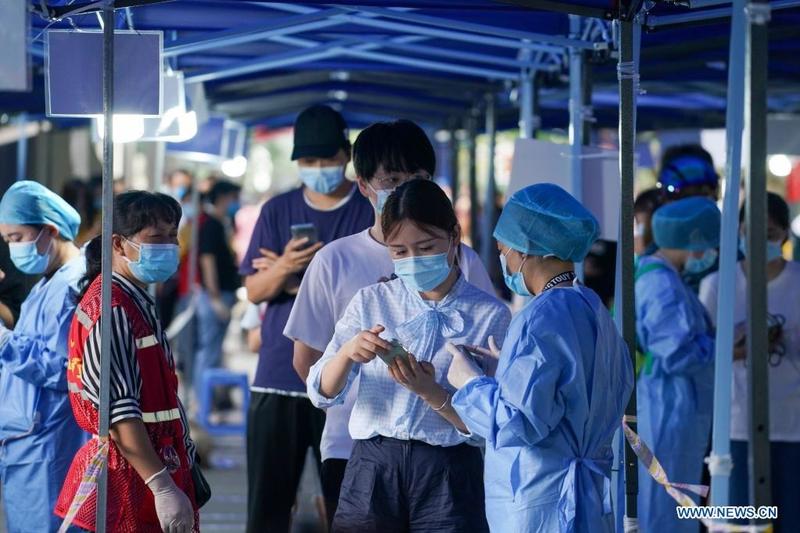 A group of Chinese cities have asked their residents to avoid traveling as more case numbers of COVID-19 have been reported across the country.

Of the confirmed case, 30 were in Jiangsu, 12 in Henan, four in Hunan, three in Yunnan, and one each in Fujian, Shandong, Hubei provinces and the Ningxia Hui autonomous region, the commission said.

In Yangzhou, the city has taken strict measures including closing all bus, taxi and ride-hailing vehicle services, and suspending passenger flights at Yangzhou-Taizhou International Airport

"Anyone experiencing a psychological crisis can contact the hotline center for help," he said.

Yangzhou has taken strict measures to contain the virus and launched a second round of nucleic acid testing in its downtown areas on Sunday.

The city has closed all bus, taxi and ride-hailing vehicle services as well as long-haul bus services out of the city since Saturday. Passenger flights at Yangzhou-Taizhou International Airport have also been suspended.

Zhengzhou, capital of Henan province, removed directors of the city's health commission and the No 6 People's Hospital from their posts on Saturday for failing to contain the virus. The city, which was recently hit by torrential rains, reported on Saturday 12 locally transmitted confirmed COVID-19 cases and 20 asymptomatic cases.

"The virus is highly contagious and has spread quickly in Zhengzhou," said Zhang Ruoshi, deputy director of the Henan Provincial Health Commission. "Most of the locally transmitted cases in Henan are related to No 6 People's Hospital, which was the city's designated hospital for treating imported COVID-19 patients."

The city of more than 12.6 million is setting up 4,168 sample collection sites to complete citywide nucleic acid testing in three days, starting Sunday.

"Health experts confirmed that the new cases was mainly caused by the Delta variant," said Zhao Dongyang, deputy director of the Henan Center for Disease Control and Prevention.

In Hunan province, four locally transmitted confirmed cases were reported on Saturday－one in Changsha, two in Zhangjiajie and one in the Xiangxi Tujia and Miao autonomous prefecture. Zhangjiajie has barred all residents from leaving their communities in the city.

Flights, trains and buses from places outside Beijing where infections were found, to the Chinese capital have been suspended, the city's top epidemic prevention group said

Also on Sunday, Beijing reported two new locally transmitted confirmed COVID-19 cases and one asymptomatic case, both related to the outbreak in Nanjing. The three cases were in Fangshan district. The residential community of the confirmed cases and surrounding communities have been closed to the outside, isolating about 9,500 people.

The people infected in Beijing and people from their communities and workplaces should not go outside the capital. Additionally, people from places outside Beijing where infections were found should not go to the capital. Flights, trains and buses from those places to Beijing have been suspended, the city's top epidemic prevention group made known in a meeting on Sunday.

Top Chinese epidemiologist Zhong Nanshan said at a summit in Guangzhou, Guangdong province, on Saturday that he was not too worried about Nanjing's recent outbreak, since the city has taken effective measures to contain the virus.

He also suggested that the concept of "close contacts" should be changed in light of the Delta variant.

"We used to consider as contacts the family members, colleagues and people who had a meal or meeting with infected people up to two days before they showed symptoms. But with the emergence of the Delta variant, people who are in the same space, same workplace and same building as infected people four days before they show symptoms should be considered as close contacts," Zhong said.

Zhu Youfang in Changsha and Du Juan in Beijing contributed to this story.