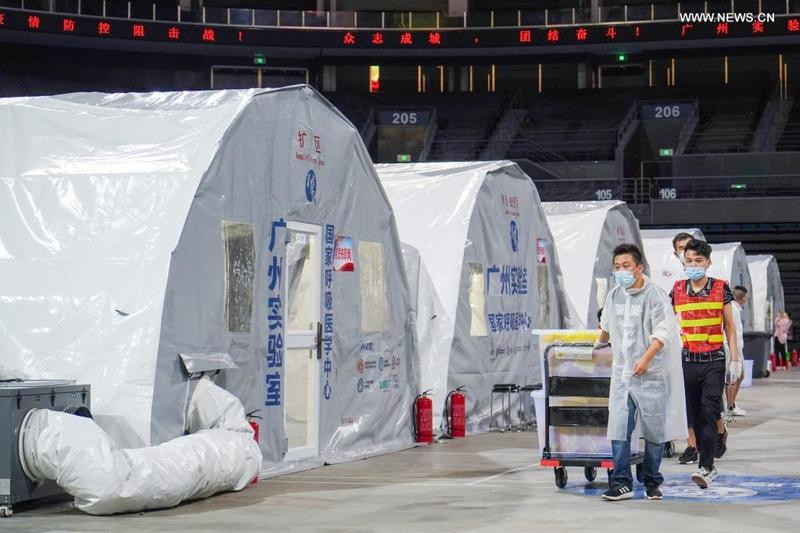 Jiangsu Governor Wu Zhenglong said on Tuesday that Nanjing, the provincial capital, will comprehensively strengthen control measures to contain a recent COVID-19 outbreak, in which the highly contagious delta variant has been detected.

Wu, on a visit to the Nanjing pandemic prevention and control headquarters, said the city's COVID-19 situation is "very severe and complex" as the virus is spreading quickly.

As of Tuesday, 106 locally transmitted cases had been reported in Nanjing, including 31 new cases on Tuesday, after staff at Lukou International Airport tested positive for the virus a week ago.

People's lives will always be a top priority. The resources of Nanjing and the whole province will be mobilized to contain the virus.

Locally transmitted cases have been reported in eight of the city's 11 districts.

By Tuesday, Suqian in Jiangsu province, Zhuhai and Zhongshan in Guangdong province, Mianyang and Luzhou in Sichuan province, Shenyang and Dalian in Liaoning province, and Ma'anshan and Wuhu in Anhui province, had all reported locally transmitted cases involving people who had been to Nanjing.

"People's lives will always be a top priority," Wu said. "The resources of Nanjing and the whole province will be mobilized to contain the virus."

Ding Jie, deputy director of the Nanjing center for disease control and prevention, said at a news conference on Tuesday the delta variant is more easily transmissible, can cause severe illness and can lessen the effectiveness of treatment.

"Stricter, faster and more comprehensive measures must be taken to contain the virus," she said, adding that the early infections happened among airport workers who clean aircraft cabins.

Closed-loop management will be imposed for airport staff members. Other workers, such as salespeople and servers at the airport's restaurants, will be quarantined.

The operations of offline after-school training institutions will be suspended, along with those of karaoke lounges, cinemas, nightclubs and gymnasiums, Nanjing's city government said.

All drugstores in Nanjing will suspend the sale of antibiotics and drugs for cough, fever and fighting viruses, both online and offline, it said.

All people living in the same building as a confirmed infected person must be quarantined at designated sites, the Nanjing COVID-19 joint defense and control headquarters said.

All the city's communities and villages have been ordered to adopt strict controls. Anyone entering communities or villages must have their temperature checked, present a green QR code and wear a mask.

"The mask should be changed every four hours," Yang Dasuo, deputy director of Nanjing health commission, told the news conference.

"Prepare more masks when you go out because the effectiveness of masks can be weakened on rainy days brought by Typhoon In-Fa."

Nanjing has shut down long-haul bus services out of the city since Tuesday. It has also banned all taxis and vehicles used by ride-hailing services from leaving the city. All passengers leaving by train or by car must present negative nucleic acid test results taken within 48 hours.