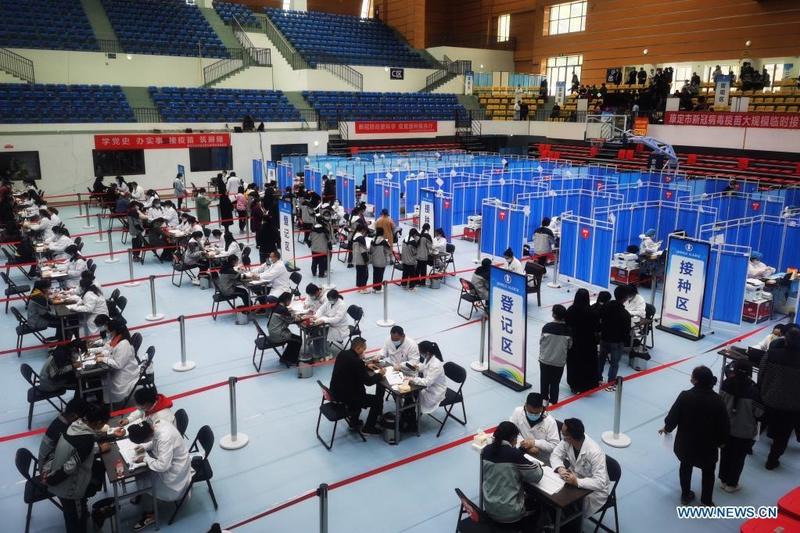 This photo shows a view of a vaccination site in Kangding city in the Tibetan autonomous prefecture of Garze, southwest China's Sichuan province, May 24, 2021. (PHOTO / XINHUA)

Although there isn't enough evidence now to support delivering COVID-19 booster shots to the general public, China is studying whether it is necessary to give additional doses to vulnerable groups and high-risk workers in order to boost immunity, health experts said.

Shao Yiming, a researcher at the Chinese Center for Disease Control and Prevention, said that based on initial observation, people with weak immune systems, such as the elderly and those suffering chronic illnesses, as well as workers at higher risk of contracting the virus or people planning to travel to high-risk areas, might need a booster dose six to 12 months after initial immunization.

"Whether this is necessary and when a booster shot should be rolled out are being researched," he said during a news briefing on Saturday.

For the general population who have been vaccinated within a year, there is no need to obtain a booster shot for now.

Shao said immunity triggered by any COVID-19 vaccines in use appears to decline to some extent as time goes by, but immunological memory is locked in, preparing bodies to swiftly generate strong antibodies when encountering the virus.

"For the general population who have been vaccinated within a year, there is no need to obtain a booster shot for now," he said.

China's mass immunization program is progressing smoothly, with over 1.65 billion doses administered as of Saturday, according to the National Health Commission.

The program had covered 150 million people age 60 and above and 12.48 million youths age 12 to 17 as of Wednesday, said He Qinghua, an official at the commission's Bureau of Disease Prevention and Control.

However, questions on vaccines' effectiveness and the necessity of a booster shot have been raised as the Delta variant, a highly contagious strain, has caused a local outbreak that was first detected in Nanjing, Jiangsu province, on July 20 and has spread to at least 14 provincial-level regions in the country.

Mi Feng, a spokesman for the commission, said on Saturday that China had reported 328 confirmed domestic infections in July, roughly equivalent to the total number of local cases from February to June.

"The main strain in circulation is the Delta variant, which poses a greater challenge to virus prevention and control work," he said.

Feng Zijian, a researcher at the China CDC, said the transmissibility of the Delta variant is estimated to be nearly double that of the original strain, and it spreads much faster and likely increases the risk of developing severe symptoms.

"Available findings suggest that the Delta variant might diminish protection from COVID-19 vaccines, but current shots can still have good preventive and protective effects against the strain," he said.

Shao added that breakthrough infections－people who contract the virus at least 14 days after being fully vaccinated－are relatively rare.

"No vaccine can provide 100 percent protection against viral infections. But on the whole, various COVID-19 variants can be controlled with existing vaccines," he said, adding that studies also show that domestic COVID-19 vaccines can effectively reduce rates of hospitalization, severe cases and deaths.

Shao noted that many developed countries, despite their high vaccination coverage rates, are grappling with a resurgence of outbreaks due to a rush to relax anti-virus policies, such as wearing masks and maintaining social distancing.

"This shows that inoculation must be used in conjunction with strict disease control measures," he said, calling on the public to continue practicing personal protective protocols.

Wang Huaqing, chief expert on immunization planning at the China CDC, said that it is not recommended at the moment to mix vaccines. He also urged the public to finish full immunization with multiple-dose vaccines on time.

Although the Delta variant is considered more transmissible and dangerous, He, from the commission, said the tried-and-tested virus control approach, including targeted lockdowns, rapid mass testing and isolation, is still effective at containing the virus.

However, he emphasized that implementation should be faster and more rigorous, and cooperation across different government departments and localities should be stepped up.