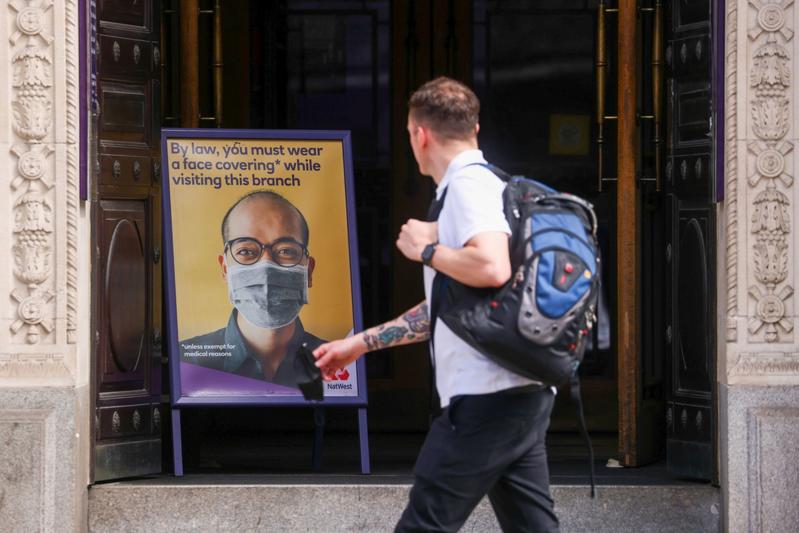 A sign informing customers they must wear a mask at the entrance to a NatWest Group Plc bank branch in the City of London, UK, on Monday, June 7, 2021. (PHOTO/BLOOMBERG)

As some governments and pharmaceutical officials prepare for COVID-19 booster shots targeting more-infectious virus variants, health authorities say it’s too early to tell if they will be required.

“We do not have the information that’s necessary to make the recommendation on whether or not a booster will be needed,” Soumya Swaminathan, the World Health Organization’s chief scientist, said in a Zoom interview Friday. The “science is still evolving.”

Such a call is “premature” while high-risk individuals in most of the world haven’t yet completed a first course of vaccination, Swaminathan said. Data from countries introducing precautionary extra inoculations later this year -- particularly for vulnerable people whose immunity to SARS-CoV-2 may wane faster -- will inform WHO’s guidance, she said.

More-transmissible variants, including the beta strain that emerged in South Africa, require higher antibody levels to prevent infection, prompting vaccine makers including Pfizer Inc and Moderna Inc to test whether tweaked versions of their existing shots will provide broader immunity

COVID-19 booster shots are likely to be rolled out in UK in the fall to avoid another winter surge. Seven different vaccines are being tested in volunteers in England in the world’s first booster study, Health Secretary Matt Hancock said last month.

The UK, which has inoculated a larger proportion of people than any other major economy, has been forced to delay a planned lifting of coronavirus restrictions amid a resurgence of cases driven by the delta variant. The strain, first reported in India, is the most infectious reported to date.

More-transmissible variants, including the beta strain that emerged in South Africa, require higher antibody levels to prevent infection, prompting vaccine makers including Pfizer Inc and Moderna Inc to test whether tweaked versions of their existing shots will provide broader immunity.

One dose of Novavax Inc’s variant-directed vaccine may provide sufficient protection against the beta strain in individuals previously immunized against COVID-19, according to pre-clinical research released this month by scientists at the Gaithersburg, Maryland-based company and the University of Maryland School of Medicine.

The modified shot also has the potential to provide broad protection against various strains if used as a primary vaccine regimen, said Gregory M. Glenn, Novavax’s president of research and development, in a June 11 statement.

So far, the existing US-approved vaccines work well enough to protect against beta, delta and two other strains that the WHO has designated as variants of concern, said Francis Collins, director of the National Institutes of Health.

“Nobody is saying you need a booster today,” Collins said in an interview with biologist Lee Hood at the Precision Medicine World Conference Thursday. “But boosters might very well be in our future at some point, and they might be here sooner if other variants pop up” that aren’t covered as well by existing vaccines.

As a minimum, vaccines will need to protect against hospitalization, ICU admission and death, according to Paul Offit, director of the Vaccine Education Center at the Children’s Hospital of Philadelphia. “With that bar, we probably would need a vaccine maybe every three to five years,” he said in a STAT biotech podcast on Thursday.

Immunization with a combination of vaccinations may offer longer immunity or fewer side effects for certain individuals, Offit said.

Early data from the UK, Spain and Germany suggest a “mix-and-match” regimen using two different types of vaccines generates more pain, fever and other minor side effects compared with two doses of the same inoculation, the WHO’s Swaminathan said.

Still, the so-called heterologous prime-boost combinations appear to spur a more robust immune response, leading to both higher levels of virus-blocking antibodies and the white blood cells that kill virus-infected cells, she said. 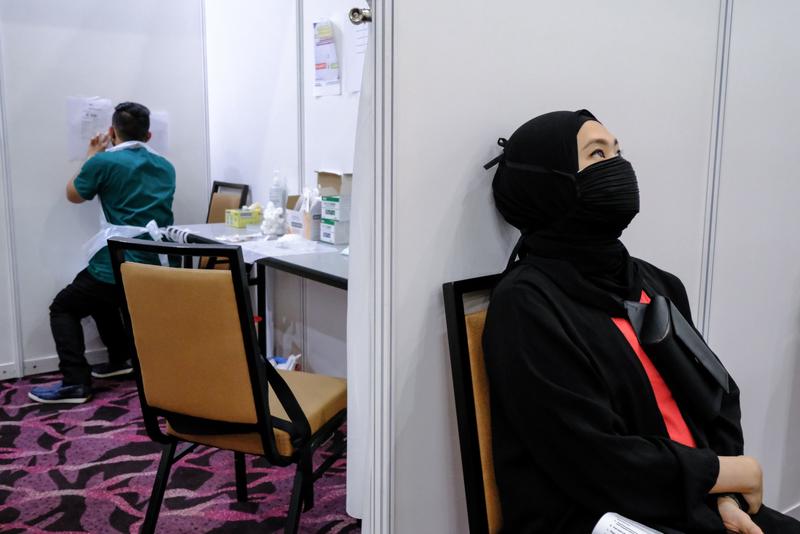 A woman waits to receive a dose of the AstraZeneca Plc COVID-19 vaccine at a special vaccination center (PPV) set up at the Ideal Convention Centre (IDCC) in Shah Alam, Selangor, Malaysia, on Tuesday, May 25, 2021. (PHOTO/BLOOMBERG)

Combinations of the AstraZeneca Plc and Pfizer-BioNTech shots are being considered in Malaysia, where the government is trying to speed up immunizations to achieve population-level immunity by year-end, Science, Technology and Innovation Minister Khairy Jamaluddin said on Wednesday.

“It seems to be working well, this concept of heterologous prime-boost,” Swaminathan said. “This opens up the opportunity for countries that have vaccinated people with one vaccine and now are waiting for the second dose they have run out of, to potentially be able to use a different platform vaccine.”