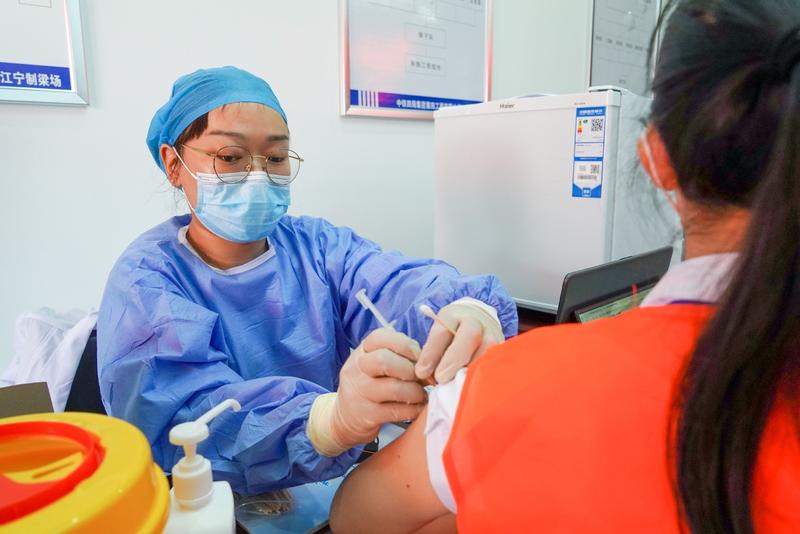 Amid rising concerns over the COVID-19 Delta variant's spread in China, virus experts and vaccine developers reaffirmed that domestic vaccines can provide protection against the highly transmissible strain.

Earlier this month, a real-world study conducted in Sri Lanka found that Sinopharm's vaccines can induce antibody responses in more than 95 percent of individuals

Shao Yiming, a researcher at the Chinese Center for Disease Control and Prevention, said from the point of view of a virologist, observed virus mutations only carry minor and early-stage changes to the original strain and they could hardly diminish approved vaccines' role in preventing hospitalizations, severe infections and deaths.

"All COVID-19 vaccines around the world are evaluated based on their efficacy in preventing clinical disease, as well as their role in reducing serious cases and deaths," he said, adding that against these barometers, no marked difference has been found in domestic vaccines' effects on key mutations.

Shao said it is not surprising to see breakthrough infections－people who test positive after being fully immunized－because no vaccine is capable of totally preventing people from catching the virus. Such cases have been reported recently in Nanjing, Jiangsu province, which is battling a local outbreak triggered by the very infectious Delta variant.

He added that an irrefutable benefit of vaccination lies in that it can always trigger robust "basic immunity" and protective memory cells in human bodies.

If immunity against the virus wanes in the long run, these memory cells can be "reawakened effectively" by delivering a booster shot and this will "produce very good protective effects", Shao said.

"Based on the current situation, we believe the goal of building an immunity barrier (in China) in the second half of this year can be realized," he said. The country had administered nearly 1.62 billion doses as of Thursday.

However, Shao noted that the emergence of breakthrough cases has underscored that research of virus mutations should be accelerated to help improve existing vaccination and disease-control policies.

Plenty of research led by vaccine manufacturers is already underway and has shown positive results.

Yang Xiaoming, president of Sinopharm's China National Biotech Group, said laboratory studies show that its inactivated vaccines can elicit neutralizing antibodies against the four most concerning variants in circulation globally, a sign of effective protection against the virus.

Earlier this month, a real-world study conducted in Sri Lanka found that Sinopharm's vaccines can induce antibody responses in more than 95 percent of individuals, and the level of antibodies against the Delta variant is similar to that found following natural infection.

The company said the study, published in the preprint website medRxiv, has added to evidence that its vaccines are highly effective against the dangerous strain.

"A large-scale, real-world study in Chile has shown that the company's two-dose inactivated COVID-19 vaccine can offer protection against the Gamma strain. In terms of the Delta variant, we have seen similar positive findings as the Gamma strain in laboratory experiments," she said.

Yang said the company is now exploring new vaccines targeting the Delta variant based on a set of mature technologies, procedures and standards already applied to its first-generation dose. However, the development process is at an early stage and research will be needed to assess a new candidate's efficacy, she added.

To fend off the looming threat of variants, Shao, from the China CDC, said administering a booster shot－an extra dose of vaccine on top of regular vaccination regimes－is a feasible approach, and researchers are collecting more data to determine immunization schedules and vaccine types.

Yang, from Sinovac, said deployment of booster shots must take the local epidemic situation and current vaccination coverage into consideration.

"In the opinion of enterprises and researchers, we suggest reaching a considerable number of the population with the first two doses before weighing the necessity of a third dose," she said.

Lu Xuexin, a researcher at the China CDC, said during an interview with Paper.cn that if booster shots are rolled out in the future, frontline and border staff members, as well as workers in high-risk industries and the public sector should be the first in line.