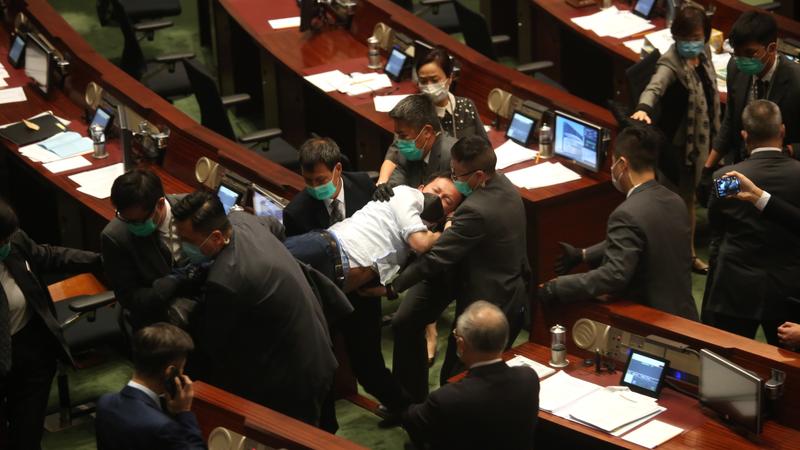 This May 28, 2020 photo shows opposition legislator Raymond Chan Chi-chuen being carried out of the chamber of the Legislative Council in Hong Kong for disorderly conduct. (PARKER ZHENG / CHINA DAILY)

Speaking on public broadcaster Radio Television Hong Kong’s Letter to Hong Kong program, Leung referred to conduct by the local opposition camp, including obstruction of the enactment of Article 23 of Hong Kong’s Basic Law in 2003, the “Occupy Central” movement in 2014 and the recent attempt to frustrate passage of the national anthem law, which outlaws insults to China’s national anthem.

By doing so, they were attempting to remove the central government’s authority over Hong Kong, Leung said. He characterized such conduct as “secession” — one of the four types of conduct proscribed by the Law of People’s Republic of China on Safeguarding National Security in the Hong Kong Special Administrative Region.

After the program, Lau Siu-kai, vice-president of the Chinese Association of Hong Kong and Macao Studies, a leading Hong Kong affairs think tank, said that even if some in the opposition camp did not publicly advocate “Hong Kong independence” through their speech and actions, they regarded Hong Kong as an “independent political entity” rather than part of the country.

A common scenario was that once the central authorities exercised their power according to the Basic Law, such people would “fly into a rage”, claiming “interference” or “overreach”, Lau said.

The central government had stepped in with the National Security Law to reverse the situation, helping local patriotic forces overcome opposition resistance, he said, and the Hong Kong Special Administrative Region government should make good use of the legal basis provided by the central government to safeguard national security.

Leung told the RTHK program that contrary to what Western media and politicians have said, Hong Kong’s National Security Law did not “terminate” the “one country, two systems” principle.

He said that if not for the “one country, two systems” principle, Beijing would have simply extended the coverage of the national security laws in force on the Chinese mainland to Hong Kong.

“‘One country, two systems’ is alive and well. So are the freedoms that Hong Kong people enjoy,” Leung said.