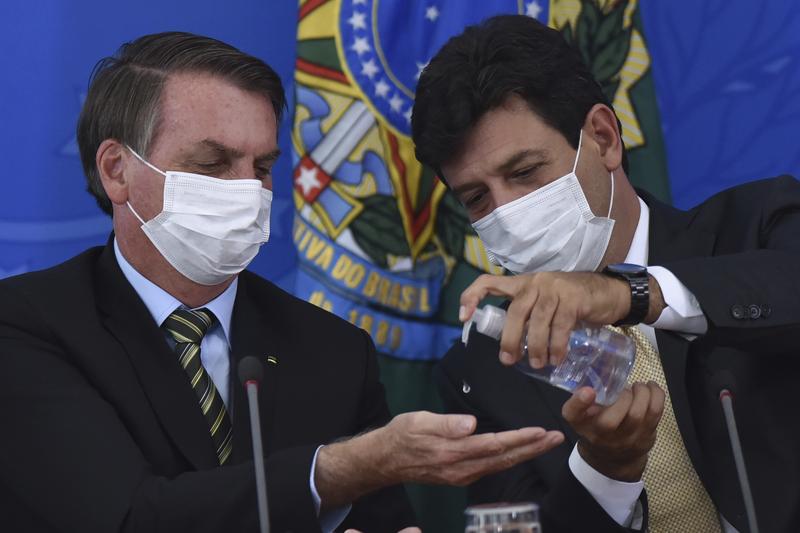 In this March 18, 2020 file photo, Brazil's Health Minister Luiz Henrique Mandetta, right, gives anti-bacterial gel to President Jair Bolsonaro as they give a press conference on the new coronavirus at Planalto presidential palace in Brasilia, Brazil. Mandetta criticized Bolsonaro’s dismissive handling of the COVID-19 pandemic on national television, April 12, and the president’s repeated threats to fire him are worrying health experts who say that amid governmental chaos, the health minister's advice to limit contact and take the virus seriously has played a major role in preventing Brazil’s epidemic from being even worse. (ANDRE BORGES / AP)

BRASILIA — Brazilian President Jair Bolsonaro fired his health minister on Thursday after clashing with him over how to fight the new coronavirus, and again called for states to end stay-at-home orders that he said were hurting the economy.

Few global leaders have done more than Bolsonaro to play down the pandemic, which has killed nearly 2,000 Brazilians

Bolsonaro accused the speaker of the lower house of Congress Rodrigo Maia of turning state governors against him in the coronavirus crisis and seeking to remove him from the presidency.

Few global leaders have done more than Bolsonaro to play down the pandemic, which has killed nearly 2,000 Brazilians. He has called the virus “a little flu” and criticized state governors for imposing restrictions supported by health experts and the popular outgoing minister, Luiz Henrique Mandetta.

In televised remarks met with pot-banging protests in several major cities, Bolsonaro said Mandetta did not fully appreciate the need to protect jobs and he called again for a resumption of business in Brazil, Latin America’s largest economy.

In an interview with CNN Brasil, Bolsonaro appealed to the governors to rethink their quarantine restrictions to allow the economy to breathe, warning that Brazil risked going broke and ending up “the same as Venezuela.”

“We need to return to normal, not as fast as possible, but we need to start having some flexibility,” Bolsonaro said. The government cannot afford emergency aid to the poor for much longer, he said.

The dispute at the highest reaches of Brazilian politics coincides with several countries debating when and how life should start returning to normal after coronavirus lockdowns, which are predicted to drive the global economy into recession.

Governors in the United States have formed regional coalitions to begin considering plans for reopening their economies, stoking friction with US President Donald Trump, an ally of Bolsonaro’s, who wants to see lockdowns lifted faster.

But while there are signs that the outbreak has peaked in the United States, medical experts agree that a peak in Brazil is still weeks away and it is too early to end social distancing.

“Do not think we are past a peak in growth of the virus. The health system is still not prepared for an acceleration,” Mandetta warned in his parting comments at the ministry.

Incoming minister Nelson Teich, asked at a news conference about the ministry’s position now that he was in charge, said there will not be any “sudden changes” in policy.

However, he added: “There is a complete alignment between me and the president.”

Teich, who founded an oncology group sold to United Healthcare in 2015, lacks the political experience of his predecessor, a former lawmaker who had begun to upstage Bolsonaro.

Boslonaro’s popularity has slid and he faces nightly protests from Brazilians banging pots from their windows over his handling of the outbreak.

The Health Ministry’s response to the epidemic was rated “good” or “great” by 76 percent of Brazilians surveyed by pollster Datafolha. Just 33 percent of those surveyed gave Bolsonaro the same ratings.

Senator Major Olimpio, Bolsonaro’s former right-hand man in Congress, praised Mandetta for sticking to scientific principles in the public health crisis and urged the new minister to defend the need for isolation measures.

“Teich has defended social distancing. If he persists in this, he will have serious problems with President Bolsonaro and won’t last 30 days in office, or he will have to tear up his degree and contradict the entire global scientific community,” the right-wing senator said in a video posted on social media.

Maia, who defended Mandetta’s insistence on social distancing to curb the epidemic, told CNN Brasil separately that the country’s Congress was passing the legislation needed to pull the economy through the crisis and accused the president of playing politics.

Maia said the firing of Mandetta in the midst of the coronavirus outbreak scared most Brazilians.

The spread of the coronavirus in Brazil has accelerated to 30,425 confirmed cases, with some 200 fatalities per day bringing the death toll to 1,924 on Thursday, according to Health Ministry data, the highest in Latin America.