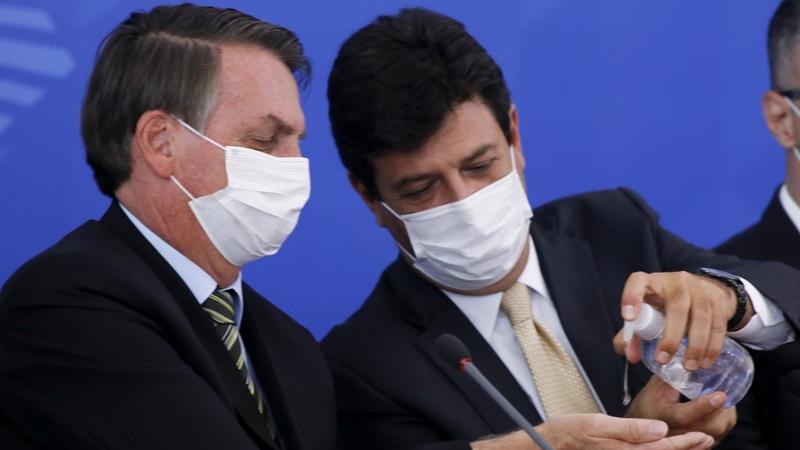 In this photo taken on March 18, 2020, Brazilian President Jair Bolsonaro, left, and his Health Minister Luiz Henrique Mandetta sanitize their hands wearing face masks during a press conference related to the new coronavirus, at the Planalto Palace in Brasilia, Brazil. (PHOTO / AFP)

BRASILIA — Brazilian health officials braced on Wednesday for President Jair Bolsonaro to fire his health minister over disagreements on how to handle the coronavirus outbreak, with at least one secretary offering his resignation in protest.

In a defiant news conference, Health Minister Luiz Henrique Mandetta acknowledged his differences with Bolsonaro and said he had discussed a search for his replacement with the presidential chief of staff.

Bolsonaro and Mandetta have been at odds over the handling of the coronavirus epidemic for weeks, as the president played down the gravity of the outbreak, touted unproven drugs and attacked governors over lockdown orders applauded by Mandetta.

“The president has made clear that he would like a different position from the Health Ministry,” Mandetta said in televised remarks. “I’m offering a way forward based on science. Outside of that, you’d have to find alternatives.”

Mandetta said he had refused the resignation of Wanderson de Oliveira, secretary of health vigilance, a key figure in the fight against the epidemic. In a note to his team seen by Reuters, Oliveira said that Mandetta, his boss, would likely be fired “in coming hours or days.”

Mandetta emerged from relative obscurity with technocratic daily briefings on the coronavirus presenting the latest science, stressing the need for social distancing measures, and earning praise from across the political spectrum.

The Health Ministry’s response to the epidemic was rated “good” or “great” by 76% of Brazilians surveyed by pollster Datafolha this month. Just 33% of those surveyed gave Bolsonaro the same ratings.

Some 1,736 people have died of COVID-19 in Brazil, out of more than 28,320 confirmed cases of the respiratory disease, according to Health Ministry data on Wednesday. There were more than 3,000 new cases recorded in the past day, the biggest daily jump registered since the outbreak began in late February. More than 200 new deaths were registered, matching the previous day’s record rise.

After dodging what many expected would be a firing last week, Mandetta added to tensions in a Sunday television interview. He urged the government to speak with a unified voice, effectively calling out Bolsonaro for downplaying the threat ahead of what may be the two toughest months for the outbreak.

After days without commenting on Mandetta, Bolsonaro told supporters on Wednesday morning that he expected to “sort out the health situation,” without making a direct reference to his minister.