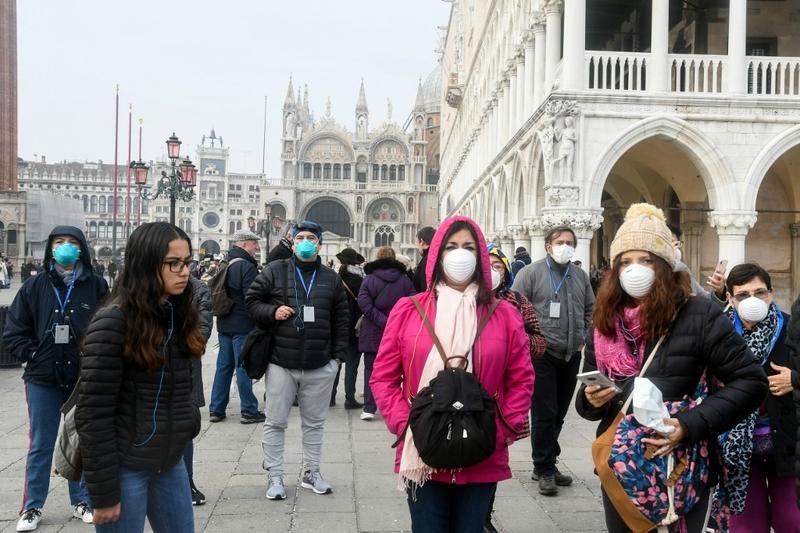 Tourists wearing protective masks visit Venice on Feb 25, 2020, during the usual period of the Carnival festivities which have been cancelled following an outbreak of the novel coronavirus in northern Italy. (ANDREA PATTARO / AFP)

RIO DE JANEIRO/MADRID/BERLIN/VIENNA/LONDON- A 61-year-old man in Sao Paulo has tested positive for the new coronavirus, the first case of the disease in Latin America, as the outbreak in Italy worsened.

The man traveled to northern Italy for work Feb 9 through Feb 21, the country's Health Ministry said in a statement published on its website and in its Twitter account.

While dozens of people have been tested from Mexico to Brazil with similar symptoms, this marks the first case in Latin America.

The person lives in Sao Paulo, which has the largest urban population in the Americas, with about 20 million people in the greater metropolitan area. The Brazilian megacity is also the home to the country’s financial industry and a business hub with the greatest concentration of multi-national companies and executives.

The outbreak of coronavirus in northern Italy worsened on Wednesday, with one more death and 52 new cases reported, all in northern Italy, while countries around Europe reported additional infections linked to the Italian flare-up.

The European Union’s health chief Stella Kyriakides, on a visit to Rome, cautioned against panic as Italy’s government prepared measures to try to bolster the economy, which looks certain to tip into recession as a result of the contagion.

Underscoring the concerns, the annual Salone del Mobile design and furniture fair, one of the highlights of Milan’s business calendar, was postponed from April until June.

The head of the national Civil Protection agency, Angelo Borrelli, told reporters the death toll had risen to 12 from 11 the day before, with a 69-year old man dying in the northern region of Emilia Romagna.

In all, some 258 cases have been registered in the epicenter of Lombardy since Friday, including a four-year-old girl and five other children — the first such infections in the country.

In neighboring Veneto, the number of people confirmed to have caught the flu-like virus was 71, while instances of the illness surfaced in eight other regions, pushing the total number of cases nationwide above 370.

Italians or people who had recently visited the north of the country have tested positive in Greece, Spain, Austria, Switzerland, Croatia and France since the weekend, showing how fast the illness - which was first identified in China last month - could spread.

Catalan regional health authorities said a 36-year-old Italian woman, resident in Barcelona, had tested positive after a recent trip to the north of Italy

Several European Union countries advised their citizens against visiting northern Italy, although the outbreak was already spreading to other regions in the south.

Britain has started random tests for coronavirus on flu patients in order to have an early warning system in place in case the outbreak becomes more widespread in the country, a senior health official said.

Britain has so far had 13 cases of coronavirus.

The random tests for the virus will be carried out at 11 hospitals and 100 general medical offices on people who have flu symptoms including a cough, plus shortness of breath and a fever.

“This testing will tell us whether there’s evidence of infection more widespread than we think there is. We don’t think there is at the moment,” Public Health England’s medical director, Paul Cosford, told BBC radio on Wednesday said.

“The other thing it will do is, if we do get to the position of more widespread infection across the country, then it will give us early warning that that’s happening,” he said.

A large Canary Islands hotel was locked down for coronavirus tests on Tuesday after a guest and his wife were found to be infected, as Spain also reported its first two cases of the disease on the mainland.

Catalan regional health authorities said a 36-year-old Italian woman, resident in Barcelona, had tested positive after a recent trip to the north of Italy. Twenty-five people who came into contact with her will be quarantined at home for two weeks.

The four-star H10 Costa Adeje Palace hotel in Tenerife went into lockdown after an Italian doctor on holiday on the island tested positive for the virus on Monday. His wife tested positive on Tuesday, the regional government said. 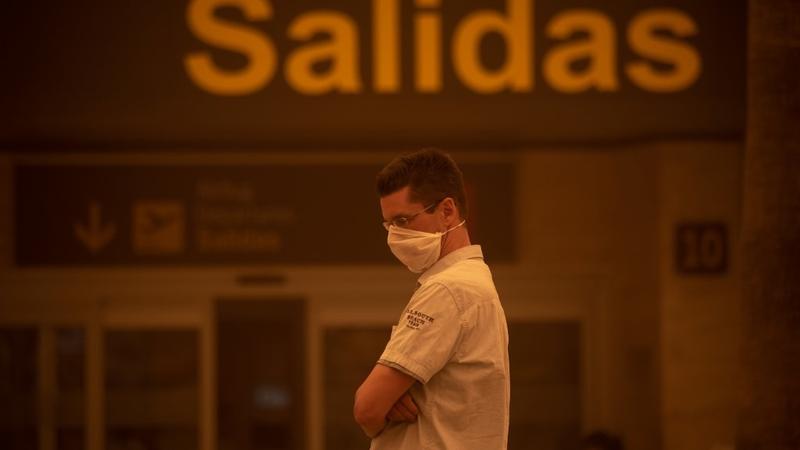 A man wearing a mask stands outside Tenerife South-Reina Sofia Airport during a sandstorm on Feb 23, 2020 on the Canary Island of Tenerife. ( DESIREE MARTIN / AFP)

Shortly afterward, authorities in Valencia advised that a man had been diagnosed with the virus in the city of Villareal.

The doctor and his wife had been moved to a hospital isolation ward, and other hotel guests and staff would be tested for the virus, a process that will take some days, health authorities said.

On Wednesday, Austria also sealed off the 108-room Grand Hotel Europa in the Alpine tourist hub of Innsbruck after an Italian receptionist tested positive for the flu-like virus

Guests will remain there until the results of a second test on the doctor are determined and, depending on that outcome, “appropriate health measures will be taken”, a Spanish government spokeswoman said.

On Wednesday, Austria also sealed off the 108-room Grand Hotel Europa in the Alpine tourist hub of Innsbruck after an Italian receptionist tested positive for the flu-like virus.

The country has quarantined 12 people who were in close contact with the female receptionist and his boyfriend, the local government in the province of Tyrol said on Wednesday.

The infected couple, both 24, last week visited their home town near Bergamo in Lombardy.

While the woman works at the hotel in Innsbruck, a hub for Alpine tourism less than an hour’s drive from the Italian border, her boyfriend was visiting, officials said.

In Germany, a 25-year-old man living in the southern state of Baden-Wuerttemberg has tested positive for coronavirus after a trip to Milan, and another man further north is in a critical condition with the disease, authorities said on Tuesday.

Nurses with face masks stand outside the hospital of Ahepa in Thessaloniki on Feb 26, 2020. (SAKIS MITROLIDIS / AFP)

The Baden-Wuerttemberg health ministry said the man in the southern state, who had likely become infected during his visit to Italy, had contacted authorities after coming down with flu-like symptoms. He will be treated in isolation, it added.

“People in close contact with the patient will be kept in home isolation and be asked about their state of health every day,” it said. “As soon as a contact person develops symptoms, they will also be isolated in hospital.”

San Francisco declared a local emergency over the coronavirus on Tuesday, despite having no cases, as US officials urged Americans to prepare for the spread of infections within their communities

In North Rhine-Westphalia, the state health ministry said a man there was admitted to hospital on Monday afternoon with symptoms of severe pneumonia.

“The patient is in a critical condition and is currently being isolated in the intensive care unit,” the ministry said.

“The patient’s wife is also being treated as an in-patient with symptoms of a viral disease. Her condition is currently stable. The diagnosis on whether she has also been infected with the virus is still pending,” it added in a statement.

Schools and kindergartens in the Heinsberg district of North Rhine-Westphalia, where the man is from, will remain closed on Wednesday as a precaution, the ministry said.

The new confirmed cases take to 18 the total number of coronavirus cases in Germany. There have been no deaths.

San Francisco declared a local emergency over the coronavirus on Tuesday, despite having no cases, as US officials urged Americans to prepare for the spread of infections within their communities.

California’s fourth-largest city said it made the move to boost its coronavirus preparedness and raise public awareness of risks the virus may spread to the city.

The US Centers for Disease Control and Prevention (CDC) told the United States on Tuesday to prepare for community spread after infections surfaced in several more countries.

The 14 confirmed US cases of coronavirus have been mostly travel related, with only two cases of person-to-person spread. There are also 39 cases among Americans evacuated from the Diamond Princess cruise ship in Tokyo and from Wuhan, China.

Greece has confirmed its first coronavirus case, the health ministry said on Wednesday.

The patient was a 38-year-old Greek woman who had traveled from an area of northern Italy, said Sotiris Tsiodras, a representative of the Ministry of Health.

“She is in good health and is being monitored by a team of exceptional colleagues in Thessaloniki,” Tsiodras told a news briefing.