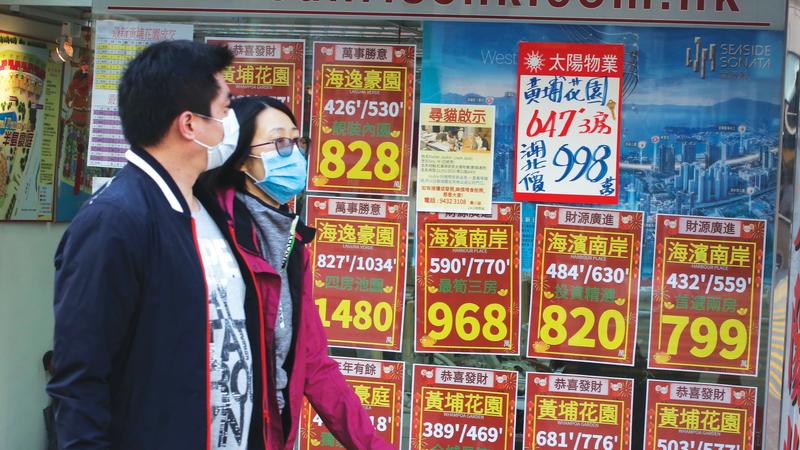 HONG KONG - For several weeks, the coronavirus has brought Hong Kong to a virtual standstill, keeping shoppers, office workers and even anti-government protesters off the streets.

The city's flat hunters, however, are on the prowl. In one of the most unaffordable cities in the world, a drop in prices is hard to resist.

"I feel prices will go up again and it's better not to wait," said 60-year-old Chan, who subscribed for a two-bedroom for her son after visiting a Wheelock and Co salesroom in the Tsim Sha Tsui tourist district.

Transaction volumes hit three-month highs in February, when the outbreak was at its worst in Hong Kong and when other key economic indicators are expected to have hit record lows

Chan, who spoke through a surgical mask and did not give her full name as she did not want details of her personal finances be known, said she saw an opportunity in the coronavirus.

Memories of the 2003 Severe Acute Respiratory Syndrome (SARS) have prompted most Hong Kong people to follow strict hygiene and social distancing guidelines. The other key lesson learned from that experience, some say, is that home prices recover quickly.

As the local stock market was down 4 percent, a constant stream of potential buyers poured into the salesroom behind Chan. The 208 flats, each offered with a discount of up to 22 percent at prices ranging from HK$6.5 million (US$836,292.52) to HK$17.7 million (US$2.28 million), will start selling on Saturday and are already 14 times oversubscribed.

"I was surprised," said Wheelock Properties managing director Ricky Wong, adding the next batch of flats in the building would probably sell at a higher price. "Home demand in Hong Kong is very strong after all."

Transaction volumes hit three-month highs in February, when the outbreak was at its worst in Hong Kong and when other key economic indicators are expected to have hit record lows.

After holding out for several months, Wong, who owned his flat for over 20 years and wanted to sell, cut his price by 9 percent in late February. Six groups of potential buyers turned up before the end of that day and he sold it for HK$11.56 million.

"Has the property market suddenly heated up? Was there any positive news?" Wong, who also only gave his surname, said in his flat, wearing a surgical mask.

I started looking in December and prices have already declined somewhat. I don't think they will drop much more

Property agents said secondary market prices found support after falling as much as 8 percent in some developments. March volumes so far looked even better, they said.

In 2003, SARS chopped 7 percent off flat prices from March to July at a time when they were already half their 1997 peak. They recovered to pre-SARS levels by October and have since quintupled.

Hong Kong's property sector has proved largely resilient during the China-US trade tension and the sometimes violent protests last year, which pushed the financial hub into its first recession in a decade.

The market, which is suffering from a severe supply shortage, has slowed, but January prices were only 4.7 percent below their peak in May.

Lower interest rates, which in Hong Kong move in tandem with US rates, and unprecedented government handouts are contributing to the buy-the-dip rush.

The longer-term outlook may be less encouraging.

Unemployment and bankruptcies were set to rise regardless of the pandemic, whose impact could be severe.

"(But) I'm more concerned about the potential wave of company closures."

For many in the Wheelock salesroom, the only major virus-related concern was the proximity of other people.

"I started looking in December and prices have already declined somewhat. I don't think they will drop much more," said 29-year-old Xuthus Chan, who planned to buy a second property for rental income.

"I'm not worried about the epidemic, it will be over eventually," Chan said.