HK is officially in a recession

By Pamela Lin and Edith Lu 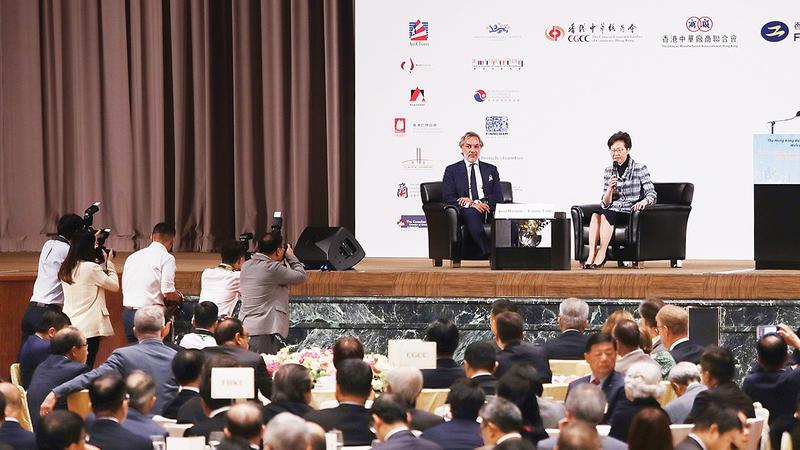 It’s official. Hong Kong has slipped into a recession for the first time in a decade, driven by the bruising US-China trade conflict and what the SAR government called an “abrupt deterioration” in the local economy due to the grave impact of the nearly five months of anti-government protests.

According to data released by the Census and Statistics Department on Thursday, Hong Kong’s economy shrank 2.9 percent year-on-year, marking the first time it has contracted on such a scale since 2009.

The city’s gross domestic product dwindled 3.2 percent in the third quarter of this year — from 0.5 percent in the previous quarter — as imports and exports, retail sales and tourist arrivals plummeted.

The city has proved that it can withstand external economic shocks, such as the Asian financial crisis in the late 1990s and the financial tsunami 10 years ago. But then, what’s happening in Hong Kong now is unprecedented

‘No room for optimism’

Recession is defined as having negative economic growth for two consecutive quarters, and the third quarter saw the first year-on-year contraction for a single quarter since the Great Recession of 2009.

Chief Executive Carrie Lam Cheng Yuet-ngor warned at a business luncheon on Thursday that the Hong Kong economy has “no room for optimism”.

“The city has proved that it can withstand external economic shocks, such as the Asian financial crisis in the late 1990s and the financial tsunami 10 years ago. But then, what’s happening in Hong Kong now is unprecedented,” she said.

The SAR is very likely to record full-year negative growth after being crippled by months of violent protests, particularly in the tourism and retail sectors, among other pillar industries, Lam added.

“With the local social incidents taking a heavy toll on inbound tourism, exports of services recorded the biggest year-on-year drop since the second quarter of 2003,” a government spokesperson said.

According to the Hong Kong Tourism Board, total visitor arrivals tumbled 34.2 percent in September year-on-year. The drop in the number of tourists from the Chinese mainland was particularly sharp — down 35 percent. In the first half of last month, the number of visitors to Hong Kong had plunged by about 50 percent compared to a year ago, resulting in hotels registering just two-thirds occupancy on average.

The retail industry also took a severe beating, with many shops forced to close early, and hundreds of restaurants may have to shut down if the violent protests persist.

Lam said the government will continue to integrate services and streamline processes for funds to reach businesses that need help as soon as possible.

According to the government, the number of applications from enterprises for various funds is rising, showing that the measures could offer concrete help to certain companies.

Looking ahead, the government spokesperson said private consumption and investment sentiment will continue to be dampened due to the social unrest which has yet to show signs of abating, adding that all the surveys in recent months have pointed to “very pessimistic” local business sentiment.

Just before the government announced Hong Kong’s third-quarter economic figures, HSBC revised down its forecast for the city’s full-year economic growth to a 0.5 percent contraction from 1 percent.

George Leung Siu-kay, HSBC’s  Asia-Pacific adviser, said the nearly five months of social turmoil would hurt the local economy, but the situation could turn out better if law and order is restored.

Terence Chong Tai-leung — executive director of the Chinese University of Hong Kong’s Lau Chor Tak Institute of Global Economics and Finance — believed that the city’s economy would improve once the anti-government protests blow over and tourists start streaming in.