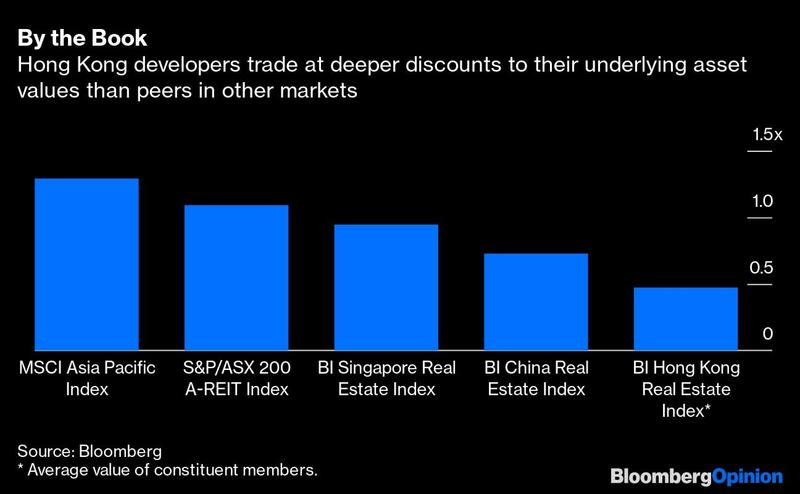 The novel coronavirus virus outbreak following months of anti-government protests stemming from the extradition bill incident might seem like a toxic cocktail for the world’s least affordable property market. Yet Hong Kong’s real estate insiders are in buy mode.

The plan by the family of Peter Woo to take Wheelock & Co private suggests that those with the most privileged vantage point see a limit to any virus-induced decline in property prices, and consider there’s value to be extracted by removing assets from the public markets. It may not be the last such maneuver.

The plan by the family of Peter Woo to take Wheelock & Co private suggests that those with the most privileged vantage point see a limit to any virus-induced decline in property prices, and consider there’s value to be extracted by removing assets from the public markets

That might seem surprising. A widely followed index of residential prices compiled by Centaline Property Agency has dropped only 6.5 percent from its record high in June last year. The Hong Kong government forecasts the economy may contract as much as 1.5 percent this year, as the virus disrupts business, scares off tourists and damps spending. In the fourth quarter, gross domestic product shrank 2.9 percent from a year earlier, the worst performance since the depth of the global financial crisis in 2009.

The explanation lies in the divergence between publicly traded share prices and values of the underlying real estate. Hong Kong property companies trade at deep discounts to their book value, meaning that taking a company private can be a value-enhancing proposition even if property prices continue to fall.

Wheelock is a holding company whose principal assets are its controlling stakes in publicly traded Wharf Real Estate Investment Co. and Wharf Holdings Ltd. The Woo family, which owns 67 percent of Wheelock, is offering one share each of Wharf REIC and Wharf Holdings, plus HK$12 (US$1.54) cash for each share held in the privatization. The deal values Wheelock shares at HK$71.90 each, or 52 percent more than the last trading price before the stock was halted on Feb 24.

That’s not as generous as it might appear. Wheelock was trading at a 64 percent discount to its its estimated end-2020 book value before the offer, according to Bloomberg Intelligence. The median forward price-to-book ratio of companies in the Bloomberg Intelligence Hong Kong real estate group is 0.47 times. The discount has widened from 0.51 times as the end of 2018 as record property prices prompted investors to discount the risk of a future tumble.

Woo isn’t the only business owner to take such a step. Hopewell Holdings Ltd was delisted by its then-83 year-old founder Gordon Wu last year. And in 2016, New World China Land Ltd. was taken private by the controlling Cheng family.

Hong Kong property companies trade at deep discounts to their book value, meaning that taking a company private can be a value-enhancing proposition even if property prices continue to fall

The discount on Hong Kong property shares also reflects the dominance of controlling family shareholders, which fuels concern among investors that minority interests may come second. By contrast, shares in Singapore’s REITs tend to be more widely held. Even some of the Chinese mainland’s debt-laden real estate developers command higher valuations because investors see them as more aggressive in pursuing growth. China Evergrande Group, for example, trades at 1.3 times book value.

At some point, though, prices can become too cheap, calling into question the value of maintaining a listing — and offering majority owners the chance to pick up assets from minority investors for less than they might fetch in the market. In 2010, Wheelock was trading at 0.85 times book.

Wheelock’s prospects may be better than those of its subsidiaries. Wharf REIC and Wharf Holdings are largely focused on shopping malls and offices, with assets such as the Times Square development in Hong Kong’s prime Causeway Bay shopping district, which have been badly affected by the slump in tourism and drop in Chinese business activity. For its own account, Wheelock is also a developer of mass residential housing, where prices have stayed resilient. Hong Kong home supply remains tight and interest rates and leverage are low. Wheelock managed to sell apartments at its Lohas Park project in the eastern district of Tseung Kwan O even at the height of the protests last year.

It’s telling that bidding for land sold by the government has remained heated amid the coronavirus outbreak. Last month, Wheelock outbid eight other developers for a site in Lohas Park that could provide 2,000 homes.

Wheelock isn’t the only unloved Hong Kong developer. The Jardines group-controlled Hongkong Land Holdings Ltd, the biggest office landlord in the central business district, trades at 0.3 times forward book. There’s a similar valuation for Kerry Properties Ltd, a builder of luxury housing owned by Malaysian billionaire Robert Kuok. Both were trading at about 0.5 times at the end of 2017.

Keep an eye on developer share prices. As malls remain half-empty, some tycoons may be doing some home shopping of their own.