Mayor of Wuhan: Stay away

By ZHOU LIHUA in Wuhan and ZOU SHUO in Beijing 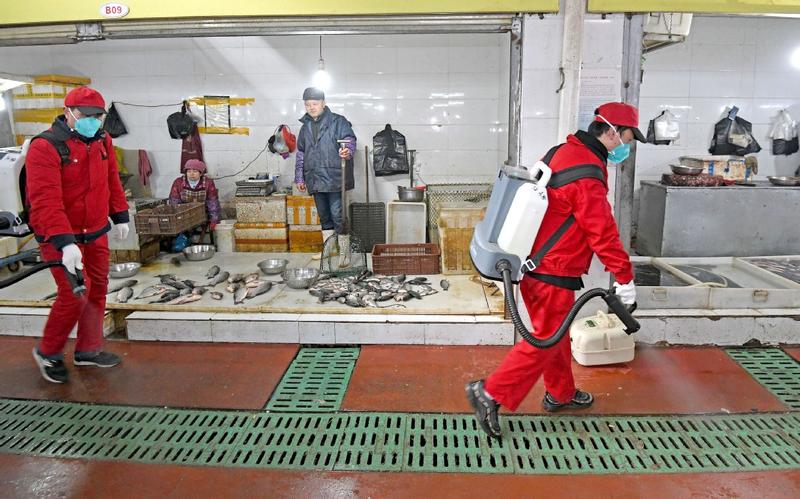 The mayor of Wuhan, Hubei province, called on people not travel to and from the city in order to combat the ongoing pneumonia outbreak.

Mayor Zhou Xianwang said during an interview with CCTV on Tuesday that reducing the flow of people will also decrease the possibility of the virus spreading and lighten the pressure on disease prevention and control efforts.

Wuhan set up a prevention and control center to combat the outbreak on Monday, the city's health authorities said.

Led by Zhou, the center heads eight task forces made up of authorities involved in emergency management, publicity, transport, market regulation, medical treatment and epidemic control and prevention, according to the Health Commission of Wuhan.

The city will strengthen measures to scan passengers for higher body temperatures at airports, train and bus stations and ports, and reduce or cancel all unnecessary large gatherings.

Patients with serious symptoms should be treated by a team of medical workers with a specific plan, and hospitals should strengthen the protection of their staff to prevent infection within hospitals.

The city will promptly and objectively release information about disease prevention and control.

Traffic management authorities in Wuhan are searching vehicles entering or leaving the city for live poultry or wild animals. Health experts say animals are the likely source of the new coronavirus responsible for the disease.

All exit ports in the city have installed temperature monitoring devices, and all passengers traveling abroad will be required to undergo body temperature checks. Passengers with higher temperatures will be placed under observation or persuaded not to travel, the city's tourism authorities said on Tuesday.

All passengers with higher than normal temperatures will be registered and transferred to nearby medical facilities. They will get a full refund of their tickets and rescheduling charges, it said.

All modes of public transportation in the city have been subject to daily sterilization and ventilation since Sunday, the health commission added.

He Houpeng, deputy director of the commission, said that the government will pay for the remaining medical bills of all confirmed pneumonia patients not covered by medical insurance.

The city will strengthen measures to scan passengers for higher body temperatures at airports, train and bus stations and ports, and reduce or cancel all unnecessary large gatherings

The city will delay its annual festival at the city's major tourism attractions for the upcoming Spring Festival amid the ongoing outbreak, the city's tourism authorities said on Tuesday. The bureau did not specify how long the event will be delayed.

A high-level expert team organized by the National Health Commission on Monday answered some of the most concerning questions about the new coronavirus that has caused the pneumonia outbreak in Wuhan, Hubei province, which has spread to multiple provincial regions across China and some overseas locations.

Origin of the virus

Zhong Nanshan, a member of the Chinese Academy of Engineering and a prominent expert in respiratory diseases, said the virus very likely originated from wild animals.

Gao Fu, head of the Chinese Center for Disease and Control and Prevention: We have collected evidence that the virus is linked with wild animals in a seafood market in Wuhan, which was closed following the report of the outbreak. We have identified the new coronavirus in the market. We are not certain of the source of infection, as we have not found out which particular animal is responsible. All six coronaviruses known to humans, including the one that caused severe acute respiratory disease, originated from wild mammals.

Yuan Guoyong, a member of the Chinese Academy of Engineering: We should not eat wild animals. We must respect the life of wild animals and their habitats, because we share the same Earth.

Yuan Guoyong: The new coronavirus is different from SARS, and the two viruses result in different clinical conditions and infectiousness. At present, it is not clear how the new virus will develop and how it affects humans, and a lot of work needs to be done.

Li Lanjuan, a member of the Chinese Academy of Engineering: Since the SARS outbreak, China has built a very good disease prevention and control system, and our capacity to prevent and control diseases has greatly increased. This is why we successfully developed testing methods for the new virus soon after the start of the outbreak.

Zhong Nanshan: I am very confident the SARS outbreaks 17 years ago will not repeat. We successfully identified the new coronavirus within two weeks of the outbreak, and we have very good disease monitoring and quarantine systems. So I do not think the new virus will result in damage to society and the economy as SARS did.

Means of disease control and prevention

Zhong Nanshan: The best way to prevent and control the disease is to identify and diagnose cases as early as possible, and put them under quarantine for treatment. Various authorities, including those in health authorities, should take responsibility. For Wuhan, it is important to minimize the exportation of the virus. The city will take strict measures to identify cases at its airport and railway stations. Temperature measuring should be applied, and we suggest residents in the city with abnormal temperatures not leave, which is very important.

Zeng Guang, chief epidemiologist at the Chinese Center for Disease Control and Prevention: For Wuhan, all the public should act, and all government departments should join efforts for disease control.

Availability of effective drugs for the disease

Zhong Nanshan: Similar to SARS, there is no effective drug for the disease at present, but we are doing animal research and trying some traditional Chinese medicines.

Impact on the peak traffic season around the Spring Festival holiday

Zhong Nanshan: Now it is a critical state. We estimate the number of cases will continue rising during the 40-day travel season, which started on Jan 10.

Zeng Guang: We hope we can take measures so the number of cases will not rise too much and can decrease rapidly after the peak traffic season.