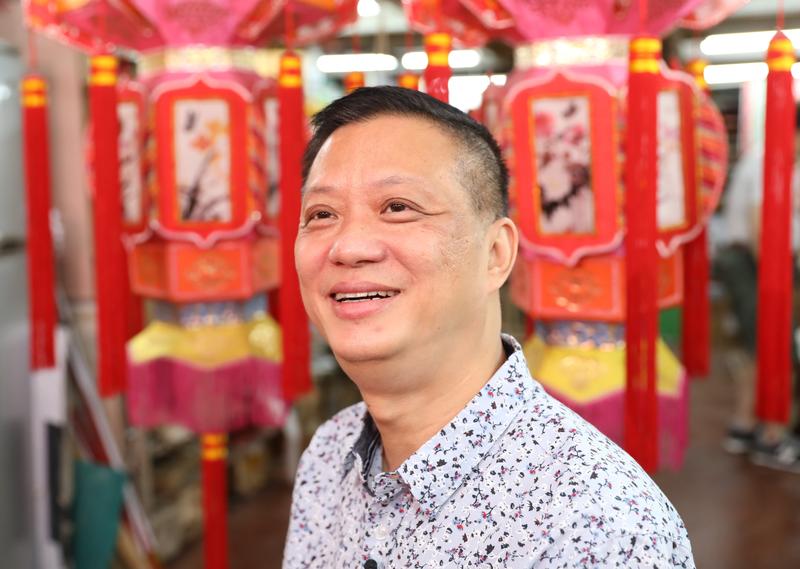 HONG KONG－At the heart of Central, the bustling business district in Hong Kong surrounded by skyscrapers, an unusual "building" has attracted the attention of many locals.

Made mainly of bamboo, iron wire and fabric, a brightly colored, four-story-high lantern has set a new Guinness World Record for the highest hanging paper lantern in the world. The lantern will be on display from the beginning of July to mid-October, in celebration of the 25th anniversary of Hong Kong's return to the motherland.

Hong Kong and the Chinese mainland must work together for the paper crafting technique to survive and develop.

The creator behind the traditional Chinese paper lantern is Ha Chung Kin, also known as the "king of paper crafting" in Hong Kong. Having worked as a paper craftsman for more than 40 years, the 61-year-old has witnessed both the glorious and difficult times of paper crafting, now recognized as an intangible cultural heritage in Hong Kong.

It was not the first time that Ha has set a world record. Back in 2017, he made a paper lantern more than 9 meters high, taking home a Guinness record for the world's largest hanging paper lantern. But the record was soon broken by the Japanese.

"The paper crafting technique has been developed and handed down by our Chinese ancestors. We can't lose to others," Ha says.

To win the record back, a lantern must be at least 13 meters high, and that would require a significant amount of experience from the craftsmen.

This time, Ha took the role as the teacher, or "master", in guiding his students and some disadvantaged groups in making the lantern. For two years, master Ha and his students worked together on the components of the lantern.

On the first day after the lantern was completed, Hong Kong was hit by a typhoon.

"My phone kept ringing and people kept asking if the lantern would be destroyed by the wind. I assured them it would be OK," Ha says.

The typhoon passed, and the lantern was good. Ha said that, since he knew from the very beginning that the lantern would be displayed outdoors for three months, he had already taken factors like typhoons into account in the design, and used the best fabrics and other raw materials.

"It is very exciting to see another world record made through an extraordinary display of skill," he says.

Paper crafting is a technique that embodies the history and culture of different ethnic groups and carries significant social and cultural values. Ancient Chinese people used simple materials such as bamboo splints, rice paper strips as well as paper to make all kinds of crafted products, including lanterns, dragons, lions and paper offerings.

Back in the early 20th century, the industry was booming in Hong Kong, with large-scale paper crafting workshops making substantial profits. In the 1960s, handmade lanterns were popular even outside China, and craftsmen could make a sound living exporting their products overseas.

However, as traditions give way to the modern city lifestyle, the technique of paper crafting began to fade. Ha remembered his workshop had some 20 paper crafting "masters" during the 1980s, but there are only four now, including himself and his son.

"The young people would rather make quick money in finance than spend a whole day here facing the same bunch of people," Ha says.

In 2017, the paper crafting technique was put on the Representative List of the Intangible Cultural Heritage of Hong Kong. With government support, Ha and other craftsmen started to teach citizens and students the technique through various workshops.

At a local primary school, Ha teaches the students how to make a fish-shaped paper lantern for holiday celebrations. He makes the body of the fish, while the kids are responsible for the scales.

"Every day after school they make one fish scale to put on the lantern. It will be done in around a month, just in time for Mid-Autumn Festival," he says.

In his career as a professional craftsman, Ha has made thousands of artworks, but there is a single creation that he is most proud of.

The requirement from the client was simple: Ha could make any paper craft he wanted as long as the artwork could be understood by viewers instantly.

Ha spent several days brainstorming, but with no luck. The TV was on and news came out that Chinese astronaut Yang Liwei had returned safely from China's first manned spaceflight.

"The idea struck me instantly that I should make a craft that speaks about the spirit of Chinese astronauts," he says.

In 15 minutes, he drew up the design for the paper craft, which featured astronauts, rockets and other space-themed objects. The project was displayed in a park, where many citizens came by to take photos.

For Ha, the Chinese mainland is both his source of inspiration and his roots.

As the youngest son of the renowned lion dance master Ha Kwok Cheung, he nurtured a deep passion for traditional Chinese culture from a young age. His grandfather was a martial arts master from Guangdong province who developed kung fu skills, both on the mainland and in Hong Kong.

He also traveled to Guangdong on a regular basis to find out more about paper crafting, and exchanged ideas with locals on how to better protect cultural heritage.

In Dongguan of Guangdong, Ha Chung Kin has a factory with more than 300 workers making different kinds of paper crafts.

"Hong Kong and the Chinese mainland must work together for the paper crafting technique to survive and develop," he says.

He is confident that the demand for paper crafts will always exist.

"We Chinese like to put up lanterns or perform lion dances during festivals and on big occasions. Wherever Chinese are, there is always a demand for paper crafts," he says