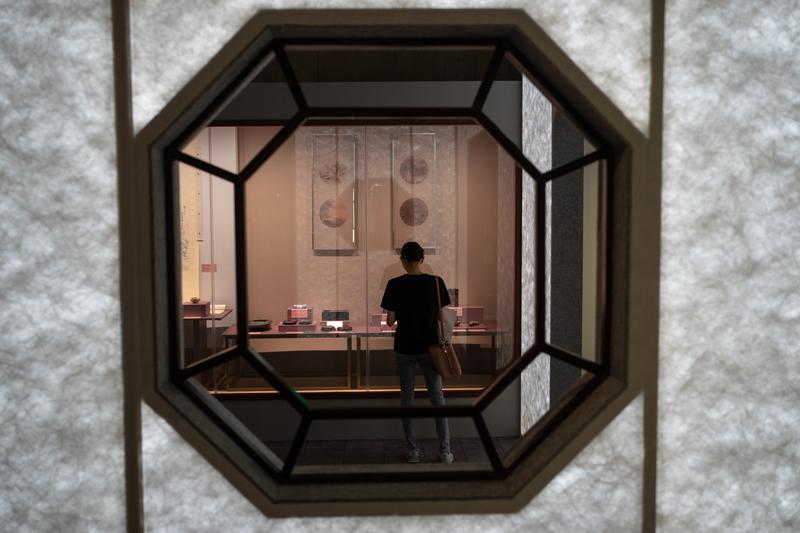 A visitor admires cultural relics at an exhibition showcasing the beauty of Chinese civilization in the Yangtze River Delta region at the Shanghai History Museum. (GAO ERQIANG / CHINA DAILY)

Two exhibitions at the Shanghai History Museum are showcasing the beauty of Chinese civilization in the Yangtze River Delta region since ancient times.

Life Aesthetics of Jiangnan and Green Gold: Maritime Tea Commerce Between China and Europe From the 17th to 19th Centuries both kicked off at the museum on July 28.

We decided to present the two exhibitions side by side so as to show the traditional everyday life of the region, while at the same time revealing the influence of its culture all over the world.

The exhibition on tea commerce, which features 145 cultural relics, was created by the China National Tea Museum in Hangzhou, Zhejiang province, and the Shanghai History Museum, with support from the China Maritime Museum.

Tea leaves were among the most important exports from China to Europe from the beginning of the 17th century until the 19th century. Presenting tea samples from shipwrecks, Chinese and Western tea sets and packages, as well as paintings depicting the tea trade with Western countries, the exhibition will run until Oct 30. Drinking tea has been an important part of everyday life in the Yangtze River Delta region, where a wide variety of tea species are produced and consumed.

"We decided to present the two exhibitions side by side so as to show the traditional everyday life of the region, while at the same time revealing the influence of its culture all over the world," says Zhou Qunhua, director of the Shanghai History Museum.

Cai Qin, deputy director of Zhejiang Provincial Museum, was curator of the first Jiangnan (the area south of the lower reaches of the Yangtze River) aesthetics exhibition in 2018, when she put together the lifestyle showcase for a cultural festival in Taipei and Taitung in Taiwan. The show went on tour of South Korea, Russia and Bulgaria before it arrived on the Chinese mainland.

The Yangtze River Delta, a key part of the Jiangnan area, has since the Song Dynasty (960-1279) been an important region due to its developed economy and cultural significance. The aesthetic value of Jiangnan art and craft has been largely reflected in the lifestyles of ancient Chinese literati, Cai says.

Among the highlights of the two exhibitions is a wine vessel, with qingbai ((bluish white) glaze, which dates to the 11th century. The pot is 27 centimeters tall and stands in a bowl that is shaped like a blossoming lotus of seven petals.

"People used to pour hot water in the bowl to keep the wine in the pot warm," says Lei Xiufo, deputy director of Anhui Museum.

The object was unearthed in a tomb in Susong county in Anhui province in 1963 and has since been one of the most popular ceramics on display at Anhui Museum.

"We agreed to bring this precious object to Shanghai because we wanted to show our support to Shanghai, where life is back to normal after the recent COVID-19 outbreak," he adds.