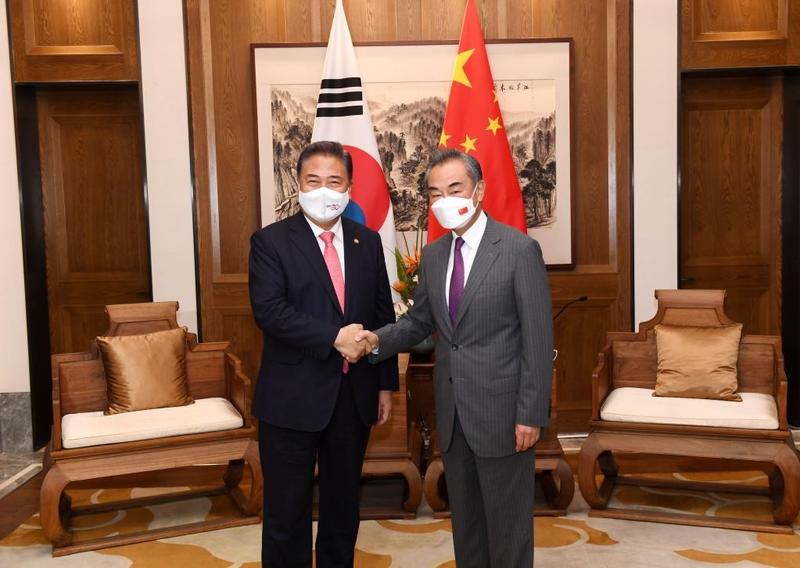 QINGDAO - Chinese State Councilor and Foreign Minister Wang Yi on Tuesday met with Park Jin, Minister of Foreign Affairs of the Republic of Korea, in Qingdao, east China's Shandong province, saying China is willing to promote the healthy and stable development of bilateral relations along with the ROK.

Chinese State Councilor and Foreign Minister Wang Yi on Tuesday had an in-depth exchange of views on the THAAD issue with Park Jin, Foreign Minister of the Republic of Korea, during their talks in Qingdao, east China's Shandong province

Wang said this year marks the 30th anniversary of the establishment of diplomatic relations between China and the ROK. The two countries have always been neighbors and partners, and the two sides should grasp the overall situation of the development and stability of bilateral relations.

Wang pointed out that the two countries should adhere to independence and freedom from external interference, adhere to good-neighborliness and friendship and take care of each other's major concerns, adhere to openness and win-win results and maintain stable and smooth production and supply chains, adhere to equality and respect and non-interference in each other's internal affairs, adhere to multilateralism and abide by the purposes and principles of the UN Charter.

China is willing to work with the ROK to adhere to the positioning of the strategic cooperative partnership between the two countries and promote the healthy and stable development of bilateral relations, Wang added.

Park Jin said the ROK is willing to, on the basis of the ROK-China strategic cooperative partnership, respect each other, promote equality and mutual benefit, enhance mutual trust, and carry out open and inclusive cooperation to make bilateral relations more mature and healthier.

Wang on Tuesday had an in-depth exchange of views on the THAAD issue with Park Jin during their talks.

The two sides expounded their respective positions, agreed that both sides should attach importance to each other's security concerns and strive to properly handle the THAAD issue to make sure that it will not become a stumbling block affecting the bilateral relations.

Wang also noted that as beneficiaries and builders of the global free trade regime, China and the ROK should resist this kind of behavior that violates market rules and jointly safeguard the security and stability of production and supply chains of the two countries and the world at large.

During the talks, the two sides agreed to accelerate the second-phase negotiation of the China-ROK free trade agreement to strive to reach consensus as soon as possible.

China and the ROK agreed to hold dialogue on maintaining the stability of production and supply chain, and to make the chain complete, safe, unblocked, open and inclusive.

Meanwhile, the two sides also agreed to stick to trade and investment liberalization, abide by WTO rules, and adhere to the principles of non-discrimination, non-exclusion, openness and transparency.