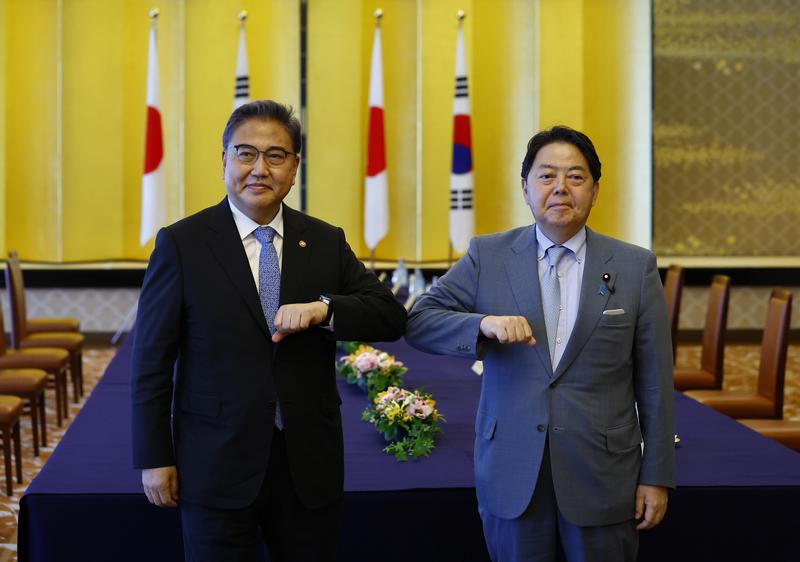 The Republic of Korea’s Foreign Minister Park Jin (left) and Japanese counterpart Yoshimasa Hayashi pose for a photo as they bump elbows to greet each other before their talks in Tokyo, July 18, 2022. (KIM KYUNG-HOON / POOL PHOTO VIA AP)

SEOUL – Republic of Korea Foreign Minister Park Jin met in Tokyo on Monday with his Japanese counterpart, carrying a message of reconciliation in hopes that the neighbors can overcome historical disputes and repair strained ties.

Relations have been fraught for years over the bitter legacy of Japan's occupation of Korea from 1910 to 1945. Disputes concern issues from wartime forced labor to export controls, but both nations have expressed interest in improving relations.

Relations have been fraught for years over the bitter legacy of Japan's occupation of Korea from 1910 to 1945. Disputes concern issues from wartime forced labor to export controls, but both nations have expressed interest in improving relations

Park told Japan's Foreign Minister Yoshimasa Hayashi that he would try to resolve the forced labor issue before a ruling on compensation payments, with both ministers agreeing to find a quick solution, the Japanese foreign ministry said in a statement.

Japanese officials say it is important to improve ties, but have looked to Seoul for proposals to resolve disputes including ROK court orders to seize assets of Japanese companies accused of not compensating some colonial-era laborers.

ROK's Supreme Court is expected to make a final decision on liquidating the assets in August or September, and Tokyo has warned of serious repercussions if the orders are enforced.

Park smiled as he bumped elbows at the meeting with Hayashi on his first trip to the Japanese capital since ROK's new President Yoon Suk-yeol took office in May.

Speaking to reporters in Seoul before flying to Tokyo, Park described his trip as "very meaningful". He said he would tell the Japanese side that Yoon had a strong will to improve ROK-Japan relations.

The meeting came against the backdrop of efforts by the United States to encourage both its key North Asian allies to mend ties and build co-operation on issues such as the Democratic People’s Republic of Korea's missile and nuclear programs.

The two foreign ministers said they would cooperate further in dealing with DPRK and agreed to accelerate bilateral dialogue in the wake of the Ukraine crisis, according to Japan's foreign ministry.

They agreed that the course of Japan-ROK, and Japan-ROK and US cooperation “has never been more critical," it added.

Hayashi and Park agreed to “resolutely respond to further North Korea provocations, while also keeping the door open for dialogue and promoting a flexible and open diplomatic approach," ROK's foreign ministry said in a statement. The DPRK is also referred to as North Korea.

ROK officials hoped the high-level visit would launch talks to secure a breakthrough in the disputes, despite concerns that the death of former Japanese premier Shinzo Abe could change Japan's policy priorities.

The trip aims at "turning on the tap" for serious talks on issues about forced labor, which stalled under Yoon's predecessor, a senior official handling Japan policy told Reuters last week.