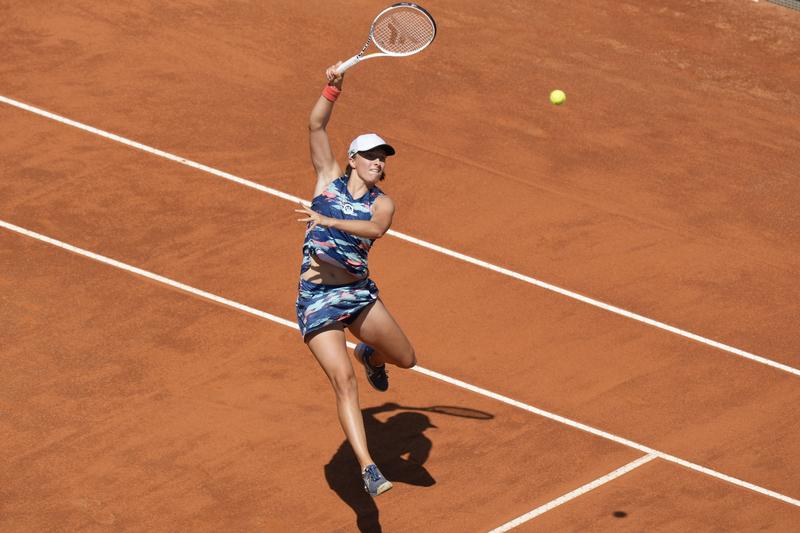 Iga Swiatek of Poland returns the ball to Victoria Azarenka of Belarus during their match at the Italian Open tennis tournament, in Rome, May 12, 2022. (ANDREW MEDICHINI / AP)

World number one Iga Swiatek extended her winning run to 26 matches with a 7-6(2) 6-0 victory over Bianca Andreescu in the quarter-finals of the Italian Open on Friday.

Swiatek, who has put together the longest winning run since Serena Williams racked up 27 straight victories during 2014 and 2015, will face Aryna Sabalenka in the semi-finals in Rome.

Swiatek, who has put together the longest winning run since Serena Williams racked up 27 straight victories during 2014 and 2015, will face Aryna Sabalenka in the semi-finals in Rome

The 2020 French Open champion is seeking her fifth title this season, having won on hard courts in Doha, Indian Wells, Miami and on clay in Stuttgart.

"I feel like every match I'm playing better and better," Swiatek told reporters. "Even though the first set was pretty tight, I had some ups and downs, I feel like I could play well in important moments and break back any time.

"I'm pretty happy that also the second set was more solid because it shows that I'm just, I don't know, learning my lessons throughout the whole match."

Trailing 5-3 and with Swiatek serving for the set, Andreescu broke to stay alive in the contest and forced it to a tiebreak, where the Canadian could not keep up with the top-ranked Pole.

Swiatek earned a quick double break to lead 3-0 in the second set, thanks to a series of electric baseline exchanges, before holding her serve and breaking Andreescu once again.

The Canadian clung on valiantly, saving two match points but her backhand found the net on a third as 20-year-old Swiatek wrapped up the match in one hour and 44 minutes.

Earlier, Belarusian Sabalenka recovered from a set down to notch her first win over Amanda Anisimova in her fifth attempt, beating the American 4-6 6-3 6-2.

Swiatek leads the overall head-to-head with Sabalenka 2-1, including both of their meetings this year in the Doha quarter-finals and Stuttgart final.

Ons Jabeur, who won in Madrid last week, fought back from the brink of defeat to advance with a 1-6 7-5 6-1 victory over Greek fourth seed Maria Sakkari.

The Tunisian was down 6-1 5-2 before she turned the match around to claim her 10th straight win and set up a last-four meeting with Daria Kasatkina.

Kasatkina was leading 6-4 3-2 when Switzerland's Jil Teichmann retired with an injury.