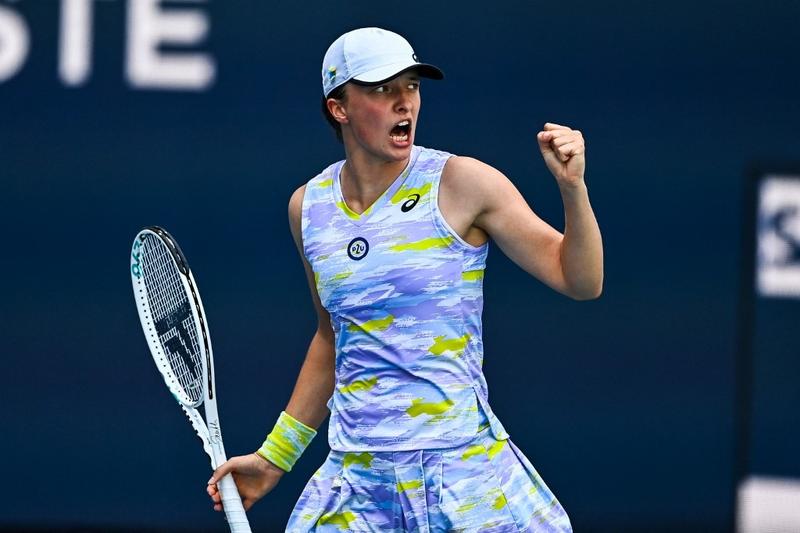 Swiatek, who put Poland up 2-0 on Friday by thrashing Mihaela Buzarnescu 6-1 6-0 for an 18th straight win, continued her sizzling form, as the 20-year-old broke Prisacariu six times in Radom, Poland.

Joining Poland in the finals will be the Czech Republic, Spain, Kazakhstan, Italy, Belgium, United States and Canada.

Joining Poland in the finals will be the Czech Republic, Spain, Kazakhstan, Italy, Belgium, United States and Canada

"I'm really proud. I was really working hard for that. Even though I didn't play last year, I feel it's been a long journey and it took us a few years to progress step by step and qualify for the finals," Swiatek said after her 6-0 6-0 victory.

Marketa Vondrousova and Karolina Muchova won the doubles decider for 11-time champions Czech Republic to clinch their finals berth with a 3-2 victory over Britain, beating Harriet Dart and Katie Swan 6-1 7-5 in Prague.

In singles play, Vondrousova, the 2019 French Open runner-up, earlier picked apart Britain's Emma Raducanu 6-1 6-1 as the teenager struggled with blisters on her right foot before Dart levelled the tie at 2-2 with a 6-0 5-7 6-2 win over 16-year-old Linda Fruhvirtova of the Czech Republic.

Kazakhstan progressed at the expense of Germany with Elena Rybakina coming from a set down to get past three-times Grand Slam champion Angelique Kerber 4-6 6-3 7-5 in Nur-Sultan in Kazakhstan.

ALSO READ: No toenails for Raducanu but Briton finding her feet on clay

Four-time winners Italy advanced after Camila Giorgi secured the decisive point in their victory over France in Sardinia with a 6-2 6-0 thrashing of Harmony Tan.

Spain will bid for a sixth title, despite missing Paula Badosa and Garbine Muguruza this weekend, after Sara Sorribes Tormo beat Arantxa Rus of the Netherlands 6-0 6-4 to secure their passage to the finals.

The United States squeezed through to the finals with a 3-2 home victory over Ukraine in Asheville, North Carolina, but only after receiving a mighty scare by the visitors from the conflict-torn nation.

Underdogs Dayana Yastremska and Katarina Zavatska won their respective singles matches in straight sets on Saturday but the United States ultimately prevailed in the doubles decider, won 7-6(5) 6-3 by Jessica Pegula and Asia Muhammad over Yastremska and Lyudmyla Kichenok.

In Vancouver, Canada confirmed their place in the finals by beating Latvia.

US Open runner-up Leylah Fernandez won her Saturday singles over Daniela Vismane 6-2 6-1 to give the hosts an unassailable lead.

Belgium had an easy route to the finals, receiving a walkover with opponents Belarus being suspended from international team competitions following the conflict in Ukraine.