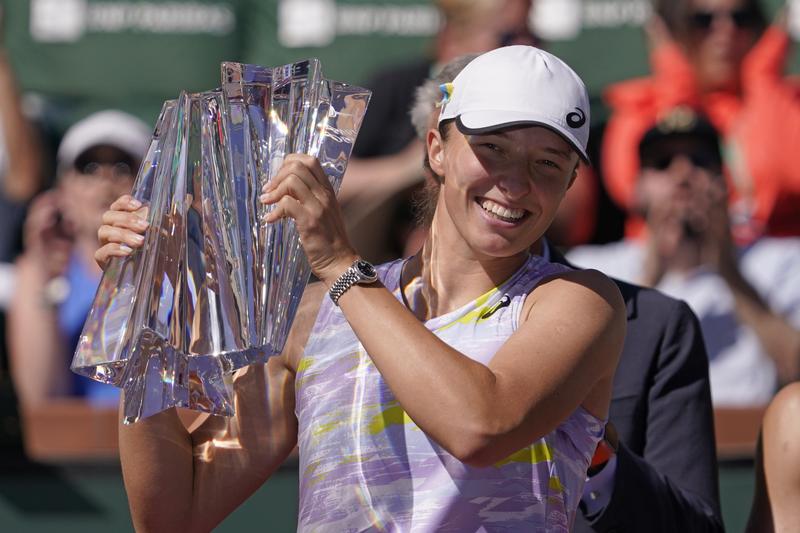 Poland's Iga Swiatek blew away Greece's Maria Sakkari 6-4 6-1 to win a windswept Indian Wells final on Sunday and move up to No 2 in the world rankings.

Another windy day in the California desert made life miserable for both players, the gusts contributing to an uneven contest littered with nine breaks of serve.

Iga Swiatek claimed six of those breaks including two in a one-sided second set, clinching a second consecutive WTA 1000 title with a thundering forehand winner

The 20-year-old Swiatek claimed six of those breaks including two in a one-sided second set, clinching a second consecutive WTA 1000 title with a thundering forehand winner.

The title is the fifth of 2020 French Open champion Swiatek's career.

"It's pretty crazy because I wasn't expecting to be in that place (final) especially after playing so well in the previous tournament; I didn't know it was possible for me to play that well for that long," said Swiatek, winner of the WTA 1000 event in Doha in February. "It was a different match, for sure, because of the conditions.

"You always want to see the best final that's possible, but in these conditions it was pretty hard to, as I said, play tactically as I wanted, so in the end I was just focusing on playing in."

After losing her first three meetings with the Greek, Swiatek has now come out on top in the last two, with Sunday's victory extending her WTA match-win streak to 11.

Sakkari earned a spot in the final by dispatching defending champion Paula Badosa but had no answers for the windy conditions and a focused Swiatek.

With the win Swiatek will wake up on Monday as the new world No 2 and while she said that seems surreal she is already targeting Ash Barty and No 1.

"Right now it's too surreal to describe it, honestly," said Swiatek. "But for sure I want to go higher because I feel like getting the No 1 is closer and closer.

"For sure, Ash is one of the players that I want to look at."

Despite the loss, Sakkari will jump to No 3 in the world rankings on Monday, matching Stefanos Tsitsipas for the highest position achieved by a Greek player.

The final got off to a scrappy start with four straight breaks of serve but Swiatek got to grips with the tricky conditions first, holding to go 3-2 up and breaking Sakkari to take a one-set lead.

Sakkari never settled into the contest. She held serve to start the second set but after that it was one-way traffic as Swiatek swept five consecutive games.

"Obviously it wasn't my day," said Sakkari. "There's not much I can say about the way I played.

"Clearly it was windy. We were both struggling with our serves in the beginning of the match. (But the) wind is never an excuse because wind is for both of us."