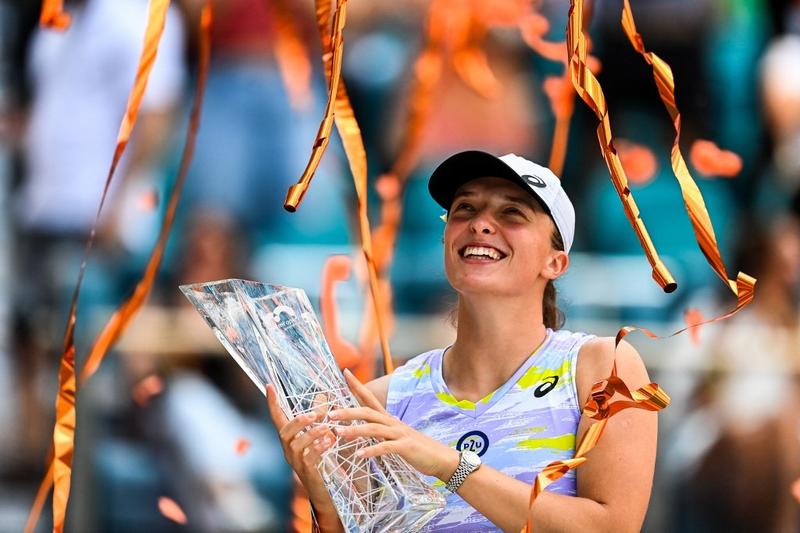 Poland's Iga Swiatek poses with her trophy after winning the women’s single finals at the 2022 Miami Open presented by Itaú at Hard Rock Stadium in Miami Gardens, Florida, on April 2, 2022. (CHANDAN KHANNA / AFP)

Poland's Iga Swiatek will take over the world number one ranking in style as she kept her remarkable winning run intact with a 6-4 6-0 win over Japan's Naomi Osaka in the Miami Open final on Saturday.

The Polish second seed, who will take over the world number one ranking next week, did not drop a set in Miami and has now won 17 consecutive matches dating back to her championship run at the Qatar Open in February.

Swiatek, who will take over the world number one ranking next week, did not drop a set in Miami and has now won 17 consecutive matches dating back to her championship run at the Qatar Open in February

With the victory, the 20-year-old Swiatek becomes only the fourth woman to win the Indian Wells and Miami tournaments back-to-back, a feat known as the "Sunshine Double" given the tournaments' respective locations in California and Florida.

"These weeks were so intense I didn't really know if I would able to keep up with the streak that I have," said Swiatek, who also became the first woman to win the opening three WTA 1000 tournaments in a season.

"It's amazing for me that I could show mental toughness because my whole life I thought I could do more and sometimes I was losing and I didn't even know why.

"This season I feel like everything clicked so it's great and I am really happy."

The two players wasted no time getting into the heat of the battle as the match began with a wild seven-deuce opening game during which four-time Grand Slam champion Osaka saved two break points and fired down four aces to hold serve. 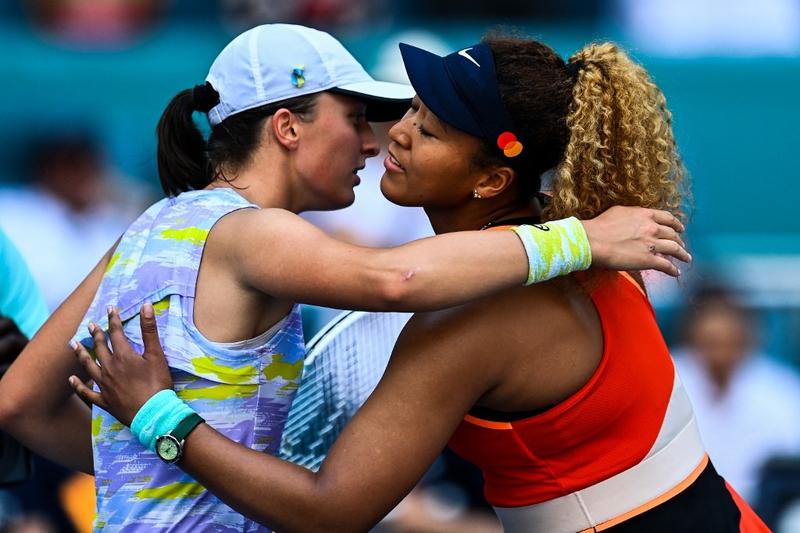 The match remained on serve until Swiatek broke Osaka when she ripped a brilliant crosscourt backhand winner to go ahead 3-2 and then went on to close out the first set without facing a break point despite serving under 40 percent.

The former French Open champion raised her level in the second where she broke Osaka three times to race out to a 5-0 lead and never looked back as she sealed the 79-minute match on her first championship point when Osaka sent a forehand wide.

Swiatek is the first women to complete the "Sunshine Double" since Victoria Azarenka in 2016. Kim Clijsters (2005) and Steffi Graf (1994, 1996) are the other women to accomplish the feat.

Osaka arrived in Florida following a second-round loss at Indian Wells where she was reduced to tears after being heckled during the match but she proved resilient as she would only drop one set en route to the Miami final.

In the final, Osaka did well to hold serve in a tricky 10-minute game to start the match and while she was not able to do much against a determined Swiatek after that she still held her head high.

"I haven't been in this position for a little minute," said the 24-year-old Osaka, who took a break from the sport last year to prioritize her mental health.

READ MORE: Osaka at peace with herself ahead of Indian Wells tournament

"I know this isn't the outcome that you guys wanted but I am having a lot of fun out here so I hope that I can keep working hard and get more opportunities to be in a situation like this again."

Swiatek will take over the top ranking from Ash Barty, who stunned the sporting world last month when she announced her retirement from tennis aged 25.