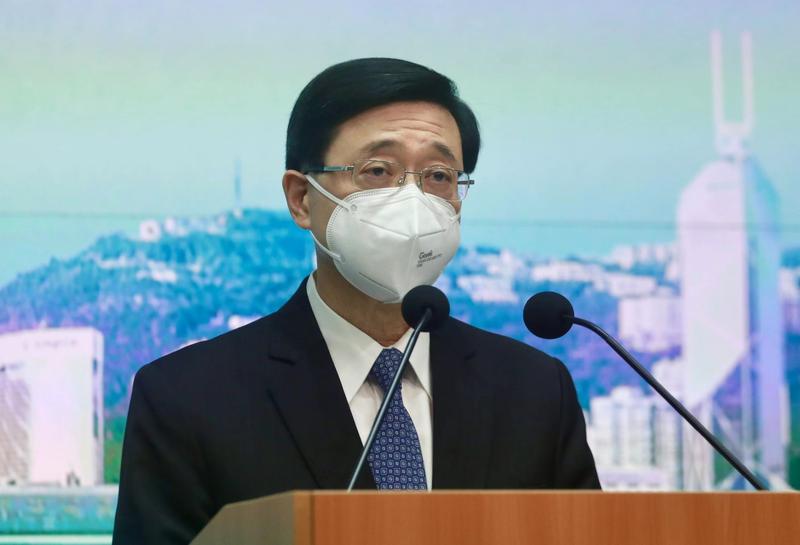 John Lee Ka-chiu meets the press in Hong Kong on April 6, 2022 after tendering his resignation earlier in the day to pave the way for a run in next month's chief executive election. (PROVIDED TO CHINA DAILY)

Chief Secretary for Administration John Lee Ka-chiu announced his intention on Wednesday to run for the upcoming Hong Kong chief executive election scheduled for May 8 after tendering his resignation the same day.

Meeting the press at the HKSAR government headquarters, Lee said it has been a glory for him to serve the people of Hong Kong for more than 40 years, and he will inform the public of his next move once his resignation has been approved by the central government.

John Lee said it has been a glory to serve the people of Hong Kong for over 40 years, and he will inform the public of his next move once he had obtained approval for his resignation from the central government

He thanked current Chief Executive Carrie Lam Cheng Yuet-ngor for appointing him as secretary for security in 2017 and chief secretary last year.

Lee also expressed his gratitude to civil servants, the politically-appointed team, organizations and groups with whom he had worked. He will go on leave with immediate effect.

Lee, 64, joined the city’s police force in 1977 as a probationary inspector and became deputy police commissioner in 2010. He was appointed secretary for security in 2017 and promoted to chief secretary in June 2021. Lee had held various posts in the police force, including assistant commissioner (crime) and director of crime and security, and deputy commissioner (management).

Lam said on Wednesday she had received Lee’s resignation and submitted it to the central government in accordance with Article 48(5) of the Basic Law.

Nominations for the chief executive race began on Sunday and will end on April 16. Candidates aspiring to contest the city’s top job have to submit their applications personally to returning officers before 5 pm on April 14 as April 15 and 16 fall on public holidays.

The upcoming chief executive election will be the first CE election to be held after the special administrative region revamped its electoral system to ensure that the city’s governing power is reserved for patriots only.

Lo Man-tuen, vice-chairman of the All-China Federation of Returned Overseas Chinese and also a member of the Election Committee, said Hong Kong needs a tough leader to steer the city through tense Sino-United States relations.

He said Lee is suited for the top job as he’s a “man of the people”, tough-minded and has a good performance record.

Jeffrey Lam Kin-fung, also an Election Committee member and legislator, said Lee, as chief secretary for administration, is familiar with the government’s operations.

Describing Lee as fit to be Hong Kong’s leader, he said Lee is accountable and can rise to the challenges. Lee has shown leadership in dealing with the social unrest in 2019, in safeguarding national security, and in handling the CVOID-19 pandemic situation, he added.

Jeffrey Lam said Lee, with a decisive trait, is what the SAR needs for its leader. He hoped that the next administration can unite the community to revive the local economy and retain talents, while strengthening efforts to safeguard national security, and in solving deep-rooted issues like housing, care for the elderly and medical services.