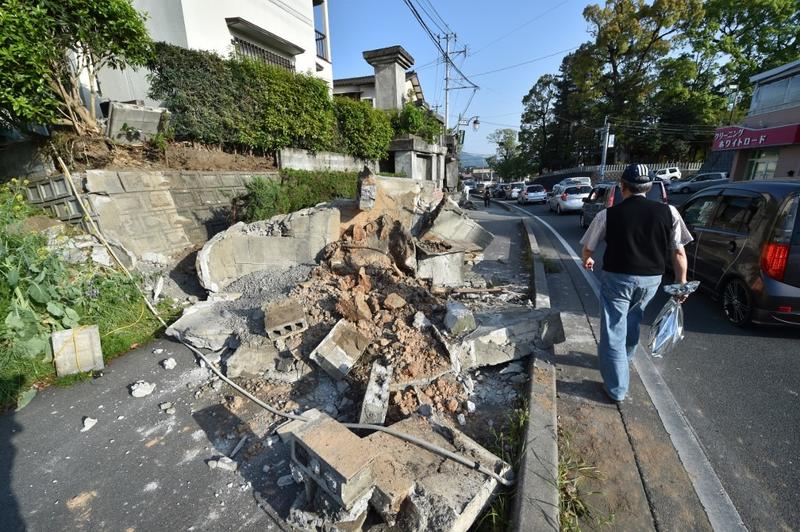 A man walks next to a sidewalk covered by rubble in Mashiki, Kumamoto prefecture on April 15, 2016, after a 6.5-magnitude quake struck the southwestern island of Kyushu. (KAZUHIRO NOGI / AFP)

MANILA / TOKYO - An earthquake with a magnitude of 6.6 jolted southwestern Japan early on Saturday morning, injuring 13 people, the authorities and local media said.

No tsunami warning was issued after the quake struck with an epicenter 45 km deep at 1:08 am off the coast of Kyushu, the southernmost of Japan's four main islands, the Japan Meteorological Agency said.

The quake caused shaking in Oita and Miyazaki prefectures that measured 5+ on Japan's seismic intensity scale, which has a maximum of 7, the Japan Meteorological Agency said

The quake caused shaking in Oita and Miyazaki prefectures that measured 5+ on Japan's seismic intensity scale, which has a maximum of 7, the agency said.

Thirteen people were injured in nearby regions, including two people in their 80s who were seriously hurt, the Yomiuri newspaper reported, citing local authorities.

"In the past, 10 percent to 20 percent of strong earthquakes were followed by a quake of the same level, so be aware of another quake of up to 5+ intensity scale in regions that experienced large jolts, for around a week," the JMA said in a statement.

Also on Saturday, the Philippine Institute of Volcanology and Seismology said an offshore earthquake with a preliminary magnitude of 6.5 struck Davao Occidental province in the southern Philippines at 10:26 am local time.

The institute said the quake hit at a depth of 66 km, about 234 km southeast of Balut Island in Sarangani town.

The institute said the tectonic quake will trigger aftershocks and cause damage, but added that the quake did not pose a tsunami threat.

The Philippines has frequent seismic activity due to its location along the Pacific "Ring of Fire".