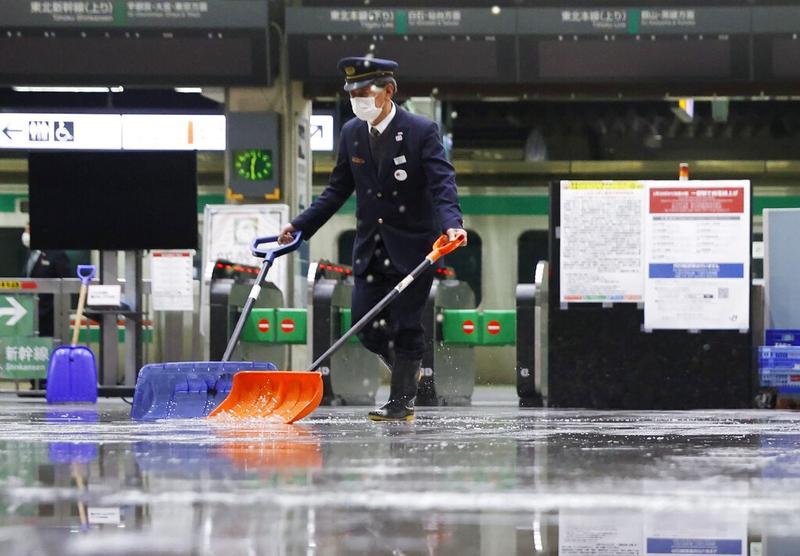 A worker scoops out water inside Fukushima station in Fukushima, northeastern Japan, on Feb 14, 2021, following an earthquake on Feb 13. (JUN HIRATA / KYODO NEWS VIA AP)

IWAKI - The stench of alcohol filled the small bar on Sunday as Aoi Hoshino swept up glass from whiskey bottles smashed in a strong earthquake the night before, one appearing to be an aftershock from a devastating quake that hit the Fukushima area in 2011.

The 7.3-magnitude quake struck shortly before midnight Saturday and cracked walls, shattered windows and set off a landslide in Fukushima, the area closest to the epicenter. More than 100 people were injured.

The Japan Meteorological Agency said the quake was believed to be an aftershock from the magnitude-9.0 earthquake on March 11, 2011

Hoshino, 46, swept broken glass from some 20 shattered whiskey bottles into a garbage bag in her bar on a back street in the city of Iwaki, roughly 200 kilometers north of Tokyo and not far from the quake’s epicenter.

“We were hit by this coronavirus pandemic, and so we were looking forward to reopening our shops, and now this happens,” she said, referring to a locally declared state of emergency that had closed her bar from January and was set to lift on Monday.

“It’s just one thing after another.”

The Japan Meteorological Agency said the quake was believed to be an aftershock from the magnitude 9.0 quake on March 11, 2011 that set off a tsunami, killing nearly 20,000 people along a wide swath of northeastern Japan, and the Fukushima nuclear accident, the world’s worst in 25 years. The agency warned of aftershocks for several days. 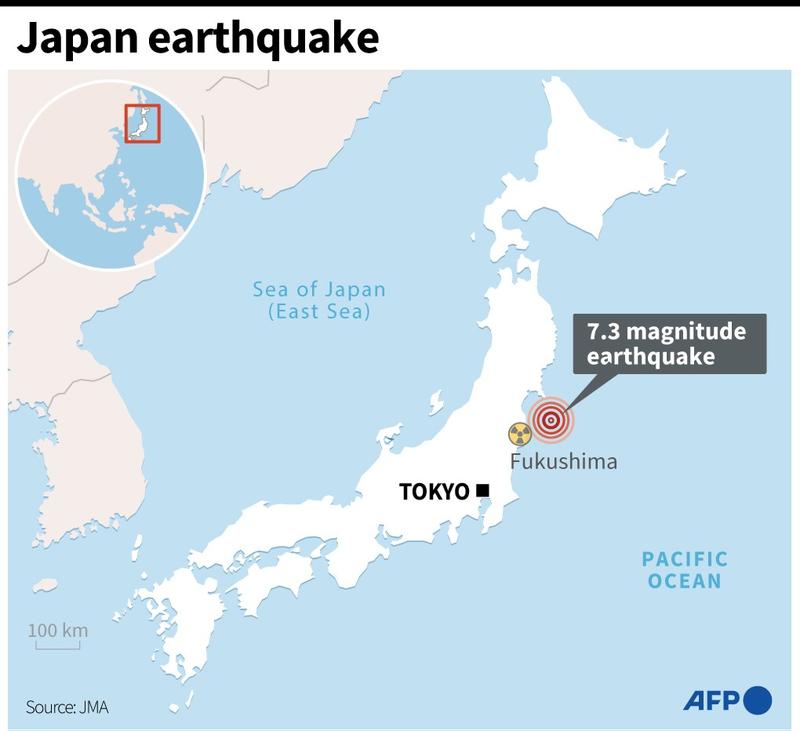 “My body immediately reacted, and I couldn’t stop trembling. My legs were shaking too, but I couldn’t gauge whether it was safer to run out or stay in, so I ended up doing a weird little dance,” she said with a chuckle.

At least 146 people got injured but no deaths were reported, according to public broadcaster NHK

At least 146 people got injured but no deaths were reported, according to public broadcaster NHK.

The 11:08 pm (1408 GMT) quake shook buildings in the Japanese capital Tokyo, cutting power to hundreds of thousands of buildings across eastern and northeastern Japan. By morning, though, power was restored to virtually all.

Several thousand households remained without water, forcing residents to line up with plastic jugs to receive water from trucks.

Though much of Iwaki appeared as usual, tiles had fallen from the front of at least one building, and the sound of broken glass being swept up echoed from several shops and restaurants.

On the wall of Noboru Endo’s hair salon a hairline crack had opened, in the same place a wider one opened 10 years ago, but otherwise there was little damage.

Endo, 64, said Saturday’s quake did not compare to the one a decade ago, which went on for several minutes and had weeks of frequent aftershocks.

“We’ve all pretty much gone back to life as usual, save a few areas that are still badly affected,” he said of reconstruction efforts in the area. 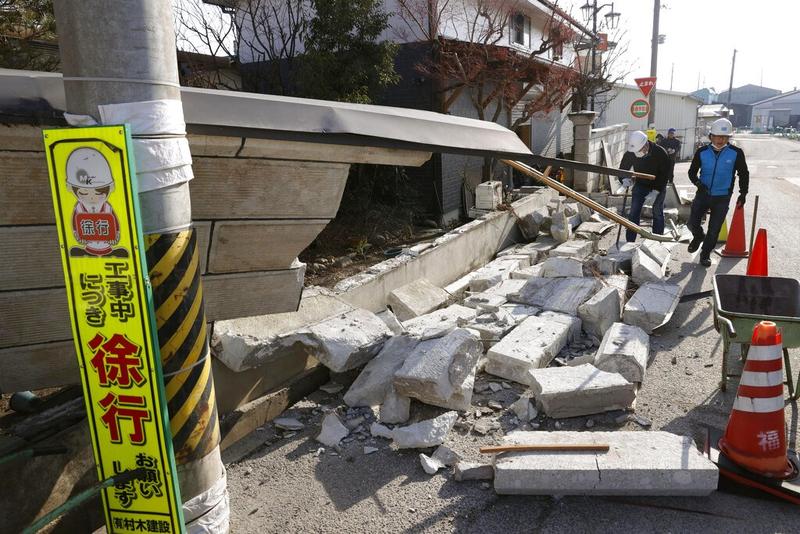 Men help clean debris after the wall of a house collapsed in Kunimi town, north of Fukushima city, northeastern Japan, on Feb 14, 2021, following an earthquake on Feb 13. (JUN HIRATA / KYODO NEWS VIA AP)

There was no tsunami this time, and no reports of irregularities at any nuclear plants. NHK reported that about 160 millilitres (5 ounces) of water had leaked from a spent fuel pool at the Fukushima Dai-Ni reactor but that this presented no danger.

Shinkansen bullet train service to much of northern Japan was suspended due to damage along the tracks. Service along one line was not expected to be restored until at least Tuesday.

Beermakers such as Asahi Group Holdings and Kirin Holdings, which have factories in Fukushima and Sendai, said they were assessing the impact on their facilities. Kirin said its Sendai plant sustained light damage and it was still checking the situation.

The power outages did not affect any of the Pfizer Inc COVID-19 vaccines that arrived on Friday for inoculations that are to start this week, said Chief Cabinet Secretary Katsunobu Kato. 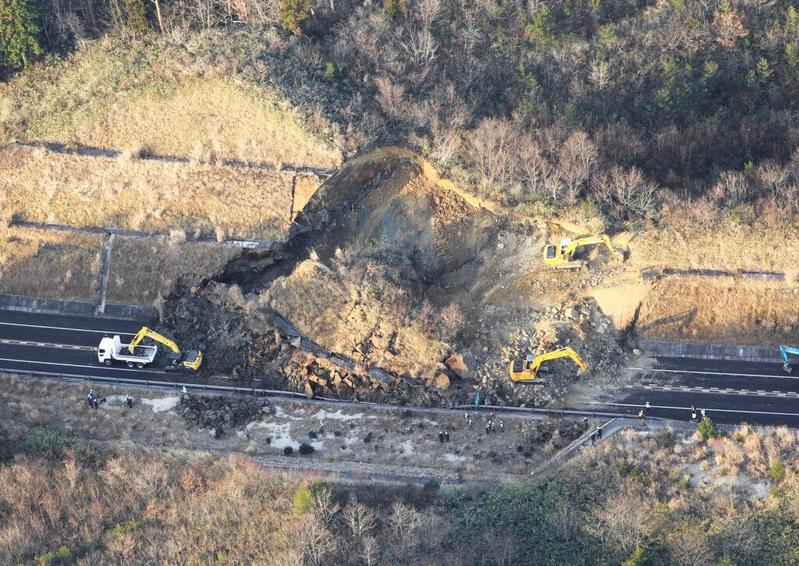 A portion of a highway is blocked by a landslide after an earthquake hit the city, in Soma, Fukushima prefecture, northeastern Japan, Feb 14, 2021. (HIRONORI ASAKAWA / KYODO NEWS VIA AP)

The quake revived memories of the 2011 monster quake, which devastated a wide swath of the Pacific coastline and killed nearly 20,000.