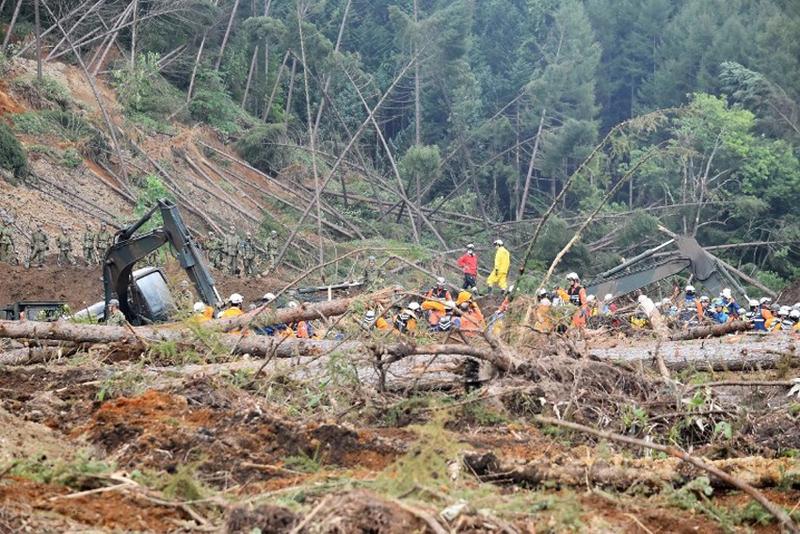 In this Sept 9, 2018 photo, members of Japan's Self-Defense Force search for missing people in the devastated city of Atsuma three days after a 6.7-magnitude earthquake hit the northern Japanese island of Hokkaido. (JIJI PRESS / AFP)

There are now no reports of individuals missing. The search operations have officially been called off.

It is extremely tough, but if rolling blackouts or another power outage occurs, restoring lives and business activities to normal will be severely impacted.

According to the local police and prefectural officials, the body of a 77-year-old man who was previously unaccounted for was found on Monday morning in the town of Atsuma at the site of a deadly landslide. Two other bodies were found at the same site on Sunday, officials reported.

The majority of the fatalities were in Atsuma, where massive landslides buried and crushed homes, leaving around 36 people dead, public broadcaster NHK reported on Monday.

As of Monday morning, around 2,700 people remained at evacuation shelters, with around 70 buildings destroyed and 8,000 homes still without water supply, according to the Hokkaido prefectural government.

Hokkaido Governor Harumi Takahashi sought cooperation from people and businesses in Hokkaido in using less power, as consumption must be reduced by 20 percent at peak-times to avoid blackouts in Japan's northernmost prefecture.

"It is extremely tough, but if rolling blackouts or another power outage occurs, restoring lives and business activities to normal will be severely impacted," Takahashi was quoted as saying.

The electricity shortage could continue for up to a week according to Hokkaido Electric Power Co, as the Tomatoatsuma thermal power plant, which was damaged by the quake and produces nearly 50 percent of Hokkaido's power, underwent repairs.

Hokkaido was rocked by an early morning 6.7-magnitude earthquake last Thursday. Around 700 people have been injured as a result of the quake which was measured the maximum 7 on Japan's seismic intensity scale.

This marked the first time a quake in Hokkaido has registered this intensity level since the seismic scale was revised in 1996, Japan's weather agency said.