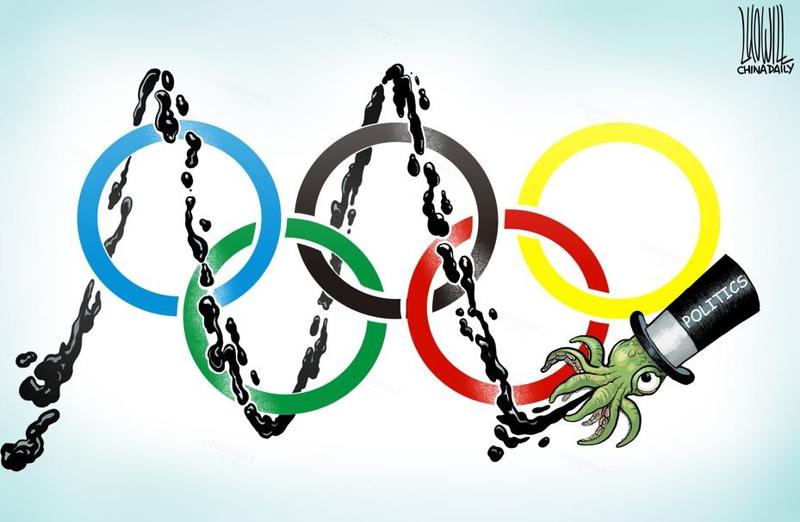 BEIJING – Based on the groundless allegations once again targeting China's Xinjiang, the White House has reportedly confirmed that it will stage a "diplomatic boycott" of the Beijing Winter Olympics.

Washington's latest attempt to politicize the forthcoming global sports event runs counter to the Olympic spirit that intends to unite rather than divide. This blatant political provocation will also risk damaging Sino-US relations, one of the world's most important bilateral relationships that stands at a crucial crossroads.

Given that no US officials had been invited to attend the Beijing Winter Olympics, the so-called diplomatic boycott is no more than a self-invented and politically convenient excuse for Washington.

READ MORE: China to hit back at US' 'diplomatic boycott' of Games

Such a move, based on lies and political hostility, will not stand in the way of the Olympic Games but only be remembered as a move by some politicians who put their self-interests before the pursuit of peace and unity of humanity.

By launching a "diplomatic boycott" of the Olympic Games, the US is using Xinjiang-related issues to sow discord among various ethnic groups in China

It is a long-held consensus of the international sports community that boycotts are "the most ominous ghost in the Olympic movement."

At a time when unity is needed above all else, such a boycott will not only cripple and disrupt global solidarity but also serve as a fatuous gesture. It will ultimately hurt the interests of the athletes who are expected to be the real protagonists of the Games.

It is not the first time that the United States has targeted Xinjiang, an autonomous region covering about one-sixth of China's landmass, with fabricated accusations of "forced labor" or "genocide." By spreading fallacies and turning a blind eye to the progress in the world's second-largest economy, the United States weaponizes human rights with a political motive.

By launching a "diplomatic boycott" of the Olympic Games, the US is using Xinjiang-related issues to sow discord among various ethnic groups in China.

It was with the goal of fostering peace, brotherhood and fair athletic competition that the creators of the modern Olympics founded the Games. Any attempt to use the Olympics as a place to advance political agendas is in violation of the Olympic Charter.

A successful Games should be one where athletes, not politicians or news organizations, take center stage. The US "diplomatic boycott" will do nothing but hurt the interests of its own athletes.

It should also be noted that the International Olympic Committee approved adding the word "together" into the Olympic motto in July this year, which makes the new Olympic motto read "Faster, Higher, Stronger – Together."

The renewed motto serves as a reminder that any boycott undoubtedly runs counter to the consensus of the international community.