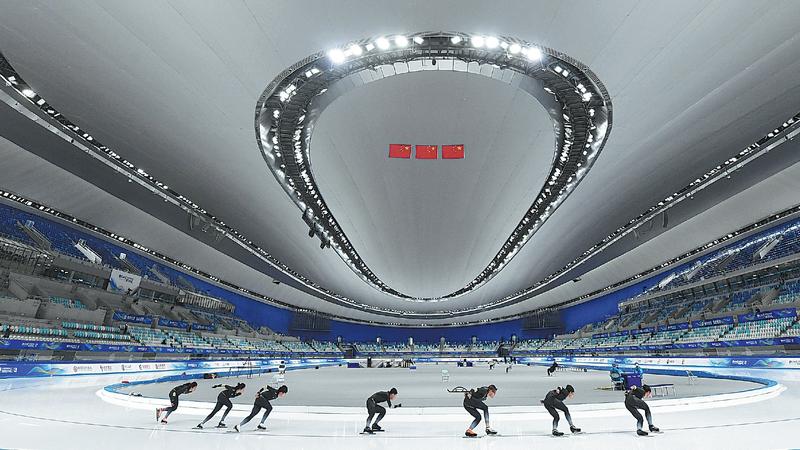 China on Wednesday slammed some politicians in the United States who have tried to smear China on the pretext of the so-called human rights issue and attempted to disrupt, hinder and sabotage the preparation and holding of the 2022 Beijing Winter Olympics.

"China expresses its strong dissatisfaction and firm opposition. Some US individuals' remarks are full of lies and disinformation. They are a typical US farce and are doomed to fail," Zhao Lijian, spokesman of the Chinese Foreign Ministry, said at a news conference in Beijing.

"Some people in the US praise themselves as so-called moral authorities. I wonder where the courage of such ignorant people comes from," he said, noting that racism is a four-century-old scar in the US and it is still festering and bleeding.

His comments came after US House of Representatives Speaker Nancy Pelosi on Tuesday called for a US diplomatic boycott of the Winter Olympics in Beijing, criticizing China on human rights.

At a hearing in Washington, Pelosi, a Democrat, said global leaders who attend the Games in Beijing would lose their "moral authority".

Some people in the US praise themselves as so-called moral authorities. I wonder where the courage of such ignorant people comes from.

On Tuesday, a spokesman for the Chinese embassy in Washington also said the US attempts to interfere in China's domestic affairs over the Games are doomed to fail.

"On human rights issues, they are in no position, either historically or currently, to make wanton groundless criticism against China," Liu Pengyu said.

A senior US government official, in commenting on Pelosi's remarks, said the position of US President Joe Biden's administration on the 2022 Olympics had not changed, echoing remarks by White House press secretary Jen Psaki early last month that "we have not discussed and are not discussing any joint boycott with allies and partners".

In a written statement to the US congressional hearing, Sarah Hirshland, the chief of the United States Olympic and Paralympic Committee, said the Congress should learn from historical lessons and not consider "another boycott".

"Past Olympic boycotts have failed to achieve political ends－and they should give all of us pause in considering another boycott," she said.

The choice of whether to boycott would ultimately be up to the US Games committee, but political pressure could weigh heavily, The Associated Press reported.

Proponents of US participation in Beijing's Olympics say it would be unfair to punish athletes, and the Games would provide a platform for the US, which has one of the highest Winter Olympic medal counts, to show its vitality on the global stage.

In the two-page statement dated on Wednesday, Hirshland said boycotting the Games only punishes athletes. She appealed to Congress to give a chance to the new generation of Winter Olympians who are working hard to represent the US next year in Beijing.

"Please give them that chance," she said in the statement. "They do not deserve to train for the Games under a cloud of uncertainty about American participation in the Games."

Charles Freeman, a former US State Department official who served as a chief US interpreter during then-US president Richard Nixon's 1972 visit to China, recalled that little was accomplished when Washington and Moscow boycotted Olympics when each was a host in the 1980s. Instead, engagement is a smarter path, he said.

"The lesson is that sports can bring people together," Freeman was quoted by sports website The Athletic as saying on April 15. "And that politicizing sports by preventing people from competing, generally, not only doesn't work, but it's counterproductive."

The majority of the US public does not side with those calling to boycott the 2022 Olympics, according to a recent poll by Morning Consult, a US company that provides data-focused observations on politics and business issues.

Sixty-four percent of US adults said they did not back calls to skip the Winter Games, with 27 percent offering no support "at all", according to the poll, which was published on April 27.

Zhao Huanxin in Washington and agencies contributed to this story.