Building up a better community

Removing barriers and improving the environment brings people closer to each other and nature, Fang Aiqing reports. 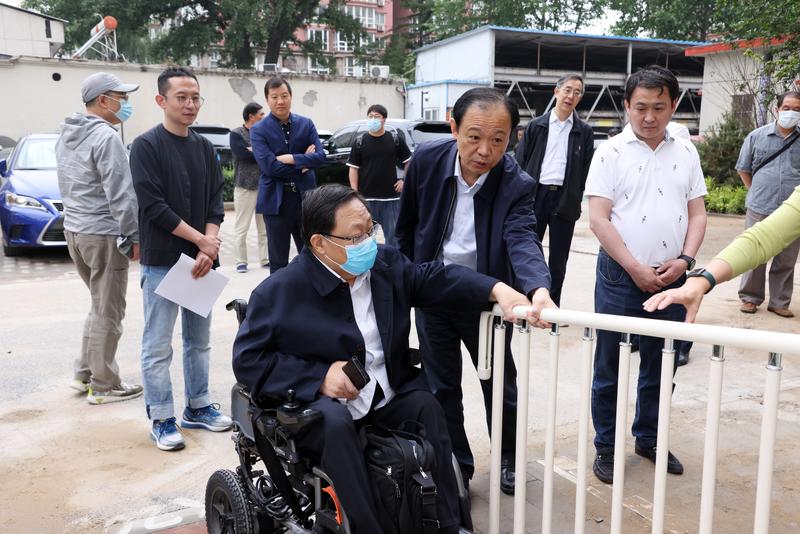 A good structure is one that people think is both convenient and considerate for users, architect Xue Feng says.

As chief architect of Beijing-based China Construction Engineering Design and Research Institute Corp, Xue has been exploring construction and renovation of barrier-free facilities for the past eight years.

One of their recent works is part of a micro-space regeneration project launched by the Beijing city government involving eight old neighborhoods. The project was completed earlier this year.

Key focuses of this project include making better use of small patches of deserted land in the city and improving the quality of public spaces.

The Min'an community in Dongcheng district, constructed in 2003, is located at the northeastern corner of the Second Ring Road, not far from Dongzhimen subway station.

Its southern area has a U-shaped building with more than 700 households, enclosing a broad open space that, due to a tall building on its southern elevation, gets little direct sunlight.

Elderly people make up around 40 percent of the residents. In the past, the undeveloped land made it difficult for them to kill time within their own community. 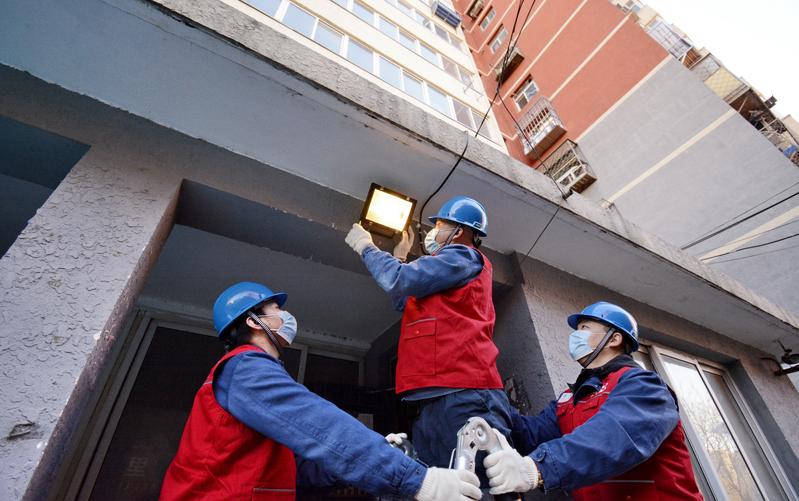 Technicians install lights for a residential unit at Caiyuan Beili community in Beijing's Xicheng district on Wednesday as part of a project to refurbish residential communities. (LI XIN / XINHUA)

As the number of cars increased, the once open space was packed, and the situation got worse when people parked bicycles and electric motorcycles in a haphazard manner.

To improve the situation, the group of architects replanned the distribution of functional spaces.

They built a two-story high platform to take greater advantage of natural sunlight so that people could choose to stay outside longer. They also set up clothes lines for people without a balcony at home to hang up and dry large sheets.

A ramp enables wheelchair users to get onto the platform so they may linger and enjoy the sunlight. Elderly people can have a stroll on the platform where up and down slopes and steps of different heights are deliberately placed to enrich the experience.

Taking advantage of the height differences, there are abundant benches for resting. These are made of wood-like materials so they will not be too cold to sit on in winter.

The platform is also where children can safely enjoy themselves, and there is a slide attached to it. 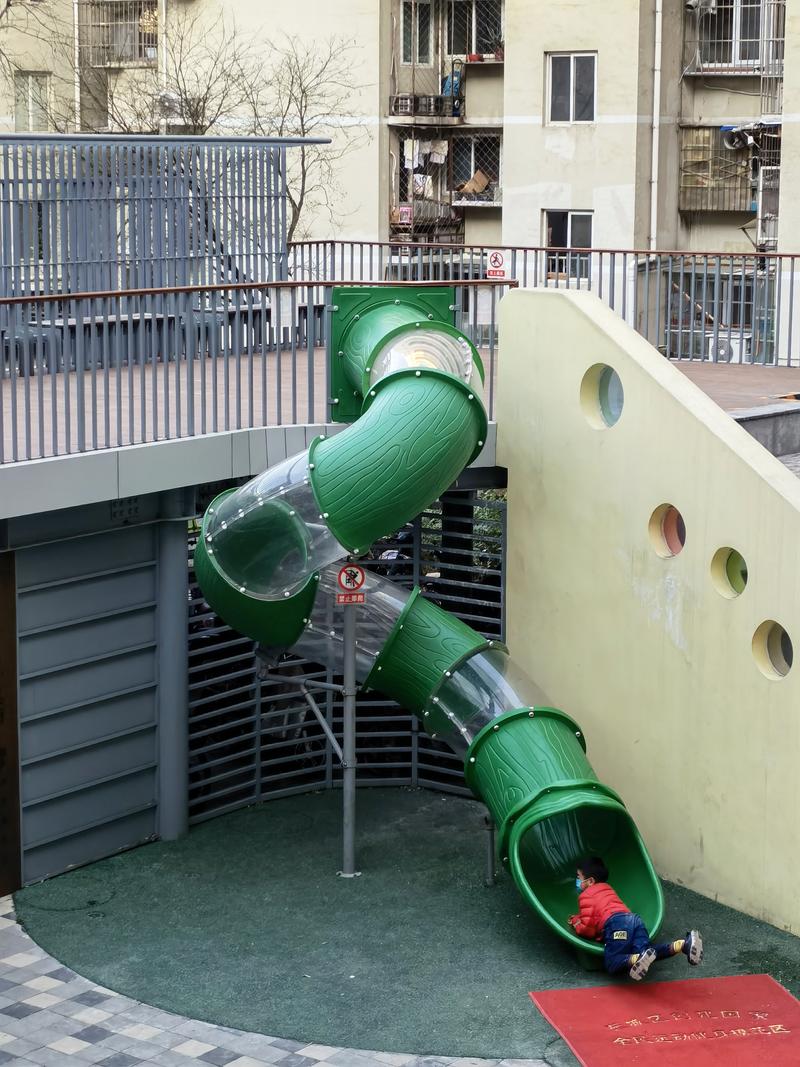 Part of the downstairs space has been turned into a lounge with seats and a dinner table, and as it gets cold in winter, wind shields have been put in place. The other part remains a shed for bicycles and electric motorcycles, fully equipped with charging facilities.

In front of each residential unit they installed handrails of two different heights, suitable for adults, children and wheelchair users, and a slight incline instead of steps to keep the entrances safe from vehicles while providing assistance.

Along the way from the gate of the neighborhood to the platform are some simple physical exercise facilities. Household garbage and construction waste is collected in designated places.

In an interview with Beijing TV in December 2019 when potential participants of the regeneration project visited the neighborhoods, Li Zhen, lecturer at the Central Academy of Fine Arts in Beijing, said the residents were quite curious whether or not the trees and some other old stuff in the yard would be removed, or how the designers could keep them and let them play a bigger role.

It turns out the trees were preserved. 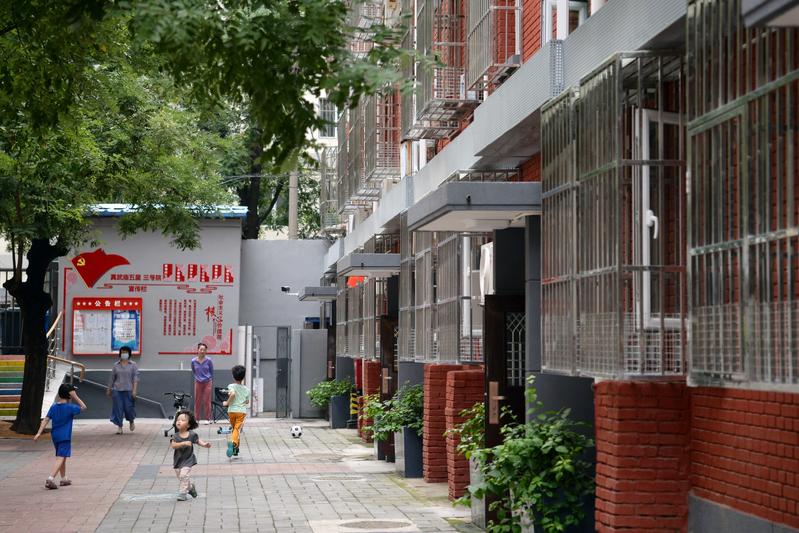 Residents and children at a newly renovated community in Yuetan subdistrict in Beijing's Xicheng district, in August. (WEI TONG / FOR CHINA DAILY)

Xue hopes it's an interesting place for people to commune with nature, and one that has enough diversity for people to choose how they would like to have fun there.

"We didn't expand the space, but just used it more efficiently by making the once messy space usable," he says, adding that there are lots of similar obscure corners in old neighborhoods that have the potential to be better utilized.

And most importantly, the transformation－simple, plain but functional－doesn't cost much.

Back in the 1980s, during his college years, Xue was often told to pay respect to nature, cultural history and the people. Therefore, he thinks that what he does as part of the regeneration project is retrospective to the essential value of architecture rather than an evolution.

"The value of architecture counts only if the users like it, not the architect," he says.

And architects today are also seeking a sense of self-value in the process of creating a more humanized community environment that can help people preserve the subtle memory and atmosphere of life, as well as designing large buildings, according to Xue.

As barrier-free facilities increasingly turn up in communities in Beijing, people's understanding of the infrastructure has been transformed.

Just these tiny changes in outdoor spaces have made them realize the facilities are for everyone－the elderly, pregnant or physically challenged, and children.

Compared to the previous regulation, the new version broadens the scope of use, from special care for people with physical challenges to encompass the welfare of all members of society, meanwhile also promoting new technology support to bridge the digital gap and reinforcing social services in the field.

The regulation pays special attention to the needs of people with disabilities and the elderly, especially as the latter will account for one quarter of the city's population by 2025, as Beijing announced on Nov 26. By 2020, the city had nearly 4.3 million people above 60 years old, according to Beijing Daily.

Sun Yiping, deputy director of Tsinghua University's Institute for Accessibility Development, says that building a barrier-free environment aims to create a more inclusive society. The change of terminology from "facilities" to "environment" will help promote the concept of universal accessibility.