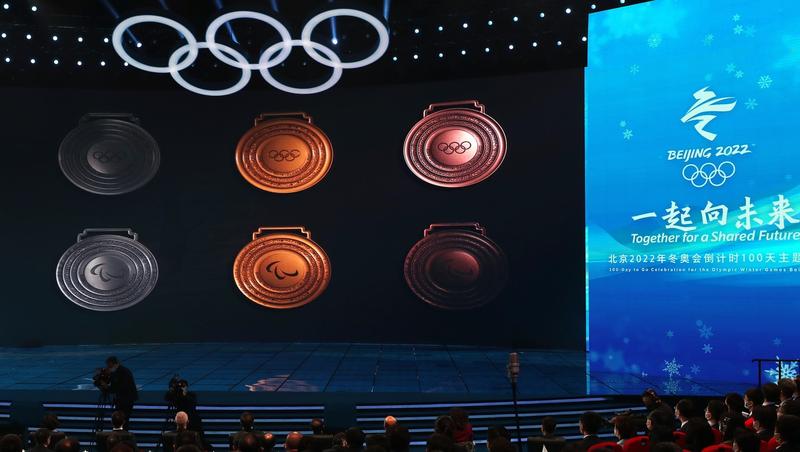 Inspired by Chinese jade ornaments, the official medals of the Beijing 2022 Olympic and Paralympic Winter Games were unveiled on Tuesday, 100 days ahead of the opening of the premier sporting event.

After months of anticipation and secrecy, the organizing committee of the Beijing 2022 Games introduced the medals－dubbed tong xin, which means togetherness－during a ceremony marking the countdown to the opening of the event on Feb 4.

The medals, inspired by yu bi, a circular Chinese jade artifact dating back 5,000 years, each has carvings of the Olympic rings on one side and inscribed with the words "XXIV Olympic Winter Games Beijing 2022"

At around 8:30 pm when the countdown clock ticked down to 100 days, Vice-Premier Han Zheng, together with China's first Winter Olympic gold medalist Yang Yang and Olympic champion swimmer Zhang Yufei, unveiled a set of gold, silver and bronze medals for the 2022 Winter Olympics.

The medals, inspired by yu bi, a circular Chinese jade artifact dating back 5,000 years, each has carvings of the Olympic rings on one side and inscribed with the words "XXIV Olympic Winter Games Beijing 2022".

Engravings of cloud patterns, an element used on the torch of the 2008 Beijing Summer Olympics, snowflakes and ice markings fill the outer rings.

The concentric rings around the center of the medals represent the pursuit of unity and harmony, common in Chinese culture, while echoing the Olympic values of solidarity, inclusiveness and promoting peace.

The other side of the medals has the Beijing 2022 emblem at the center. The outer rings are dotted with 24 stars strung together by circles, representing the 24th edition of the Winter Olympics.

Sharing the same design, but with slight changes, the 2022 Paralympic Winter Games medals were also unveiled on Tuesday, with the International Paralympic Committee's logo carved on one side and the Beijing 2022 Paralympic emblem on the other. 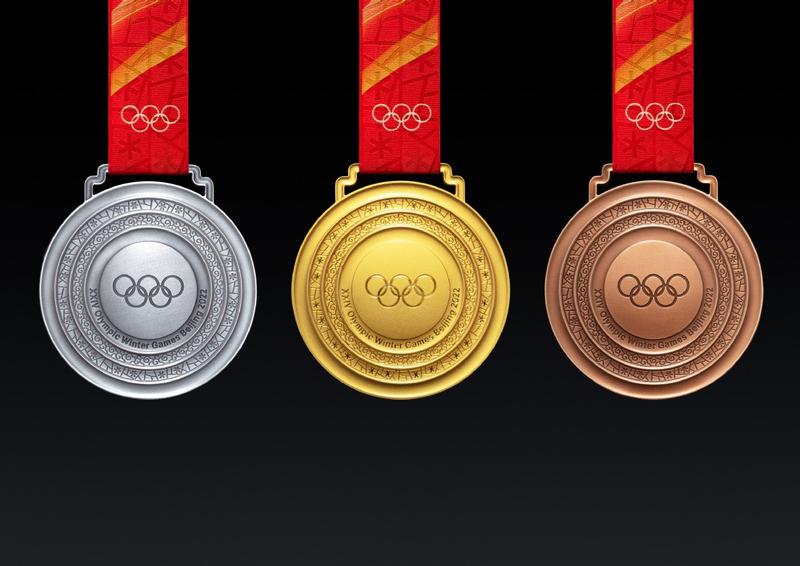 "Hopefully, by enriching the Winter Olympic elements with Chinese characteristics, we can leave a Chinese mark on the promotion of the Olympic spirit and build more excitement around the opening of the Games," said Cai Qi, secretary of the Beijing Municipal Committee of the Communist Party of China and president of the organizing committee.

The Beijing 2022 medals were designed by a team led by Hang Hai, an associate professor at the Central Academy of Fine Arts, who also came up with the idea to inlay jade rings in the 2008 Summer Games medals.

Drawing inspiration from jade for a second time honors the Chinese capital's unique status as the first city to host both the Summer and Winter Olympics, said Hang Hai, an associate professor at the Central Academy of Fine Arts

Drawing inspiration from jade for a second time honors the Chinese capital's unique status as the first city to host both the Summer and Winter Olympics, said Hang.

"To inherit the concept of the 2008 medal design is one of the principles we set ourselves approaching the design for Beijing 2022," said Hang. "Visually, it looks quite simple and plain at first glance, while details such as the carving of clouds and snowflake patterns as well as the uneven casting on the surface have made it special."

The medals will be produced by the Shanghai Mint, the same coinage company that manufactured the 2008 medals.

Also unveiled at the ceremony were medal cases, made from bamboo, and the lanyards with Olympic rings and "Beijing 2022" embroidered on ribbons made from silk. The theme song for medal ceremonies at the Games, Salute to the Warriors, was also introduced to the public.

Yang Yang, the former Olympian and chairwoman of the Beijing 2022 Athletes' Commission, said the unveiling of the medals will further motivate athletes to fight hard for podium finishes at next year's Games.

"The Olympic medal materializes all the sweat, tears and pain that each Olympian sacrifices in pursuit of athletic excellence," said Yang, who won China's first Winter Olympic gold in short-track speedskating at the 2002 Games in Salt Lake City, Utah.