By Sun Xiaochen and Cao Desheng 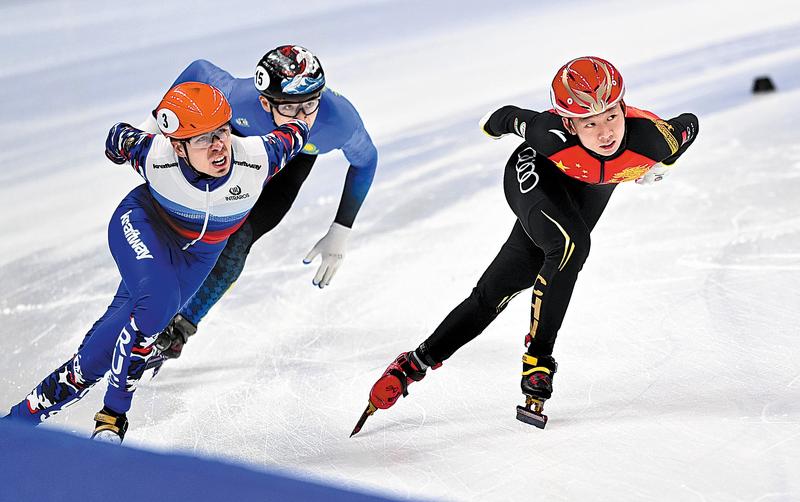 Chinese athlete An Kai (right) competes during the Beijing leg of the International Skating Union's short-track speedskating World Cup series on Saturday. The competition was also a test event and qualifier for the Beijing 2022 Winter Olympics. (WEI XIAOHAO / CHINA DAILY)

President Xi Jinping has offered his congratulations on the launch of the Olympic Channel and its digital platforms by the China Media Group, urging it to create a new page in Olympic history and fully present to the world a splendid, extraordinary and outstanding Beijing 2022 Winter Olympics and Paralympics.

Xi, who is also general secretary of the Communist Party of China Central Committee and chairman of the Central Military Commission, delivered a congratulatory message on Monday at a launch event for the channel, in which he underlined the need for the channel to make contributions to building China into a sports power.

The channel, through broadcasting Olympic sports and culture, should present Chinese sports stories to the world, promote the sportsmanship of Chinese athletes, bolster international exchanges and cooperation in the sports field, enhance mutual learning between Chinese and other civilizations and strengthen people-to-people bonds, Xi said.

Everything is pretty well organized and I think the Chinese did a really good job. I feel really safe and I am happy to be here

With the Beijing 2022 Winter Olympics due to open in 100 days, Xi urged those working for the channel to present in an innovative manner the Chinese and international athletes' unremitting efforts to exert themselves to meet the challenges for success.

They should also try to make Beijing's philosophy of hosting a green, shared, open and clean Winter Olympics understood by the world, Xi said.

He also expressed his hope that the channel will actively promote the ideas of a healthy lifestyle and give importance to developing public and children's sports.

With venues being tested and trial operations underway, Beijing's smooth preparation for the 2022 Winter Olympics has earned international acclaim as anticipation builds ahead of the Feb 4 opening ceremony.

All 12 competition venues were completed by the end of last year. The three Games zones－Beijing's downtown area, its northwest Yanqing district and co-host Zhangjiakou, Hebei province－have hosted or are staging test events that meet Olympic standards. Evaluations of the readiness of facilities, the functioning of timing and scoring systems, deployment of COVID-19 countermeasures and services for Games participants all offer organizers critical feedback to make further improvements.

An Olympic qualifying event, the Beijing leg of the International Skating Union's short-track speedskating World Cup series wrapped up four days of competition in Capital Indoor Stadium on Sunday. Some of the world's top skaters said they were impressed by their experiences on and off the ice.

"Everything is pretty well organized and I think the Chinese did a really good job. I feel really safe and I am happy to be here," champion short-track speedskater Suzanne Schulting of the Netherlands said during the event.

Schulting, the defending Olympic champion in the women's 1,000 meters, said that despite the strict pandemic control measures that are in place, the warm hospitality and considerate services provided by the host had made her stay in Beijing a comfortable experience.

However, Ding Dong, operational director at the stadium, said it's not time to celebrate with Games organizers focused on reviewing and refining lessons from the test event.

"Despite the positive remarks from athletes and international officials, the test run has enlightened us on areas we need to improve, such as some technical glitches that we will respond to as quickly as possible," Ding said.

The refurbishment of the 53-year-old indoor stadium is an example of Beijing's plan to use facilities and venues from the 2008 Summer Games. Renovation of the venues has shed light on a sustainable future for the Olympics as well as other major sporting events.

Canadian Nathalie Lambert, chair of the ISU's short-track technical committee, said her return to Capital Indoor Stadium for the meet was an eye-opening experience.

"I am impressed by what it looks like now. I'm impressed by the organization. I cannot wait to see the Olympic Games in this venue," said Lambert, who won two gold medals at the same arena during the 1993 world championships.

"The setup is fantastic. The ice is very good, not only fast but it grips really solid. The skaters love the ice.… I am crossing my fingers," she said on her hope to return for the Winter Olympics. 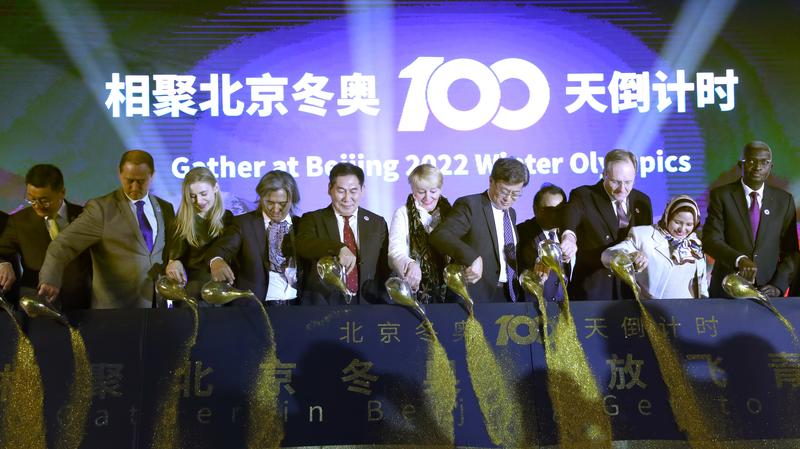 Guests attend a Silk Road-themed event on Monday in Beijing on the eve of the 100-day countdown to 2022 Winter Olympics. (ZOU HONG / CHINA DAILY)

With 10 international test events to be staged through December, the Beijing 2022 organizers will continue assessing a series of COVID-19 countermeasures in real-time practices to ensure their seamless implementation next year.

According to a "playbook" on COVID-19 safety measures released on Monday, all Games participants, including international athletes and officials, will have to be fully vaccinated before landing in China; otherwise they will need to undergo a 21-day hard quarantine upon arrival.

If their nucleic acid tests are negative upon arrival, vaccinated participants will enter a closed loop, or biosecure bubble, with their movement restricted to designated hotels or accommodation facilities and official Games venues. They will travel on special shuttle services and be separated from the public and local communities.

Those inside the bubbles will be tested daily for COVID-19 and isolated immediately if they are positive. Contact-tracing will be conducted for the duration of the Olympic and Paralympic Games, while mask-wearing will be compulsory at all venues, except during competition and when athletes pose for photos during medal ceremonies.

Last month, the Beijing 2022 organizers and the IOC decided to bar international spectators from the Games. Only Chinese mainland residents who have passed certain COVID-19 prevention requirements, yet to be announced, will be eligible to buy Games tickets.

"We want everyone at the Games to be safe; that's why we're asking all participants to follow these guidelines. Keeping everyone healthy will ensure the focus remains on the very fundamentals of the Olympic and Paralympic Games－the athletes and the sport," he said in a statement released on Monday.