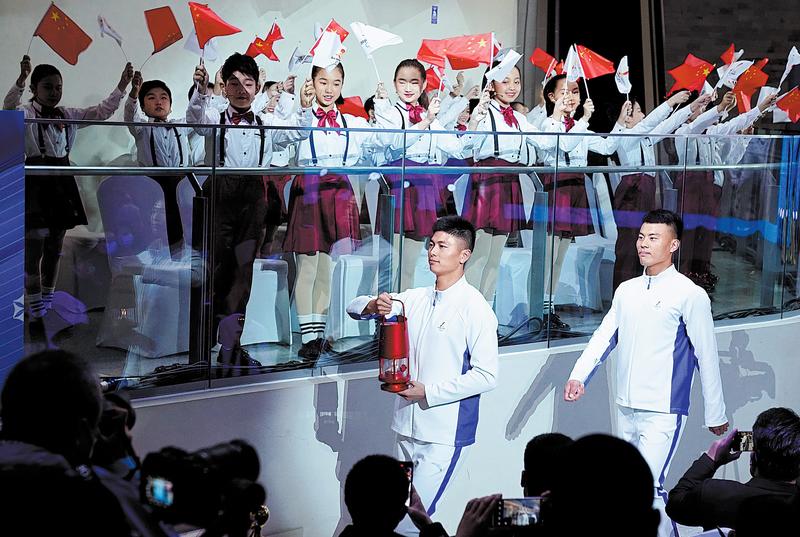 An escort holds a lantern containing the flame for the Beijing 2022 Winter Olympics at a welcoming ceremony at Beijing's Olympic Tower on Wednesday. (LIU PING / FOR CHINA DAILY)

Carrying a message of peace and solidarity, the flame for the 2022 Winter Olympic Games arrived to a warm welcome in Beijing on Wednesday.

Witnessed by organizers, sports figures, performers and students, the flame－housed in a red lantern－drew crowds of onlookers as it was escorted by volunteers into a ceremony held at Beijing's Olympic Tower. The flame arrived early on Wednesday after being flown from Greece, the birthplace of the Olympics, where it was lit two days earlier.

Public exhibitions of the torch and the traditional national relay in the host country have been streamlined for the Beijing Games due to COVID-19 precautionary measures.

Cai Qi, secretary of the Communist Party of China Beijing Municipal Committee and president of the organizing committee for the Games, lit a cauldron on a stage using a torch ignited from the lantern's flame. The lighting of the cauldron signaled that the curtain had been raised on the Beijing Winter Olympics, which run from Feb 4 to Feb 20. Games events are scheduled in three zones－downtown Beijing, the capital's northwest Yanqing district and co-host Zhangjiakou in Hebei province.

The torch relay is scheduled for Feb 2 to Feb 4, with the route connecting landmarks, historical sites and major tourism attractions in Beijing and Zhangjiakou. The culture and warm hospitality of the hosts will be on display, the organizing committee of the Games said

Due to the pandemic, Games organizers have cut back the traditional torch relay to a small-scale event. The relay will take place in three host areas and involve about 1,200 torchbearers due to COVID-19 containment protocols.

The relay is scheduled for Feb 2 to Feb 4, with the route connecting landmarks, historical sites and major tourism attractions in Beijing and Zhangjiakou. The culture and warm hospitality of the hosts will be on display, the organizing committee of the Games said.

"As an iconic cultural element of the Olympic Games, the torch relay plays a significant role in promoting the host's international image while spreading the message of peace, solidarity, friendship and health," said Zhang Jiandong, a vice-mayor of Beijing and executive vice-president of the organizing committee.

The shortened torch relay with reduced crowds, will help ensure the health and safety of all participants as well as that of local communities. The preparation work for the Games has been adapted to the pandemic situation, Zhang added.

According to the organizers, the Olympic flame will be displayed at the Olympic Tower, before being taken on an exhibition tour across the country next month, including visits to the chilly northeastern provinces in early January to engage people's interest in the Games.

An online version of the torch relay making use of virtual reality and augmented reality technologies is also planned for social media platforms, with the details yet to be announced.

Wang Xiangyu, a deputy director of Beijing 2022's culture and ceremonies department, said, "Although the length and duration of the torch relay has been reduced, this represents an innovative approach to maximize the benefits of the technology in connecting more people in an interactive way.

"However, we will keep the traditional offline event on a smaller scale to make sure that people still get to feel the warmth of the flame and get inspired by the Olympic spirit up close," he said.

The design concepts of the flame lantern, the demonstration cauldron, the logo for the torch relay and the torchbearers' uniforms, all of which drew inspiration from Chinese culture and traditions, were also unveiled at Wednesday's ceremony.

The lantern, which will be used for the flame exhibition tour, is based on the Changxin Palace Lamp, a bronze oil lamp from the Western Han Dynasty (206 BC-AD 24), while the cauldron features the same red and silver colors and cloud pattern as the torch.

"The designs of the torch, lantern and cauldron echo each other within a consistent concept that strikes a strong impression of dynamism and vitality," said Li Jianye, a member of the design group.

Drawing inspiration from the main cauldron for the 2008 Beijing Summer Games, the torch for the Beijing 2022 Games is dubbed the "flying ribbon". It spirals upward to create two overlapping, fluttering ribbons with the red, inner one evoking rising flames to contrast with the silver-plated outer layer.