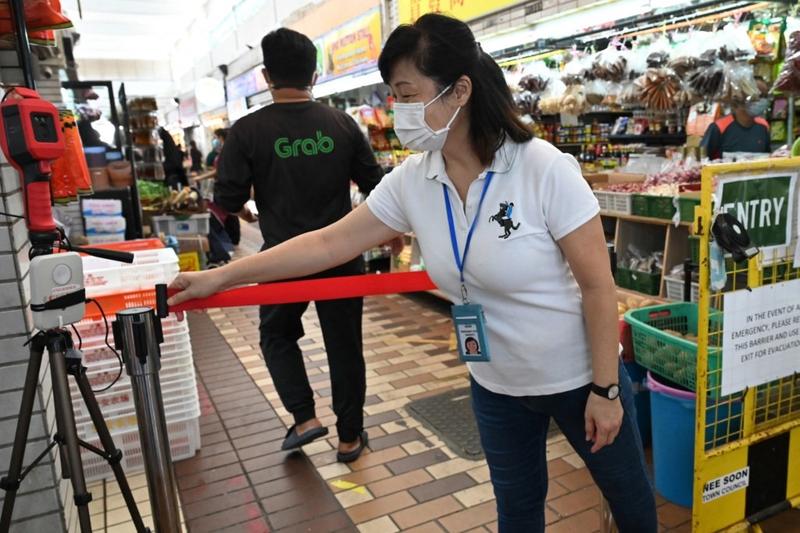 An officer manages the flow of people into a market in an attempt to curb the spread of the COVID-19 coronavirus in Singapore on Oct 9, 2021. (ROSLAN RAHMAN / AFP)

Of the 360 ICU beds in public hospitals, 285 have occupants, lowering the utilization rate to 79.2 percent from 83.6 percent a day earlier, according to a statement from the Ministry of Health Tuesday

Of the 360 ICU beds in public hospitals, 285 have occupants, lowering the utilization rate to 79.2 percent from 83.6 percent a day earlier, according to a statement from the Ministry of Health Tuesday.

Of that total, 146 patients were being treated for Covid-19 and 139 for non-Covid ailments.

Singapore reported 3,277 new COVID-19 cases as of noon on Tuesday. The ratio of community cases for the past week over the week before is 1.11, and officials are watching for this figure to dip below 1 before potentially easing curbs. 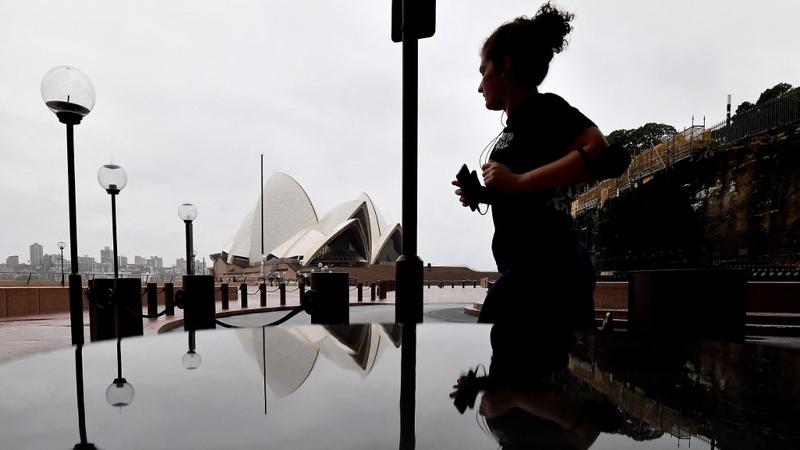 A woman jogs around the Opera House on Oct 11, 2021, as Sydney ended their lockdown against the Covid-19 coronavirus after 106 days. (SAEED KHAN / AFP)

All fully-vaccinated Australian citizens and permanent residents will be able to leave the country without a special exemption from Nov 1, authorities said on Wednesday, as Australia eases coronavirus restrictions amid a rise in vaccination rates.

Many of these are now expected to return after Sydney and Melbourne ended quarantine rules for inoculated travelers from Nov 1. Other cities, mostly virus-free, are expected to ease their border rules once they reach higher vaccination rates.

Federal Health Minister Greg Hunt said the rollout is expected to begin by Nov 8 once the government receives advice from the country's vaccination technical advisory group.

The decision to lift the travel ban from next week comes after Singapore on Tuesday said it would allow quarantine-free entry to travelers vaccinated against COVID-19 from Australia from Nov 8.

A third wave of infections fueled by the Delta variant forced lockdowns in Australia's biggest cities, Sydney and Melbourne, and both have been gradually easing restrictions after racing through their vaccination targets.

Even with the Delta outbreaks, Australia has fared better than many comparable countries, with around 164,000 cases and 1,669 deaths. Victoria state reported 1,534 new cases on Wednesday, up from 1,510 a day earlier, while those in New South Wales rose to 304 from 282.

Bahrain's health authorities announced on Tuesday that Sinopharm vaccines will be administered for all children in the country aged from three to 11 years old.

Registration will be opened on Wednesday, said the Health Ministry's immunization committee, noting the decision was made after studying all the "medical recommendations" issued in this regard.

"More details will be announced on the Health Ministry's website," it added.

Bahraini National Medical Taskforce for Combatting the Coronavirus taskforce stressed the importance of vaccinating the aforementioned age group to protect them, their families and the society. 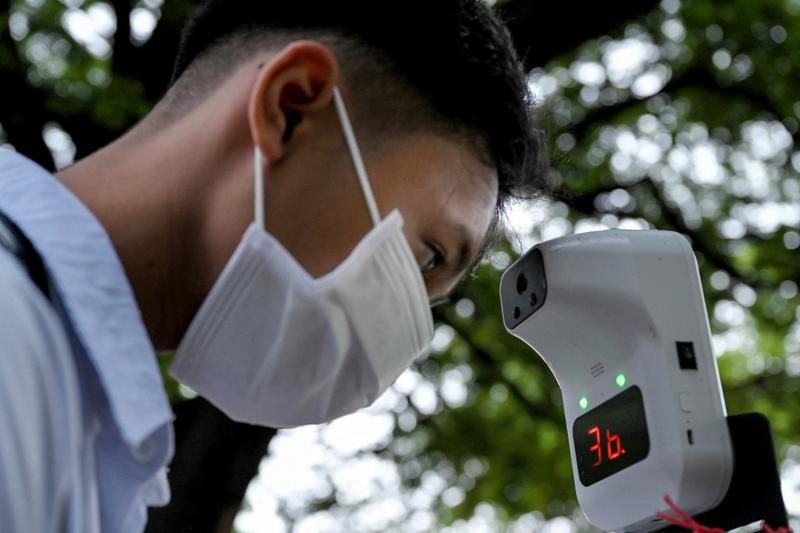 In this file photo taken on Sept 15, 2021, a student has his temperature checked after arriving for classes in Phnom Penh as Cambodia reopened schools in low-risk COVID-19 coronavirus areas. (TANG CHHIN SOTHY / AFP)

They will be allowed to leave safe tourism destinations when a polymerase chain reaction test on their fifth day showed that they are negative for COVID-19, he added.

Khon said this policy will be then implemented in Siem Reap province, the home of the famed Angkor Archeological Park, in January 2022. 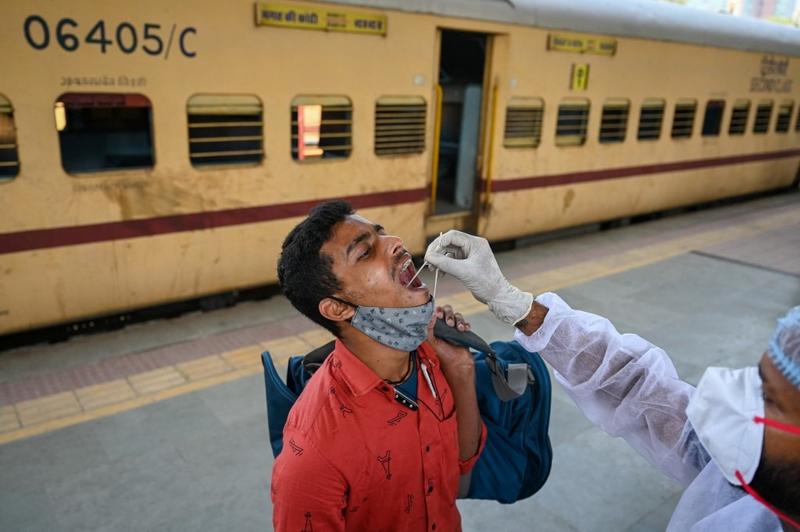 A health worker takes a swab sample of a passenger to test for the Covid-19 coronavirus at a railway platform in Mumbai on Oct 26, 2021. (PUNIT PARANJPE / AFP)

India's efforts to contain the COVID-19 pandemic seem to have achieved results as the daily new cases show a downward trend. However, the threat of a third wave still looms large.

India's federal health ministry officials attribute the declining active COVID-19 caseload to the preventive measures India has taken and the ongoing vaccination program across the country.

The recovery rate of COVID-19 patients in the country increased to 98.19 percent on Tuesday, the highest since March 2020.

Despite the decline in cases, the threat of a third wave still looms large in India.

During the outbreak of the second wave of COVID-19 in the country, India saw its hospitals overwhelmed with patients and health officials struggling for medical oxygen supplies and life-saving drugs.

And long queues outside hospitals, patients struggling to breathe, body bags at overburdened crematoriums and bodies floating in the water became the defining images.

However, experts said that only 36 percent of the population will be vaccinated fully by the year end.

Authorities in several provinces of Laos have ordered the continuation of lockdowns and travel bans in a strengthened attempt to slow the rising tide of infections.

In central Laos' Khammuan province, a lockdown is in place until Nov 8. Anyone needing to enter the province for essential reasons must first get permission from provincial authorities, local daily Vientiane Times reported on Wednesday.

They must also have had two doses of a COVID-19 vaccine as well as a certificate proving they are COVID-19-negative following a test done in the past 72 hours. Residents of Khammuan wishing to travel outside the province must also get permission from provincial authorities.

In northern Laos' Bokeo province, travel between districts is banned until Nov 8. Markets in virus-risk zones have been temporarily closed, while the sale of street food has been suspended.

Food delivery may continue but all the food must come from restaurants in green zones, and payments must be made with a bank card so that no cash is used.

In Bolikhamxay province, authorities have ordered a lockdown until Nov 2 and are strengthening travel checks on the streets, with people to be prosecuted if they break the rules.

Malaysia reported another 5,726 new COVID-19 infections as of midnight Tuesday, bringing the national total to 2,442,224, according to the health ministry.

Fifteen of the new cases are imported, with 5,711 being local transmissions, data released on the ministry's website showed Wednesday.

Another 84 more deaths have been reported, bringing the death toll to 28,576.

Oyun-Erdene made the remarks during a regular meeting of the government, saying that the move aims to revive the tourism sector, which has been hit hard by the pandemic.

"Foreign tourists who have not yet been vaccinated against the virus can come to Mongolia," he said. "They can be vaccinated free of charge upon arrival in our country."

Mongolia's tourism sector as a whole has stagnated over the past two years due to the pandemic, Nyamjav Urtnasan, the country's minister of environment and tourism, has recently said.

There are more than 1,600 enterprises and 88,000 jobs at risk in Mongolia's tourism sector, the official said.

New Zealand reported 74 new Delta variant cases of COVID-19 in the community on Wednesday, bringing the total number of confirmed cases in the country's community outbreak to 2,832.

A total of 68 of the new infections were recorded in the largest city of Auckland, six in nearby Waikato, Director-General of Health Ashley Bloomfield told a press conference.

Forty-one community cases are being treated in hospitals, including five in intensive care units or high dependency units, Bloomfield said.

There are 2,486 cases that have been clearly epidemiologically linked to another case or a sub-cluster, and a further 269 cases for which links are yet to be fully established, he said.

New Zealand also reported four new cases identified at the border among recent returnees. The cases have remained in quarantine in Auckland and Christchurch.

The Philippines will open COVID-19 vaccinations to all minors aged 12 to 17 starting early November, the Health Department said, after initially allowing only those with health conditions. Accelerating inoculations for the younger population will help boost the nation’s economy this quarter and spur holiday consumption, vaccine czar Carlito Galvez earlier said.

South Korea reported 3,363 more cases of COVID-19 variants for the past week, bringing the total number of such cases to 46,417, the health authorities said Wednesday.

Among the new cases found for one week till Oct. 23, 125 were imported from overseas while the remaining 3,238 were locally transmitted, according to the Korea Disease Control and Prevention Agency.

The far higher number of local transmissions indicated the domestic spread of the variants.

Of the new cases, 3,362 came from the Delta variant, and one from Alpha.

Among the combined cases involving the variants, 42,945 stemmed from the Delta variant, 3,294 from Alpha, 151 from Beta and 27 from Gamma. The four variants are believed to be more transmissible than the original one.