By Leonardus Jegho for China Daily 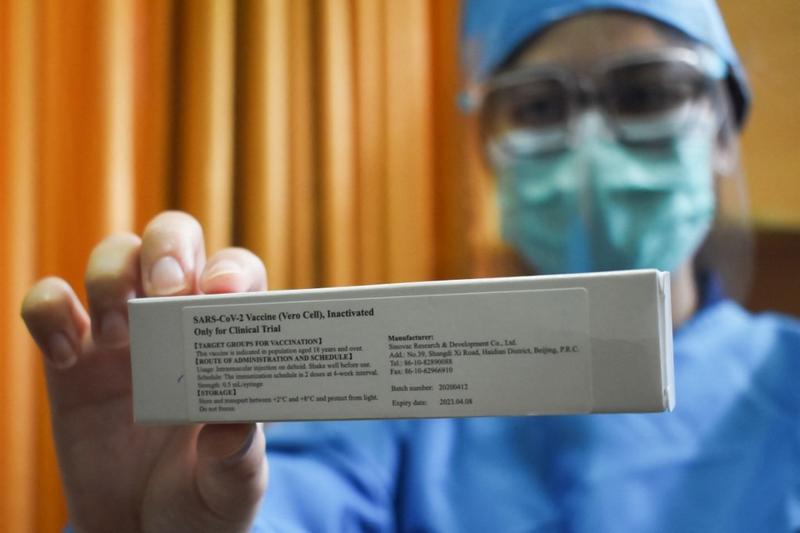 In this July 6, 2020 photo, a doctor displays a COVID-19 vaccine at Padjadjaran university educational hospital in Bandung, West Java in preparation for efforts to vaccinate volunteers in the community. (TIMUR MATAHARI / AFP)

JAKARTA – Indonesia now feels more optimistic about producing its own coronavirus shots next year even as it pushes ahead with a COVID-19 vaccination rollout using imported vaccines.

"We need to increase our self-reliance in making available COVID-19 vaccines domestically," said Penny K Lukito, head of Indonesia's Food and Drug Monitoring Agency, or BPOM. "We expect that by April 2022, there will be a process (at our office) to issue emergency use authorization."

For this to happen, BPOM expects to examine "interim results" of the vaccine candidate being jointly developed by state-owned Airlangga University and private firm PT Biotis Pharmaceuticals Indonesia by April next year.

Airlangga University, located in East Java's Surabaya, and PT Biotis Pharmaceuticals Indonesia in West Java's Bogor are speeding up their efforts to develop a vaccine for the coronavirus using an inactivated virus platform, including those relevant to new variants. Progressing faster than six other local organizations that are also developing COVID-19 vaccines, the Airlangga-Biotis venture has been widely reported in the local media and viewed as the most promising.

The other organizations that are developing COVID-19 vaccine candidates – albeit on alternative platforms such as recombinant virus, recombinant protein and DNA, and mRNA – include privately owned Eijkman Institute for Molecular Biology, government-owned Indonesian Institute of Sciences, and state higher-learning institutes Bandung Institute of Technology, Pajajaran University, University of Indonesia, and Gajah Mada University. Like Airlangga and Biotis, scientists involved in those organizations are Indonesian nationals.

The two-year-old National Research and Innovation Agency, which is overseen by the Research and Technology Ministry and now chaired by former president Megawati Soekarnoputri, has been sponsoring and coordinating the institutions' vaccine-making undertakings.

Indeed, one of the problems is funding. Still, Indonesia's whole population has the right to a healthy lifestyle and so we should develop our own vaccines.

"The phase 1 preclinical trial on the vaccine candidate turned out good results from the aspect of immunogenicity," Lukito said, adding that humoral and cell-mediated immune response is promising.

A human clinical trial is the next step, which is set to begin soon.

According to earlier reports, one of the challenges to be faced by Airlangga and Biotis as well as the other institutions would be how to get members of the unvaccinated human population to take part as Indonesia proceeds with its ongoing national inoculation campaign. As such, human clinical trials will probably be conducted in areas outside Java and Bali, where vaccination rates are lower.

Airlangga University rector Mohammad Nasih told parliament that the upcoming vaccine to be turned out by his university and Biotis would also be used for booster jabs.

The fourth most populous country in the world, Indonesia has set a target of inoculating 208.2 million out of its total population of 270.2 million people in order to achieve herd immunity.

However, epidemiologist Ede Surya Darmawan from the University of Indonesia said that the country was too late in developing coronavirus vaccines considering that COVID-19 had already been detected in the Southeast Asian nation in January of last year.

"Indeed, one of the problems is funding. Still, Indonesia's whole population has the right to a healthy lifestyle and so we should develop our own vaccines," Darmawan said. He stressed the importance of having any progress on the domestic development of coronavirus vaccines made public periodically by the authorities, which has thus far not happened.

Delvac Oceandy, an Indonesian national working as a senior lecturer and researcher in molecular cardiac biology at Manchester University in the United Kingdom, highly appreciates the Airlangga-Biotis venture and said that Indonesia should be capable of designing, developing and producing vaccines on a massive scale, adding that it can cooperate with overseas parties to make these possible.

"For me, what is important are end-results. That's the only (criteria on which) we're judged," said Oceandy, who obtained a doctorate in molecular genetics from the University of Queensland in Australia and won numerous international awards for his scientific work.

While agreeing with Darmawan that the Indonesian vaccine researchers should provide updates periodically, Oceandy, who had worked at Eijkman in Jakarta before moving to the UK, suggests that they also publish their research results in international journals.

The Indonesian government has not yet made an official estimate of the amounts of vaccines needed for the remainder of this year and for the next while COVID-19 cases are showing a downward trend.

Bambang Heriyanto, secretary and spokesperson of state-owned vaccine manufacturer PT Bio Farma, said that "for next year's needs, the government expects they will be fully met with domestically made vaccines including Merah Putih products". Merah Putih, or Red White, refers to the colors of the Indonesian national flag.

Headquartered in Bandung, West Java, Bio Farma is the largest vaccine manufacturer in Southeast Asia and has been producing COVID-19 vaccine under license from China's Sinovac Biotech.

Despite the government's strong intention to locally produce coronavirus vaccines, it maintains that cooperation between local vaccine makers and overseas vaccine developers is still crucial.

"The number of pharmaceutical industries in the world with adequate capacity and with capacity to fulfill global needs is still limited," BPOM's Lukito said.

She pointed to the urgency of Indonesia cooperating with foreign parties in research and clinical trials and in technology transfer, which will eventually support the country to become self-reliant in vaccine supply.

Indonesia has witnessed a continued decline of new COVID-19 infections over the previous 13 weeks after the second wave peak in July and reached a low rate, Covid-19 task force spokesperson Wiku Adisasmito said on Oct 24.

The ease has led the government to easing large-scale social and business restrictions and allow schools to reopen albeit in phases and open borders to tourists of 19 countries and regions.

But warnings about possible emergency of a third wave are sounded amid signs of rising “public euphoria” that may cause people ignore health protocols.

*The writer is a freelance journalist for China Daily.