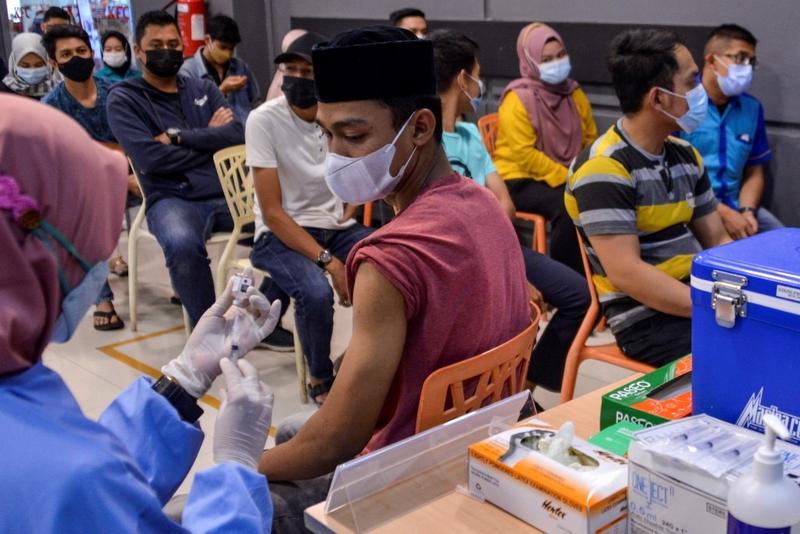 A health worker (left) prepares a dose of the Sinovac vaccine against the COVID-19 coronavirus during a vaccination drive at a shopping centre in Banda Aceh on June 22, 2021. (CHAIDEER MAHYUDDIN / AFP)

Expanding the partnership between China and Indonesia on vaccine production is crucial to Southeast Asia's battle against the pandemic, according to public health experts.

China is also keen on supporting Indonesia's plan to become a regional hub for vaccine manufacturing in Southeast Asia, according to State Councilor and Foreign Minister Wang Yi

Indonesia is currently using vaccines jointly produced by the state-owned pharmaceutical firm Bio Farma and China's Sinovac Biotech. The partnership has allowed Sinovac to conduct clinical trials of its vaccine, CoronaVac, in Indonesia.

Bambang Heriyanto, Bio Farma's spokesman, told China Daily that the company has received 81.5 million doses of bulk vaccine from Sinovac. All of these were already processed, producing 65.6 million doses.

Out of these processed vaccines, 51.4 million doses were filled in vials. A total of 38.92 million doses have been distributed, Heriyanto said. Bio Farma is the only vaccine manufacturer in Indonesia and the two companies signed an agreement in August 2020 for the supply, production and technology licensing of CoronaVac.

Health experts said that Indonesia can aid in shoring up the supply of vaccines in the Southeast Asian region.

Indonesia has one of the biggest pharmaceutical industries in Asia, with direct investments to the sector estimated to hit nearly $20 billion by 2025, according to a report by Cekindo, a Jakarta-based consultancy.

Indonesia's plan to become a regional hub will allow it to increase its manufacturing capacity, which in turn will help Southeast Asia's vaccine rollout, according to Sulfikar Amir, associate professor of science, technology, and society at the School of Social Sciences in Singapore's Nanyang Technological University.

Amir said apart from producing COVID-19 vaccines, Sino-Indonesian cooperation can be extended toward the development of other vaccines.

"This is an opportunity for both countries to develop their scientific capacity not only for vaccine production but also for other (types of) medical technology," he said.

Ede Surya Darmawan, chairman of the Center for Health Administration and Policy Studies at Universitas Indonesia, welcomed China's support, noting that a technology transfer should also be seen as "a form of diplomacy" and part of "humanitarian cooperation".

Indonesia has the highest number of COVID-19 cases in Southeast Asia, reporting over 1.93 million people infected by the novel coronavirus ever since the pandemic started. The country recorded 13,737 new cases on June 20 – its highest daily increase since January 30.

Health authorities said that the recent surge might have been caused by the entry Delta variant. The Delta variant, which was first detected in India, has also been detected in COVID-19 cases in the Indonesian capital city of Jakarta and the provinces of Central Java and East Java province.

Indonesian authorities aim to achieve herd immunity by inoculating 181.5 million people this year. President Joko Widodo launched the nation's vaccination program in January by being the first in the country to receive a dose of CoronaVac.

The rollout has thus far been lagging, with only 18.2 million people getting their first dose as of June 8. Widodo is aiming to accelerate the pace of vaccination, with the goal of inoculating 700,000 people per day within the month and having one million people vaccinated each day by July.

Indonesia has secured 94.7 million doses as of June 13, of which nearly 90 percent came from Sinovac. The country has also received supplies from Chinese pharmaceutical company Sinopharm as well as the global COVAX facility, which is backed by the World Health Organization.

China is also keen on supporting Indonesia's plan to become a regional hub for vaccine manufacturing in Southeast Asia, according to State Councilor and Foreign Minister Wang Yi.

Wang said China will encourage clinical trials of more Chinese vaccine varieties in Indonesia. He made this statement at the inaugural meeting of the China-Indonesia high-level dialogue cooperation mechanism held on June 5 in Southwest China's Guizhou province. Indonesian Foreign Minister Retno Marsudi said Indonesia appreciates China's support in its fight against the pandemic, especially the bilateral cooperation on vaccines.

Indonesia is also relying on local production to prop up supply.  Indonesia's research institutes, government agencies and state universities are jointly developing a COVID-19 vaccine called Merah Putih. Translated as "red and white" in the Indonesian language, Merah Putih was named after the colors of the nation's flag. Authorities are hoping that the homegrown vaccine will be available by the end of the year.

Darmawan of Universitas Indonesia said that even with mass vaccination, people should still continue practicing health protocols including the wearing of face masks, frequent washing of hands and physical distancing.

Dicky Budiman, epidemiologist at Griffith University in Australia, said that the China-Indonesia vaccine cooperation is needed amid rising cases not only in Indonesia but other countries in Southeast Asia as well.

"But the vaccine is just one of the many tools (that can fight the pandemic)," Budiman said, adding that the mass vaccination still needs to be complemented by other measures such as testing, contact tracing, isolation and quarantining.

Leonardus Jegho in Jakarta contributed to this story.