Street performers get more license to show off skills

By Xing Yi in Shangha 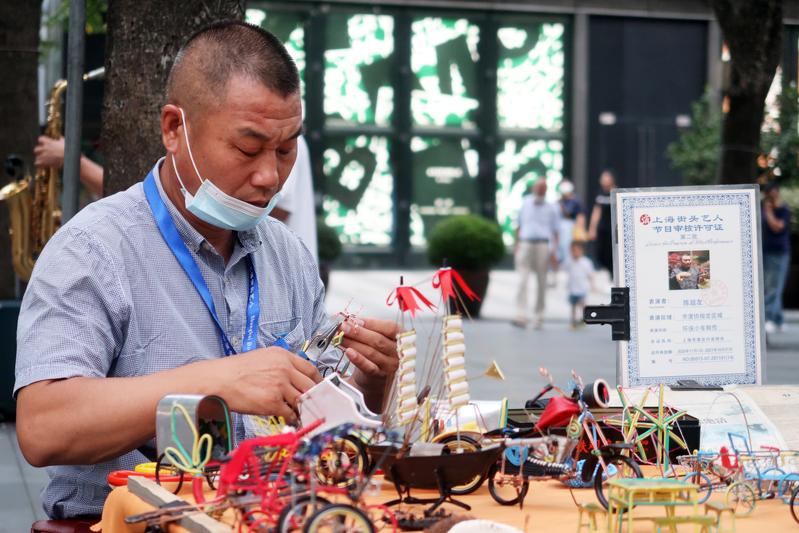 Chen Chaoyou, a handicraft artist, makes models in the square in front of Jing'an Park in Shanghai. He is one of the 300-strong licensed buskers in the city. (XING YI / CHINA DAILY)

There is no shortage of daily concerts and shows in Shanghai, where hundreds of theaters, music halls, live houses and cultural centers are scattered across, with performances for a wide audience.

Yet for people who don't have time or money for a night in a music hall, buskers provide them with shows－people encounter their favorite songs at street corners amid the hustle and bustle of city life.

Since 2014 Shanghai has embraced busking as part of its urban cultural scene and introduced rules that encouraged such shows while keeping the trade in order.

That year, the Shanghai Performance Trade Association issued the first eight licenses, and the number of licensed buskers has grown since then.

More than 300 people perform at more than a dozen designated places now.

When Fu Zhuo was studying in a high school in Shanghai five years ago, he bumped into a singing guitarist performing on a street, which impressed him and planted the "seed of street performance" in his heart.

"Earlier, I wished I could sing to people on the streets of Shanghai someday," says Fu, who learned to play classical guitar in his childhood.

The realization of his dream took a detour when Fu went to study in Leicester, the United Kingdom, in 2017.

"There is a culture of busking and street art in the UK, which encouraged me to start my journey," he says.

From 2018 to 2020, Fu performed at the city center of Leicester in his spare time every week, and sometimes he went to other cities to perform as well.

He also recorded and uploaded his songs to Chinese video-sharing platform Bilibili, where his videos have received nearly 5 million views.

"You will never know what kind of audience you're going to encounter and what kind of chemistry it is going to sparkle. It is an exciting experience," says Fu.

On returning to Shanghai last year, Fu was told he needed to get a license to perform on the street.

Fu says he understands the arrangements, because through selecting and granting licenses, both buskers' personal safety and the stability and quality of the performance can be better guaranteed.

"In general, the principles for busking in the UK are not making much noise or blocking public roads or carrying out street trade, but in some places, such as the London metro, licenses are required," he says in one of his videos on Bilibili that explains "busking in Britain".

In May when Fu finally got a license from the Shanghai Performance Trade Association, he proudly put that on his Bilibili profile page.

"It's a big family, and I got to know a lot of new friends who are dedicated to music," Fu says about the association.

"I'm also happy to witness a change in people's mindset that they no longer treat buskers as vagabonds or homeless people."

Besides music performers, there are also street handicraft artists, balloon clowns and magicians who take daily shifts to entertain people with their talent across 16 spots in downtown Shanghai, the most notable one being the square in front of Jing'an Park.

Wei Zhi, chairman of the association, told Chinese news outlet ThePaper.cn that the street artists were the first to resume shows in the city when the COVID-19 pandemic was brought under control in China, and have given more than 10,000 performances since last year.

"They have also performed in the city's major festivals, such as the monthlong Double Five Shopping Festival starting May 5 and the Double Six Nightlife Festival that kicked off on June 6, and have performed outside the observation area of vaccination centers to entertain people waiting in lines and encouraged others to come and get vaccinated," Wei says.

"The street artists not only reflect the city's management level, but they also participate in it, too," she adds.

Fan Xuehan and Yang Hong contributed to this story.