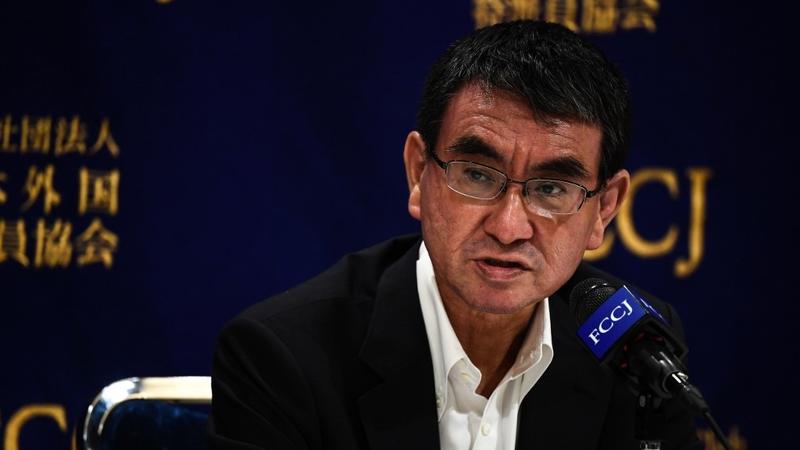 In this June 25, 2020 photo, then Japanese Defense Minister Taro Kono speaks at a press conference at the Foreign Correspondents' Club of Japan (FCCJ) in Tokyo. (CHARLY TRIBALLEAU / AFP)

Japan’s vaccination minister Taro Kono is the favorite to replace Prime Minister Yoshihide Suga as the leader of the ruling Liberal Democratic Party, according to a poll conducted by Nikkei and TV Tokyo.

In total, 27 percent of Nikkei survey respondents opted for vaccination minister Taro Kono as “the right person” to become the party’s president, from a choice of 10 Liberal Demicreatic Party politicians

In total, 27 percent of survey respondents opted for Kono as “the right person” to become the party’s president, from a choice of 10 LDP politicians.

Suga announced on Sept 3 that he would not seek another term as the party’s leader after about a year on the job. His support rate has plummeted amid mounting criticism over his pandemic management. Whoever takes over as leader is virtually assured of becoming prime minister due to the LDP’s dominance in parliament.

Kono declared his candidacy for the leadership on Friday, the third lawmaker to officially join the race alongside Kishida and Takaichi.

The Nikkei poll also gave the current cabinet an approval rating of 36 percent, almost unchanged from the previous month’s 34 percent, and lower than the disapproval rating of 56 percent. The survey comprised of responses from 984 randomly contacted men and women over the age of 18.