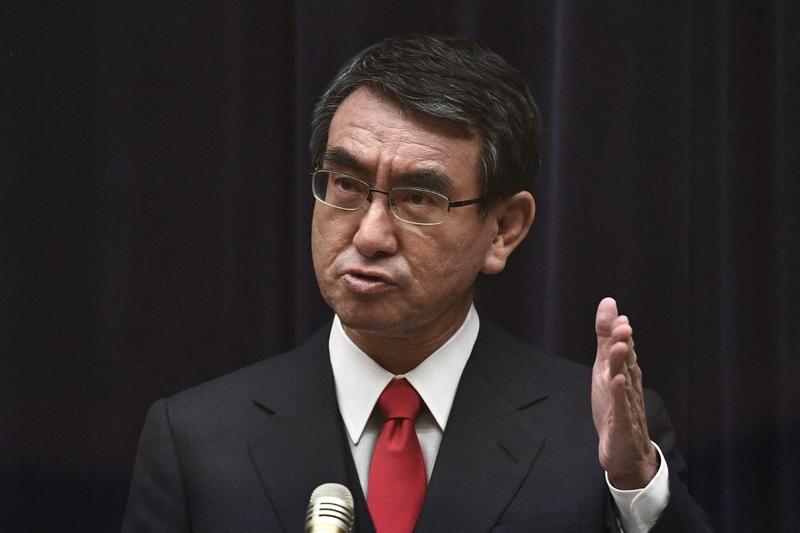 Japan's minister in charge of COVID-19 vaccinations, Taro Kono, speaks during a press conference on the planned launch of the COVID-19 vaccine in Tokyo on February 16, 2021. (KAZUHIRO NOGI / AFP)

Former Foreign Minister Taro Kono was the favorite to become Japan’s next leader in two major public opinion polls as the ruling party prepares to choose a successor to Prime Minister Yoshihide Suga later this month.

Kono came top in the media polls over the weekend asking who would be the most appropriate person to take over, scoring almost 32 percent in a survey by Kyodo News carried out Sept 4-5, with 37 percent of ruling Liberal Democratic Party supporters picking him. He was followed by former Defense Minister Shigeru Ishiba at 26.6 percent and another former Foreign Minister Fumio Kishida with 18.8 percent.

Former Foreign Minister Taro Kono came top in the media polls over the weekend asking who would be the most appropriate person to take over, scoring almost 32 percent in a survey by Kyodo News carried out Sept 4-5

Fourth and fifth places were taken by potential female candidates: Seiko Noda and Sanae Takaichi with 4.4 percent and 4 percent, respectively. A separate poll by the Yomiuri newspaper carried out on the same dates put the top three candidates in the same order, with Kono, the government’s vaccine czar, at 23 percent.

The race was thrown open last week when Suga announced he was abandoning plans to run for another term as leader of the LDP as his support rate plummeted and criticism mounted over his pandemic management. The party’s new leader is virtually guaranteed to become the next prime minister, due to the ruling coalition’s dominance in parliament.

The public doesn’t get a say in the choice of party leader, who will be selected in a Sept 29 vote among LDP lawmakers and rank-and-file party members. While horse trading among the party’s powerful parliamentary factions often determines the result, the party must also bear in mind a general election that must be held by late November.

While Suga’s support had slumped, other parties have largely failed to attract the interest of voters. The Yomiuri poll found support for the main opposition Constitutional Democratic Party of Japan at less than 10 percent, compared with 36 percent for the LDP.

READ MORE: Here's who to look out for in the race to succeed Japan's Suga