Oman looks to China for tourism and technology 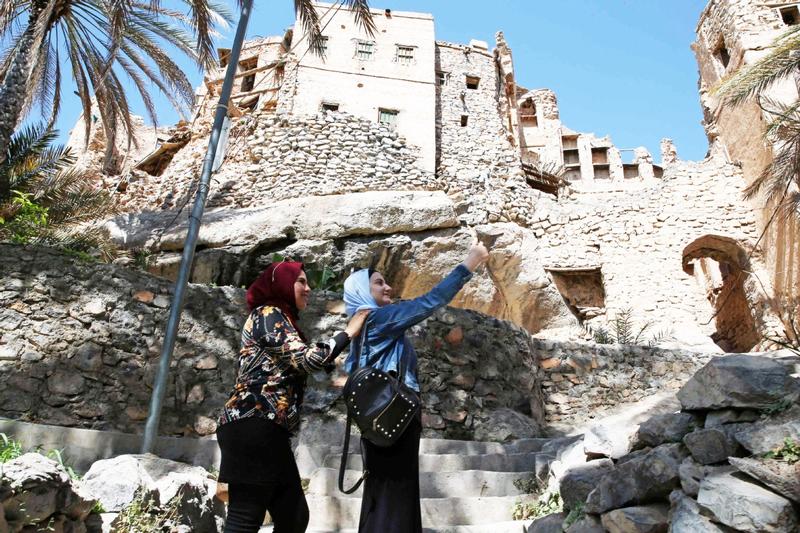 Tourists visit the village of Misfat al-Abriyeen on the escarpments of Oman's Grand Canyon on Feb 8, 2021. (MOHAMMED MAHJOUB / FOR CHINA DAILY)

Oman hopes to revive its tourism sector and boost its digital economy under stepped-up cooperation with China.

Oman, a member of the League of Arab States, has said it is opening all its economic sectors to Chinese investment. Apart from tourism and information technology, the Middle Eastern nation has identified human resources as another area with scope for greater engagement with China.

Norafidah Ismail, a lecturer at the School of International Studies at Universiti Utara Malaysia, said cooperation on the digital economy between China and Oman "is imperative and urgent".

"The call of Chinese Foreign Minister (Wang Yi) on Oman to jointly work (on) China-Arab data security cooperation is practical," Ismail said. "One of the many reasons, according to the foreign minister, is to highlight the importance of developing countries during the rule formulation regarding global digital economy."

China-Oman cooperation in the health sector seems new, yet critically important for both countries.

Norafidah Ismail, a lecturer at the School of International Studies at Universiti Utara Malaysia

During a visit last month, Wang said he hoped to see the joint implementation of the Initiative on China-Arab Data Security Cooperation. The pact would "help raise the voice of developing countries" in this field, he said.

China and the 22-member League of Arab States signed the agreement on March 29, a landmark move aimed at upgrading their digital ties and building on collaboration against cyber threats while promoting technological development.

Besides virtual connectivity, China and Oman have agreed to do away with visas for travelers from the two countries, with the partnership also leading to agreements related to culture, media and health.

Dubai-based Froilan Malit Jr, a Middle East migration specialist from the University of Cambridge in England, said the visa-free arrangements between China and Oman "reflect their deepening interstate diplomatic relations".

As most Persian Gulf countries have increasingly liberalized their immigration policies, "Oman's response is not an outlier", Malit said. "It reflects Oman's strategic attempt to encourage more immigration (and) tourism."

Maya Senussi, a senior economist for the Middle East at Oxford Economics, said that leaving aside pandemic-related adjustments, entry requirements between Oman and China have been progressively eased over the past few years, and the reciprocal visa-free arrangement "is a natural step to pursuing deeper ties".

Oman is China's fourth-largest trading partner in the Arab world, with the value of flows between the two valued at almost US$19 billion in 2020, according to China's Ministry of Commerce.

In its April economic update on the Gulf Cooperation Council region, the World Bank said Oman's overall growth was estimated to have shrunk 6 percent last year, mainly driven by a contraction of more than 9 percent in non-oil gross domestic product as lockdown measures weighed on domestic demand.

"The tourism sector has been a key driver of Oman's diversification drive and it will remain a priority even if it takes time to return to precrisis levels," Senussi said.

Official figures in Oman show that more than 3.5 million tourists visited the country in 2019, an 8.14 percent increase from the previous year, the Gulf Today newspaper reported. Last year, it was forecast that Oman would welcome more than 75,000 Chinese tourists by 2023.

Ismail said the recovery in tourism is "not entirely dependent on the visa-free deal". Other factors include likely developments related to so-called COVID-19 passports and other health screening procedures. "China-Oman cooperation in the health sector seems new, yet critically important for both countries. China, in particular, has been very generous in offering its medical assistance to Oman during the pandemic," Ismail said.