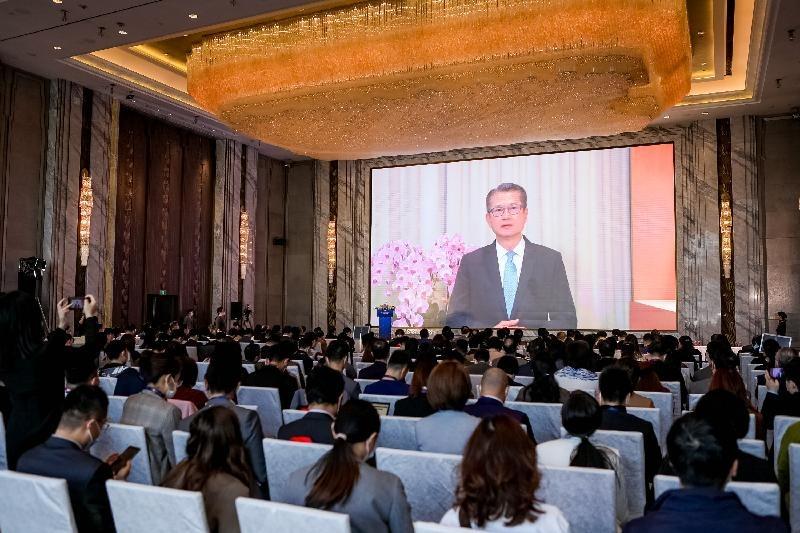 Financial Secretary Paul Chan Mo-po delivers a speech via video at a symposium in Shanghai co-hosted by Invest Hong Kong (InvestHK) and the Hong Kong Economic and Trade Office in Shanghai of the HKSAR government on March 25, 2021. (PHOTO / HKSAR GOVERNMENT)

HONG KONG - Paul Chan Mo-po, financial secretary of the Hong Kong Special Administrative Region government, said on Thursday that with the backing of the country, Hong Kong has continued to be a good partner of mainland enterprises that look to expand in overseas markets.

Delivering a video speech at a symposium in Shanghai co-hosted by Invest Hong Kong (InvestHK) and the Hong Kong Economic and Trade Office in Shanghai of the HKSAR government, Chan said Hong Kong's economy has been hit hard by social unrest and the COVID-19 pandemic in the past two years.

As a result, the outside world is concerned about Hong Kong's security and investment environment and was not certain whether Hong Kong could continue to serve as a springboard for mainland enterprises to enter the international market.

Chan said with the Law of the People's Republic of China on Safeguarding National Security in the HKSAR enacted last year, Hong Kong has quickly restored social stability as well as law and order.

This year, the National People's Congress (NPC), the country's top legislature, has adopted a decision on improving the electoral system of the HKSAR to ensure the implementation of the principle of "patriots administering Hong Kong", allowing Hong Kong to break through political internal conflicts and idling, and to improve the administration efficiency of the HKSAR government, he said.

Chan also said that over the past two years, Hong Kong's financial market has remained stable and orderly. Capitals continue to flow in and out freely. The Hong Kong dollar is freely convertible, and the linked exchange rate continues to operate smoothly. Moreover, trading on the Hong Kong stock market is brisk and orderly.

Chan said that there has been no significant outflow of capital from Hong Kong's banking system over the past two years, and that by the end of last year a total of US$50 billion had flowed into the Hong Kong dollar system.

Despite the challenges, Hong Kong's status as an international financial center remains very solid and Hong Kong continues to be competitive, he said.