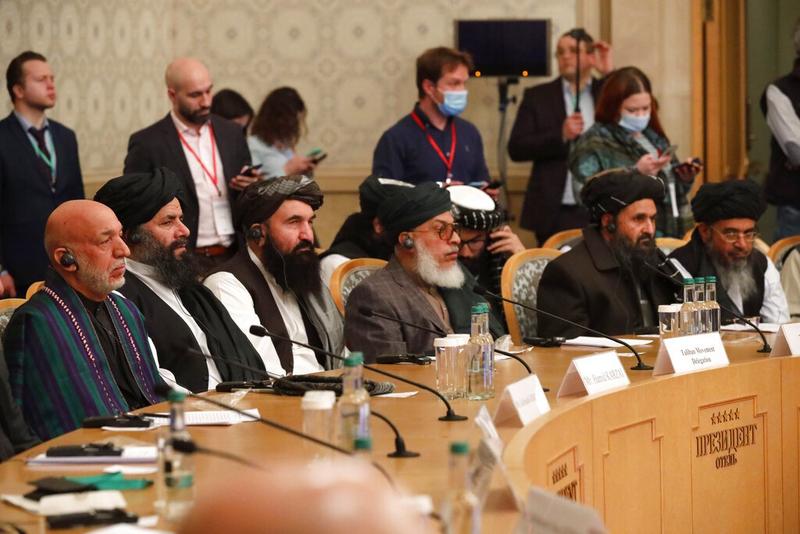 MOSCOW - Russia and the US are working together to persuade the Afghan government to share power with the Taliban even amid an angry response in Moscow after President Joe Biden said he agreed his Kremlin counterpart Vladimir Putin is a “killer.”

The two countries, along with China and Pakistan, urged the formation of an “inclusive government” in Afghanistan and the Taliban to call off its spring offensive at talks in Moscow on Thursday, according to a joint statement. US special envoy for Afghanistan, Zalmay Khalilzad, attended the meeting that included representatives of the warring Afghan sides as well as regional powers, in a rare example of collaboration between the former Cold War foes.

The talks were designed to give a boost to negotiations between the Afghan government and the Taliban in Qatar's capital Doha, stalled lately by government accusations that the insurgents have done too little to halt violence.

Russia said earlier that it hoped international talks in Moscow would breathe new life into the Afghan peace process, after a high-level US official joined the Russian-hosted talks for the first time.

We regret that so far the efforts to launch a political process in Doha have yet to yield a positive result. We hope today's talks will facilitate the creation of conditions to achieve progress in intra-Afghan negotiations.

"We regret that so far the efforts to launch a political process in Doha have yet to yield a positive result," Foreign Minister Sergei Lavrov said in his opening remarks at the talks.

"We hope today's talks will facilitate the creation of conditions to achieve progress in intra-Afghan negotiations."

US envoy Khalilzad's presence was a sign of Washington's increasing effort to attract support among regional powers for its plans for Afghanistan, where it has agreed to withdraw its forces after nearly 20 years.

Khalilzad has been trying to drum up backing for a proposal that includes an interim government and ceasefire, as President Joe Biden reviews plans ahead of a May 1 deadline to withdraw troops agreed under his predecessor Donald Trump.

Moscow, which fought in Afghanistan in the 1980s, has hosted talks among Afghan sides and regional powers since 2017.

Previously, Washington had largely kept its distance from the so-called "Moscow Format".

Arkady Dubnov, a Russian political analyst, said Khalilzad's participation would bolster Moscow's role, and "should, according to the Russian leadership, highlight that a settlement is impossible without Russia".

Nevertheless, an immediate breakthrough is unlikely, given the distance between the Afghan sides, said Andrew Watkins, Senior Analyst for Afghanistan at International Crisis Group.

President Ashraf Ghani objects to an interim government and the Taliban have said they will not join one.

"The Taliban and the Afghan government, in particular President Ghani and his senior officials, have just as much reason to resist," Watkins said.

The Moscow gathering will be followed by a meeting of regional players in Turkey next month and a summit that Khalilzad has asked the United Nations to organize.