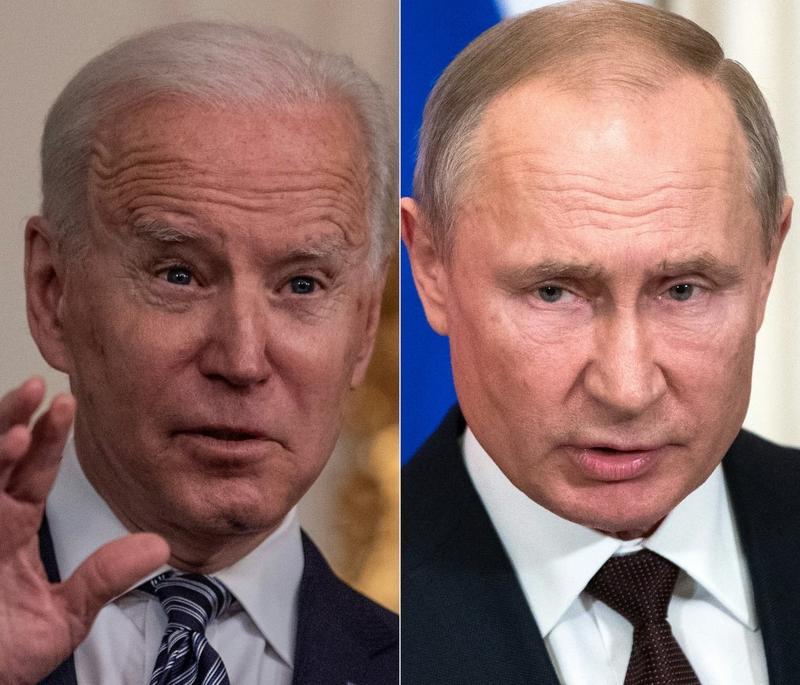 This combination of pictures created on March 17, 2021 shows US President Joe Biden (left) during remarks on the implementation of the American Rescue Plan in the State Dining room of the White House in Washington, DC on March 15, 2021, and Russian President Vladimir Putin as he and his Turkish counterpart hold a joint press statement following their talks at the Kremlin in Moscow on March 5, 2020. (PAVEL GOLOVKIN, ERIC BARADAT / AFP / POOL)

MOSCOW - President Vladimir Putin retorted on Thursday that it takes one to know one after US President Joe Biden said he thought the Russian leader was a killer and already poor relations between Moscow and Washington sank to a new post-Cold War low.

Putin was speaking on television after Biden, in an ABC News interview that prompted Russia to recall its Washington ambassador for consultations on Wednesday, said “I do” when asked if he believed the Russian president was a killer.

Biden also described Putin as having no soul, and said he would pay a price for alleged Russian meddling in the November 2020 US presidential election, something the Kremlin denies.

We always see our own traits in other people and think they are like how we really are. And as a result we assess (a person’s) activities and give assessments.

Russia is preparing to be hit by a new round of US sanctions in the coming days over that alleged meddling as well as over an alleged hack. In a highly unusual move following Biden's interview, Moscow recalled its ambassador to the United States for consultations.

Putin, responding to Biden's characterization of him, said he knew the US leader personally, and, in an apparent reference to Biden's age (78), said he sincerely wished him good health.

Suggesting Biden was hypocritical in his remarks, Putin said that every state had to contend with "bloody events" and added Biden was accusing the Russian leader of something he was guilty of himself.

“I remember in my childhood, when we argued in the courtyard we used to say: it takes one to know one. And that’s not a coincidence, not just a children’s saying or joke. The psychological meaning here is very deep," Putin said.

“We always see our own traits in other people and think they are like how we really are. And as a result we assess (a person’s) activities and give assessments,” he said.

ALSO READ: Russia tells US not to 'play with fire' with new sanctions

In a highly unusual move following Biden’s interview, Russia said it was recalling its ambassador to the United States for urgent consultations over the future of US-Russia ties.

Shortly before Putin spoke, the Kremlin’s spokesman said Biden’s remarks showed he had no interest in fixing ties with Moscow.

“These are really bad remarks by the US president. He has clearly shown that he doesn’t want to improve relations with our country,” Kremlin spokesman Dmitry Peskov said. “We will now proceed from that.”

“Of course, this hasn’t happened before in history,” Peskov told reporters, describing the state of bilateral relations as “really bad”.

Konstantin Kosachyov, deputy chairman of parliament’s upper house, said Biden’s comments were unacceptable, would inevitably inflame already bad ties, and ended any hope in Moscow of a change of US policy under the new US administration.

He said Moscow’s recall of its ambassador was the only reasonable step to take in the circumstances. “I suspect it will not be the last one if no explanation or apology follows from the American side,” Kosachyov said in a Facebook post.

“This kind of assessment is not allowed from the mouth of a statesman of such a rank. This kind of statement is not acceptable under any circumstances,” he added, calling it a watershed moment in US-Russia ties.

Russia’s ties with the West, already languishing at post-Cold War lows since 2014, have come under new pressure in recent months over Russia’s jailing of Kremlin critic Alexei Navalny whose freedom the West has demanded.

Russia has dismissed that as unacceptable interference in its domestic affairs.

The United States has said it is preparing new sanctions against Russia over an alleged hack and the alleged meddling in the 2020 election.

Artur Chilingarov, a pro-Kremlin lawmaker in the lower house of parliament, called for a “tough reaction” from Moscow, in comments made to Russia’s Ekho Moskvy radio station.