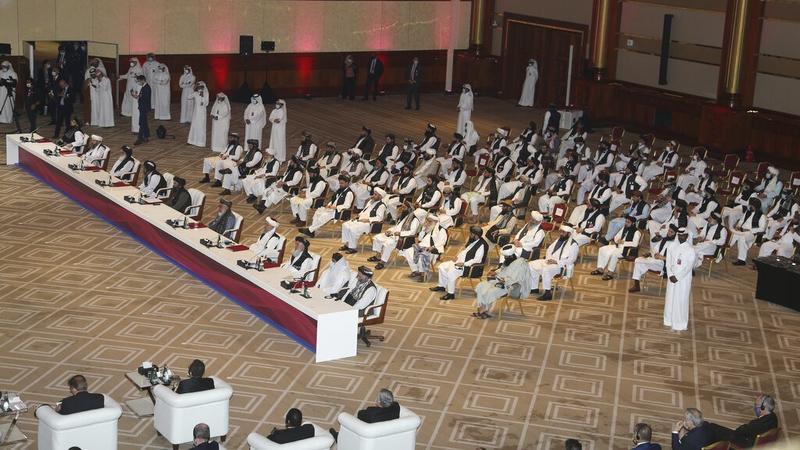 In this Sept 12, 2020 photo, members of the Taliban delegation attend the opening session of the peace talks between the Afghan government and the Taliban in Doha, Qatar. (HUSSEIN SAYED / AP)

ABU DHABI - Afghan peace talks, now stalled in Qatar, should be rotated to other venues, Afghanistan's ambassador to the United Arab Emirates said, indicating the Qatari hosts have not pushed hard enough for the Taliban to reduce violence.

Talks between the Afghan government and the Taliban have been held in Qatar since last year, after the United States agreed to withdraw its troops. But violence has increased and the government accuses the militants of failing to meet obligations to reduce attacks.

Ambassador Javid Ahmad told Reuters peace talks should not be held in one fixed location, but rotate among venues in Europe, Asia, the Middle East or Afghanistan itself.

We want the Taliban to get out of their comfort zone.

The Taliban, which opened an office in Qatar in 2013, were too "comfortable" there, he said. "We want the Taliban to get out of their comfort zone.”

"The Qataris could have used its role as a host to play a more active and decisive role in pushing the Taliban to reduce violence or declare a ceasefire," Ahmad said.

"They have not properly used their leverage, as a host to the Taliban ..., to push the group's leaders to declare a ceasefire or to visibly reduce violence."

Qatar's government communications office said Doha was committed to supporting Afghans by hosting the talks, and would like to see a reduction in violence leading "to continued peace and security in the country".

"The fact that representatives of the Afghan government and the Taliban are still at the table shows that the negotiations are working," it said.

Russia will hold a conference on Afghanistan this week, while Turkey hosts talks next month as the United States seeks to shake-up the process, proposing an interim administration.

Ahmad said Afghanistan's "participatory government" had "the capacity to absorb the Taliban and ex-combatants" but added that the only way to achieve a transition of power was through elections.

The Taliban have said they are committed to the peace negotiations.

Former US President Donald Trump’s administration signed a troop withdrawal deal with the Taliban in February 2020 under which all international forces were expected to leave the country by May 1.

However, violence has risen and NATO officials say some conditions of the deal, including the Taliban cutting ties with international militant groups, have not been met, which the Taliban disputes.