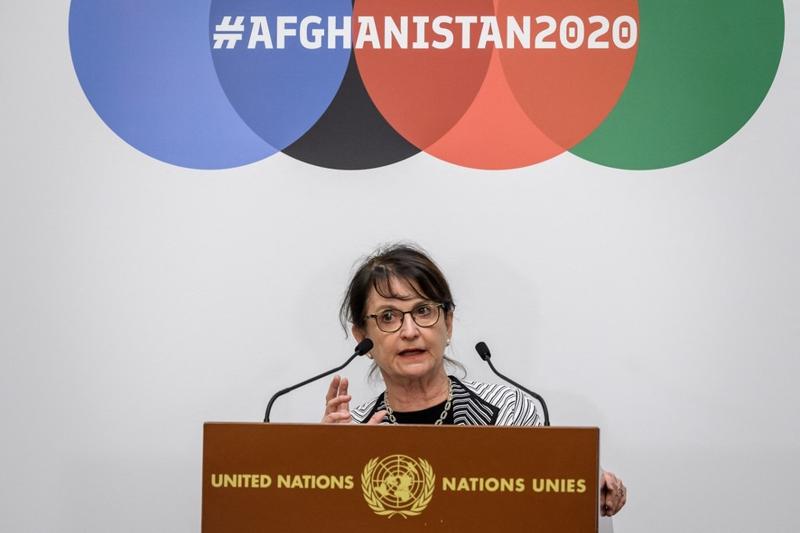 Special Representative of the UN Secretary-General for Afghanistan Deborah Lyons delivers a statement during the 2020 Afghanistan donor conference hosted by the United Nations in Geneva on Nov 24, 2020. (FABRICE COFFRINI / AFP)

DUBAI - The United Nation’s envoy for Afghanistan is due to arrive in Qatar on Tuesday to meet with Afghan government and Taliban representatives this week in a fresh push on the fractious Afghan peace process, two sources familiar with the talks said.

The visit comes as the United States is seeking to shake-up the stalled Qatari-hosted talks between the warring sides, including proposals for an interim government.

These are crucial meetings as the outcome will decide the fate of year-long talks in Doha whether they should be continued or put under a moratorium, one of the sources said

UN Secretary-General’s Special Representative for Afghanistan Deborah Lyons was also expected to with meet US special envoy for Afghanistan Zalmay Khalilzad and Qatari officials during the visit, the sources said.

These are crucial meetings as the outcome will decide the fate of year-long talks in Doha whether they should be continued or put under a moratorium, one of the sources said.

With peace negotiations in the Qatari capital making little progress and violence in Afghanistan escalating, the United States is trying to build consensus around alternative options with all Afghan sides and key regional players.

Khalilzad has visited Afghanistan, Pakistan and Qatar over the past week.

Former US President Donald Trump’s administration signed a troop withdrawal deal with the Taliban in February 2020 under which all international forces were expected to leave the country by May 1.

However, violence has risen and NATO officials say some conditions of the deal, including the Taliban cutting ties with international militant groups, have not been met, which the Taliban disputes.

The US government said on Sunday that all options remain on the table for its remaining 2,500 troops in Afghanistan and that it had made no decisions about its military commitment after May 1.

The State Department comments came after reports emerged that US Secretary of State Antony Blinken had made a new urgent push for a UN-led peace effort, warning the US military was considering exiting Afghanistan by May 1.